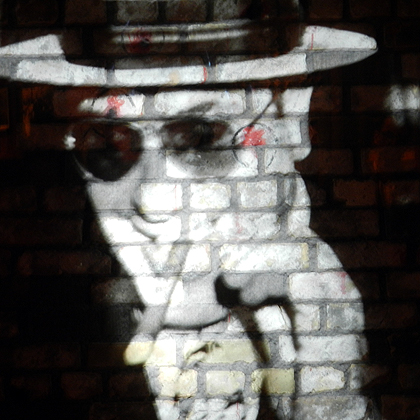 If the gang isn't all there in person -- and they are not -- they are well represented by photos and artifacts. So, Al Capone, (whose image is reflected in a certain wall, right) Bugs Moran, Bugsy Siegel, Moe Dalitz, Meyer Lansky, Lucky Luciano, Lefty Rosenthal, Sam Giancana, Joe Bonano and their crews are there by proxy. J. Edgar Hoover is represented, as is Senator Estes Kefauver and the Kennedys.

These artifacts and photos were seen when the press previewed the realization of an idea former Las Vegas Mayor Oscar Goodman had. He wanted to build a museum in his beloved city that would tell the truth about organized crime. Thus, today, is the opening of what is formally called the "National Museum of Organized Crime and Law Enforcement," but called by most, simply, "the Mob Museum."

Goodman, who played himself as the mob lawyer he was in real life in the movie Casino says, "We have to tell the truth. The truth is, Las Vegas was founded by members of the mob. They became our leading citizens so this museum is founded in reality."

To make the museum a reality, the City of Las Vegas bought the vintage 1933 Federal Courthouse and Post Office, listed then among surplus government buildings, for $1 in 2002. The design and building process, along with the gathering and collecting of artifacts, took 10 years.

The preview "trailer" for the Mob Museum is here:

What Goodman calls the "fulcrum" of the museum is the courtroom where in 1950 Tennessee Senator Estes Kefauver and his committee held hearings into organized crime. The first such events to be televised, the hearings focused the national spotlight to Las Vegas -- the only one of the cities where the hearings were held that had legalized gambling. More and more people came to the city as they read about it, cementing Las Vegas' reputation as the gaming capital of the country.

The investment in the city by organized crime grew by leaps and bounds. This continued until, as clearly seen in the museum, laws and law enforcement -- along with mountains of documentation, years of investigation and a lot of people dedicated to wiping out organized crime -- stepped in.

The story told in the Mob Museum begins where organized crime in the United States began -- with the immigrant experience. With interactive exhibitions (such as having your photo taken in a police line-up), film and an endless number of artifacts, the mob museum tells this very American story.

Dennis Barrie, the museum's creative director, and his wife Kathleen Hickey Barrie, curator of the museum, came to Las Vegas after designing the exhibits in the Rock and Roll Hall of Fame in Cleveland and the Spy Museum in Washington, D.C. Dennis Barrie led the press tour I took.

Gesturing toward one of the many TV screens on the ground floor that feature people talking about their experiences with organized crime, he said, "This is testimony from participants on both sides of the law. We want visitors to be immediately immersed in the criminal justice system in the mid-20th century and to see how organized crime operated."

Organized crime, he said, "started in the east with the immigrant populations -- Italians, Irish and Jews. In 1890, the police chief in New Orleans was killed and that was the first time on record that the word 'mafia' was used. There were lynch parties in New Orleans and the mobs went after immigrants.

"When prohibition came in," Barrie continued, "Chicago became the mob capital of the country. But it didn't stop with just liquor. If the law says 'no' to gambling, prostitution or loan sharking, the mob says 'yes.'"

As Barrie speaks, he leads his group through exhibit after exhibit, each designed to illustrate a point, a facet of organized crime.

The centerpiece of this part of the museum -- and the reason it opens today, on St. Valentine's Day -- is a brick wall. The wall is behind plexiglass and consists of almost 4,000 bricks. Some of these have red circles on them. Pictures of Al Capone and Bugs Moran, along with a few scenes of gun-induced mayhem are projected onto the wall. This, you see, is the wall from the garage on Clark Street in Chicago that was the site of the 1929 St. Valentine's Day Massacre where some of Capone's men, dressed as police, lined up seven of Moran's men and executed them. The red circles on the wall are where bullets struck it.

And so it goes -- room after room crammed with information and history. One area is dedicated to "The Mob's Greatest Hits" and that doesn't refer to music. Another displays a horrifying assortment of weapons. (A visitor may even shoot a Tommy gun.) Walking around, one learns that there was a "method to the murder," with the way a person was killed often indicating why the killing was carried out.

The museum gives lie to the belief, stated by Bugsy Siegel, that mobsters "only kill each other" and that drugs were not the business of the American mob. There's a film about Hollywood and the Mob, narrated by author Nicholas Pileggi, who wrote the book Wiseguy and adopted it into the screenplay for Goodfellas and who also wrote the book and script for Casino. And, because this is Las Vegas' story, there's a section devoted to skimming -- taking money from casinos before it was counted and, thus, taxed. 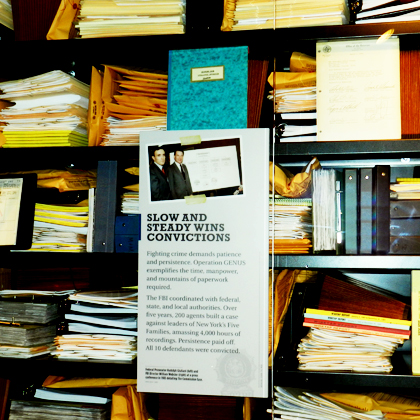 It ended with wiretapping becaming legal if a judge saw sufficient probable cause -- and you can listen to recorded conversations by the mobsters you've read about -- and the passage of the RICO (Racketeer Influenced and Corrupt Organizations Act) law. A small bit of the paperwork amassed as a result of the wiretaps and new law is assembled in the museum. (Photo, right)

As Goodman and others noted, there was some concern voiced in the community that that the Mob Museum would glamorize the mob.

Ellen B. Knowlton, president of the board of directors, was a Special Agent of the FBI for 24 years, retiring as Special Agent in Charge, Las Vegas Division, in 2006. She says, "We've tried not to shade the museum either way. We did a lot of research so we would have an accurate picture of that part of our history."

Jonathan Ullman is executive director of the Mob Museum. He says, "One of the wonderful things about the museum is that there's no glorifying the subject matter. If anything's celebrated it's the heroic efforts of law enforcement. These individuals who spent years working undercover made an amazing sacrifice for the good of everyone.

"A number of people are nostalgic about the mob era," Ullman says. "Some people have very strong feelings that this town is much better without organized crime, but others feel it was better with it. The mob has been mythologized and romanticized."

"The psychology behind all of this is really fascinating," he adds. "What drives people? Is it the thrill of being near power and near people who do what they want?"

Asked if he could tell people one thing about the Mob Museum, Ullman said, "I want people to know that this is both a highly entertaining and educationally rich experience. We have real artifacts that tie people to actual events in a very dynamic presentation."

Goodman predicts, "People will find a visit to the museum to be riveting."

And, if the press preview was any indication, both Ullman and Goodman are absolutely correct. You can bet on it.

Below, you can look "Inside The Mob Museum:"