It wasn't a projectile or ammunition that destroyed this truck. But rather, a laser: 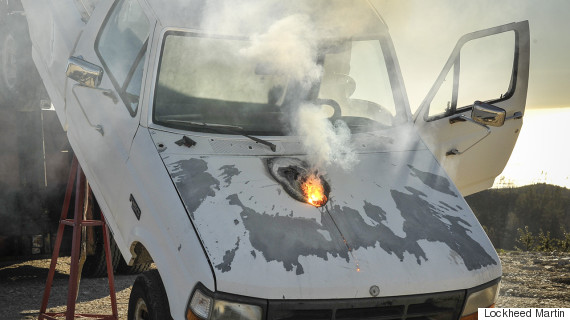 Defense and aerospace company Lockheed Martin announced this week that its new fiber-optic laser weapon system, dubbed ATHENA (Advanced Test High Energy Asset), successfully took out a small truck “from more than a mile away” during a recent field test.

The ATHENA system uses a technique called "spectral beam combining," which involves merging multiple laser modules to create a single and super-powerful 30-kilowatt laser beam. The system is described as having the “highest power ever documented by a laser weapon of its type."

“To put that in perspective, the laser in an everyday pointer might be about 1 milliwatt, or 3 million times less,” said Motherboard.

The truck had been resting on props for the field test, but its engine and drivetrain were reportedly running to simulate a real vehicle threat. The laser is said to have disabled the truck’s engine in a “matter of seconds.”

Rather than causing the engine to explode, as per Hollywood, the truck was simply rendered unable to move. Reading between the lines, perhaps Lockheed believes that the gear will be a useful, potentially non-lethal precaution against explosive vehicles being driven, at speed, towards infrastructure points, guard towers or military bases.

Keoki Jackson, chief technology officer of Lockheed Martin, said in a statement that the ATHENA test “represents the next step to providing lightweight and rugged laser weapon systems for military aircraft, helicopters, ships and trucks.”

1
Invisible Death Ray
This is the US Military's Active Denial System, or ADS. It's a truck-mounted high-powered microwave weapon that when directed at a person or crowd can produce a severe burning sensation of the skin. The Pentagon worked on the system in the hopes of finding a non-lethal crowd control weapon that could replace the water cannon. It's non-radioactive, non-lethal and safe to use, however it has caused controversy over the effects it causes to the body.
2
Hypersonic Missile
The X-51A WaverRider is a terrifying response to America's increasing military commitments around the globe. Using a revolutionary scram jet engine, the missile is able to reach the hypersonic speed of Mach 5. Once trials are completed it will give the US Military a missile that can hit any target in the world from the US, within an hour.
3
Giant Laser Cannon
The laser cannon has arrived, no longer will it be relegated to SyFy TV shows and Star Wars. The US Navy's directed energy weapon fires a highly concentrated laser at incoming targets and is capable of destroying drones, small boats and missiles. While the laser is highly advanced the military designed it to be easy to use with game controllers being the main form of input.
Advertisement
4
Robot Soldiers
The QinetiQ MAARS or Modular Advanced Armed Robotic System, is essentially a small robot tank. It's a track-based robot that happens to contain a large machine gun, grenade launcher and a myriad of targeting sensors. While the weapons are controlled by a human, the robot has been designed for defence and patrol so it'll use in-built AI to help it follow troops or patrol a base.
5
Self-Aiming Rifle
The TrackingPoint XS1 poses a worrying question for the future of armed warfare. With a state-of-the-art connected scope, the holder simply tags the target and the gun's sensors work out distance, wind speed and elevation showing you exactly where you need to aim. Gone are the days of sharpshooters, replaced instead with scopes that'll work through Google Glass and help you fire through walls.
6
The Railgun
The railgun started life as a mythical weapon that often appeared in video games and sometimes showed its face in films (Transformers: Revenge of the Fallen). Using electromagnets to hurl a metal slug at hypersonic speeds, this weapon is the future of artillery and small arms, and now the US Navy has one. Constructed by BAE Systems, the railgun prototype can fire a metal slug at over Mach 6 and at a target over 110 kilometres away.
Advertisement