The Arctic is one of the most extraordinary, unique, and threatened regions in the global biosphere. It is suffering effects of climate change more severely than elsewhere, with dramatic ecological and cultural consequences. Arctic sea ice has declined precipitously, permafrost and the Greenland ice cap are rapidly melting, ecosystems are declining, and coastal villages are moving to higher ground.

But rather than intensifying efforts to protect the struggling region, governments and industry are instead rushing to exploit the increasingly ice-free Arctic for oil and gas, minerals, shipping, fishing, tourism, and military interests. Combined with the effects of climate change, such massive industrialization would further accelerate environmental decline. We need a new approach to the Arctic, and soon.

This year will be pivotal for the future of the Arctic. The U.S. assumes the chairmanship of the eight-nation Arctic Council next month; the Obama administration is considering legacy conservation actions in its final years; Arctic nations will make long-term decisions regarding resource development; and there is a real opportunity to reach agreement at the UN Climate Change Summit in Paris this December to significantly reduce global carbon emissions. This year may be our last best chance to secure permanent protections for the Arctic, but this will only happen with bold political leadership.

The U.S. Geological Survey estimates that the Arctic may hold 20% of the world's remaining oil and gas reserves, most of which are offshore. Although temporarily slowed by low oil prices, the Arctic offshore oil rush is very much still on. After its calamitous failure offshore Arctic Alaska in 2012, Shell is planning to try again this summer, and has the administration's support. Other companies are drilling in Arctic waters off Greenland, Canada, Russia, and Norway. If offshore drilling goes forward, there will be chronic degradation, and there will be major spills. 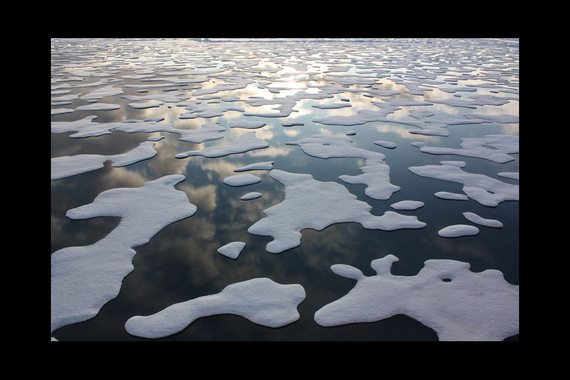 The irony of all this is that the billions of tons of carbon produced from the Arctic Ocean would ultimately wind up in the global atmosphere, further accelerating the climatic warming that is so disastrous for the Arctic. Some scientists conclude that, in order to stabilize climate, 80% of the world's remaining hydrocarbon reserves need to stay right where they are - in the ground and seabed. There is no better place to start backing away from our hydrocarbon addiction than in the Arctic.

Arctic governance today is a sort of 'tragedy of the commons,' with each of the eight Arctic nations, including the U.S., advancing its own parochial interests within (and outside of) the Arctic Council, and in something of a panic to develop its Arctic resources as fast as possible. Politicians pretend this is meant to help Arctic peoples, but in reality it is more about corporate profits and extracting resources for economies to the south. Each Arctic nation has adopted its own Arctic Policy, and all are focused on short-term commercial exploitation and strategic dominance rather than long-term environmental protection and sustainability. This is a no-win race toward Arctic destruction.

As the U.S. assumes the chairmanship of the Arctic Council next month, the Obama administration has an historic opportunity to create a new Arctic paradigm that protects this extraordinary place for all people, for all time. But first, we need to lead by example.

- The U.S. should be the first Arctic nation to 'just say no' to more Arctic offshore oil. If the Obama administration is unwilling to do such (which seems the case), it needs to at least impose the highest possible safety standards for offshore drilling (which it has yet to do).

- President Obama should use his executive authority to establish permanently protected Marine National Monuments in Alaska's Aleutian Islands, Bering Strait, and Arctic Ocean. It is not enough for the administration to simply extend the limited, pre-existing offshore drilling withdrawals for Alaska's Bristol Bay, Chukchi Sea, and Beaufort Sea: these withdrawals could be eliminated by congress or the next president, they leave most Arctic offshore areas open to drilling, and they don't address the many other risks to the Arctic marine environment. We urgently need more Arctic marine protections.

- The U.S. must commit to deeper and faster cuts in our domestic carbon emissions, and make good on that commitment.

With this foundation, the U.S. should negotiate a comprehensive Arctic Treaty with other Arctic and non-Arctic nations, similar to the Antarctic Treaty, to protect and sustain the region as a common heritage of all humankind. The Arctic treaty should enact the highest possible environmental protections across Arctic waters and lands of all Arctic nations; prohibit extended continental shelf claims; establish a circumpolar network of protected areas, including in international waters around the North Pole; and make the Arctic a nuclear weapons free zone. And the Treaty should refocus Arctic economic development away from finite extractive resources, to long-term sustainability.

Most importantly, the U.S. needs to make every effort possible to reach a legally binding deal in Paris this December to immediately and significantly reduce global carbon emissions. Just since the UN Climate Treaty was agreed in 1992, global carbon emissions have almost doubled. Paris may be our last best hope for turning the tide on climate change. This will at least slow, and perhaps someday begin to reverse, the melt of Arctic ice.

Society has a historic choice to make with the Arctic. Should we continue our industrial expansion into one of the last wild areas of the world, further degrading its environment? Or, should we choose to protect and sustain this magnificent place? We can't have both. Our choices in 2015 will tell us a lot about what the Arctic's long-term future will be. Let's hope we choose wisely.

To learn more about how you can help, consider hosting and attending our Imperiled Arctic presentation in your community this year.