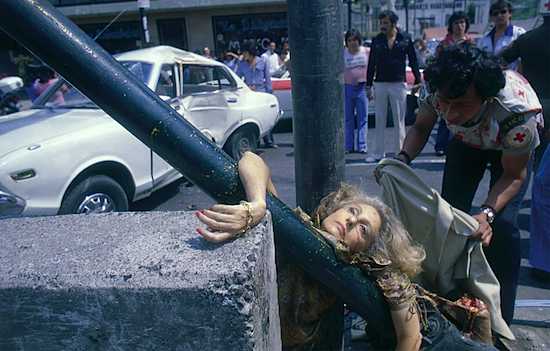 Enrique Metinides, Mexico City, 1979, courtesy of the artist and the Zabludowicz Collection

Two of the strongest shows to open this Fall illuminate the work of two of the Bay Area's most thoughtful and talented curators, Joseph del Pesco and Natasha Boas. In "City of Disappearances," a haunting and provocative collection of works at the CCA Wattis Institute for Contemporary Arts, del Pesco and London-based co-curator Elizabeth Neilson explore the conceptual and personal narratives created by the City - with a capital C. In "Energy That Is All Around," at the San Francisco Art Institute's Walter & McBean Gallery, Boas has painstakingly amassed a unique, one-in-a-lifetime collection of the artworks and artifacts of a group of infamous artists known as the "Mission School." Though completely different in subject and tone, both will resonate powerfully for days to come.

But they're also about to close, so schedule a special trip to catch them both by this Saturday, December 14th.

Cities are, by definition, full of strangers.
-Jane Jacobs, journalist and urban critic

A stark yet elegant display of photography, video, and sculptural installation, "City of Disappearances" was conceived as an experimental curatorial collaboration and exchange between two esteemed international private collections, the Kadist Art Foundation (based in Paris and San Francisco), and the Zabludowicz Collection (based in London, with other permanent venues in Finland and the US). The exhibition also is inspired by Londoner Ian Sinclair's psycho-geographic anthology, "London: City of Disappearances," (2006) as well as Bay-Area based writer Rebecca Solnit's 2010 atlas of San Francisco, "Infinite City." This conceptual and metaphorical exchange of ideas parallels a real one, when the exhibition travels to the Zabludowicz Collection in London next year. (Here, the title of the show is "City of Disappearances," and when in London, it will be titled, "Infinite City.")

Since 2007 the majority of the world's population lives in cities, and these artworks reflect the reality that cities have become a primary vehicle for framing and shaping experience. del Pesco notes, "[T]he physical and social experience of 'the city' is a universal language - a language of skyscrapers, traffic, human density, technology, affluence, poverty, and violence...and urban denizens play an increasingly critical role in setting the priorities of global culture."

Such density, nonetheless, can make people feel even more alone than ever -- a contradiction made even more evident by the photographs of Enrique Metinides, the anchor for the show. A wall-sized suite of Metinides' photos is displayed in the Wattis Gallery window, so can be viewed when the gallery is closed. He spent 50 years working as a crime photographer for the Mexico City daily tabloid, La Prensa, in a culture where the tabloid highlighted not celebrity, but the dirty realism of crime, gore, disaster, and death (along with scantily clad women). The shots of crash scenes and suicide attempts are particularly disturbing, yet also convey an intense intimacy -- a sense further enhanced because Metinides did not use any telephoto lenses, so frequently was only inches away from his recently deceased subjects. The scenes evoke a curious mixture of horror, pity, and empathy, along with an acute awareness of our own mortality. 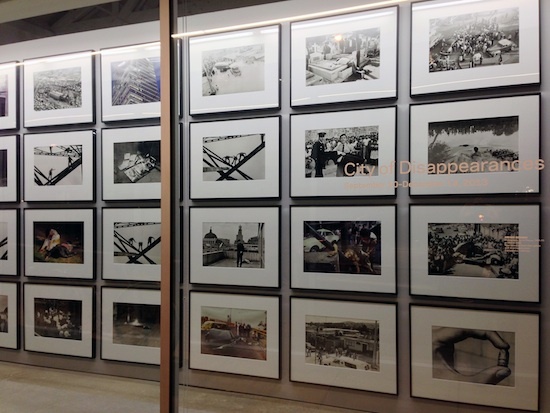 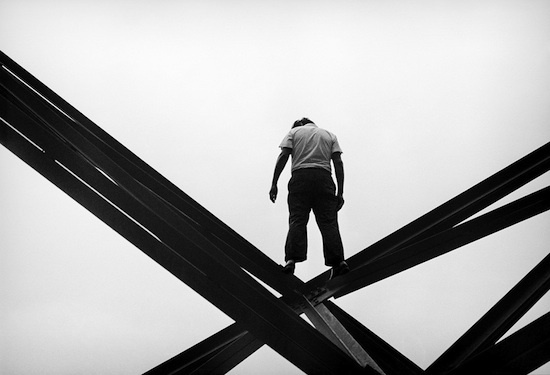 Enrique Metinides, Mexico City, 1971, courtesy of the artist and the Zabludowicz Collection

The installation of sculptural work by Martin Boyce "brings the city inside" del Pesco notes. This interior city comprises a minimalist "disembodied park" with glowing, barren neon trees, a benchless park bench, an artfully graffitied phone booth, and what looks like a trash can fighting a stiff wind. Set off by the gallery's cool cement floor, it brings to mind the midnight cityscapes of noir New York, punctuated only by the occasional streetlamp or neon sign. 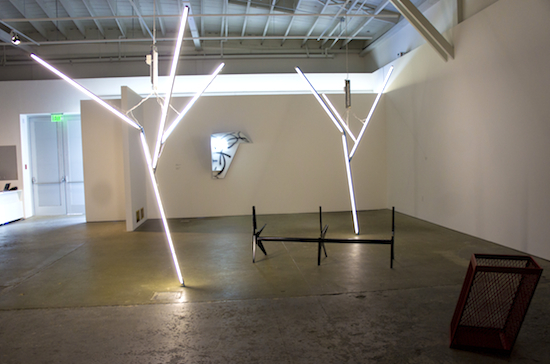 Installation of work by Martin Boyce, courtesy of the Kadist Art Foundation and the Zabludowicz Collections

Slater Bradley's video piece, "Female Gargoyle," brings home the reality of human vulnerability and defeat through an amateur video of a woman perched alone on a corner precipice of a building roof. The video zooms in to capture her smoking a cigarette, contemplating the world a dozen stories below, clearly indecisive as to what she will do next. Zooming out, the video catches in the far right corner of its frame a shot of her tiny body dangling at the building's edge, with only a vast expanse of blue sky below - further underscoring our perception of her mortal loneliness. 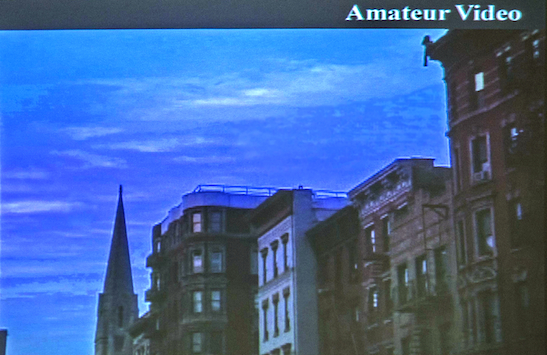 Two other video installations illuminate the human need -- if not compulsion -- to form some sort of connection with place as an integral part of our identity. Yelena Popova's Unnamed documents the Russian city in which she grew up, a town secretly established in 1945 during the Soviet era as a base for manufacturing plutonium. The town -- which created enough plutonium for Russia's first atomic bomb -- was so secret that it was omitted from any maps, yet it grew to 55,000 and, for all intents and purposes seemed no different than any other town of its era. But when a nuclear disaster occurred in 1957, the town's virtual non-existence prevented any news of the tragedy from coming out (an event that was only revealed decades later). Popova's documentary tracks her own conflict in the impossible task of framing one's history and childhood in a town that wasn't supposed to exist. 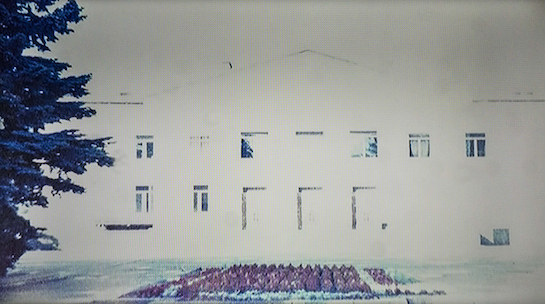 One of most striking works, one that circles all of the themes in the show, is Amie Siegel's "Berlin Remake." Siegel pairs segments of found cinematic footage, all shot in Berlin, with painstakingly recreated re-stagings of those moments in the same, exact locales. The city and its inhabitants shift and morph across time, from the shot of a lost woman in a subway station being used during wartime as a makeshift hospital, to a contemporary shot of a lost-looking woman in that same subway space, now emptied of its ghosts, and populated instead by bored commuters. The film reminds us of the fluidity with which lives come and go, the inevitable passing of time, and our own mortality - and, most important, that the only thing that remains constant is the city itself.

I like things that are handmade. I like to see people's hand in the world,
anywhere in the world; it doesn't matter to me where it is.
Margaret Kilgallen, artist

Across the city, In a completely different vein, curator Natasha Boas explores how a group of like-minded and like-spirited artists can create a singular aesthetic -- and perhaps even a bonafide art movement -- in ENERGY THAT IS ALL AROUND at the San Francisco Art Institute Walter & McBean Galleries. Featuring over 130 early and formative works by Chris Johanson, Margaret Kilgallen, Alicia McCarthy, Barry McGee, and Ruby Neri, ENERGY THAT IS ALL AROUND highlights the group's careers in the early 1990s in San Francisco's Mission District, and tracks how they subsequently became identified and celebrated as key members of the so-called Mission School.

The Mission School was best known for its "street" aesthetic -- where art-making was made not in the studio, but in the streets and with others. Also common among them was the embracing of low-production values, social art-making, collaboration, community, folk art, and a nostalgia for the obsolete. The artists typically used found and reclaimed materials, decorative patterning, cartoons, and hand lettering, and would create works on found sheets of scrap metal along with prepared canvases. It is evident from both their processes and aesthetic that Mission School artists were strongly influenced by Bay Area Figuration, the Beat movement, Funk art, and punk, and all of them had a relationship of some sort with the San Francisco Art Institute. 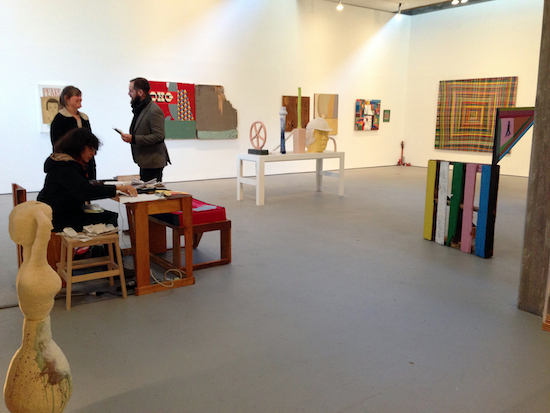 "Energy That Is All Around" at the San Francisco Art Institute, through December 14, 2013 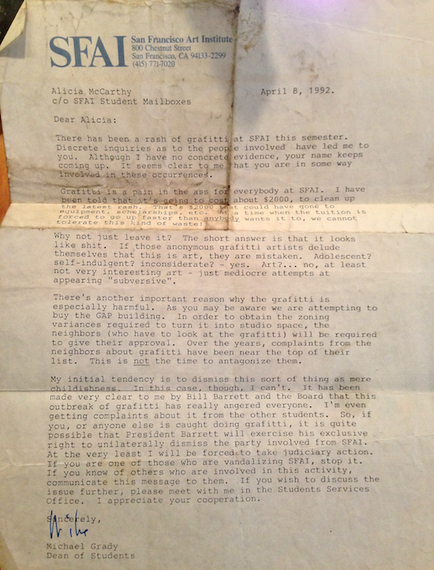 A 1992 letter to artist Alicia McCarthy from the Dean of Students at the San Francisco Art Institute, complaining about her graffiti art

One of the best known of the group is Barry McGee, a lauded and much-respected cult figure among skaters, graffiti artists, and West Coast surfers. McGee, who received a BFA in painting and printmaking from the San Francisco Art Institute, rejects the formality of traditional art practices, incorporating elements such as beer bottles, found picture frames, and rusted signs in his work. He also is a graffiti artist since the 1980s, where he is known by the tag name "Twist;" he considers graffiti a means of communication that is able to transcend the traditional spaces of a gallery or museum. His trademark icon, a caricatured male figure with sad, sagging eyes, references the transients who call the streets their home. "Compelling art to me is a name carved into a tree," says McGee. Despite this seeming anti-establishment philosophy, his work has been shown at the Walker Art Center in Minneapolis and the San Francisco Museum of Modern Art, along with continuing to appear on streets and trains all over the country. 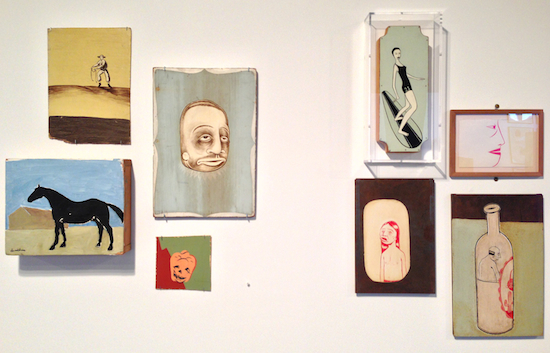 Work by Barry McGee and Margaret Kilgallen, from the "Energy That Is All Around" Exhibition at the San Francisco Art Institute, courtesy of the artists and private collections

Another seminal figure in the group was Margaret Kilgallen, McGee's late wife. A printmaker, her early experiences as a bookbinder and librarian and her love of the art of hand-painted signs strongly influenced her aesthetic. She would paint directly on odd surfaces, such as freight trains, walls, and skateboards. She developed a set of signature figures, women who seemed inspired by folk art, yet who surfed and smoked cigarettes. She wanted to portray women who could be "visual in our everyday landscape, working hard and doing their own thing". Typography also became a major theme, using large letters executed in a distinct palette of reds, yellows and browns. Tragically, Kilgallen died of breast cancer at 33 in 2001, but not before creating a powerfully resonant, definitive body of work.

Another huge force in the Mission School is the artist Chris Johanson, whose paintings and sculptures combine rough, yet sophisticated, almost cartoon-like figures with handwritten text exploring the human condition. Asked about the motivation behind his art, Johanson remarked, "life is about looking at and being a part of life. We need to be a part of each other. If we separate we are alone. That is a world of walking dead people. That is why I make art, to talk about how important it is to stay in the now and look at life." The way Johanson looks at life is reflected by the abundance of his thoughts expressed in his artworks, revealing a smart, dry wit. The work manages to be meditative, yet humorous and confrontational. 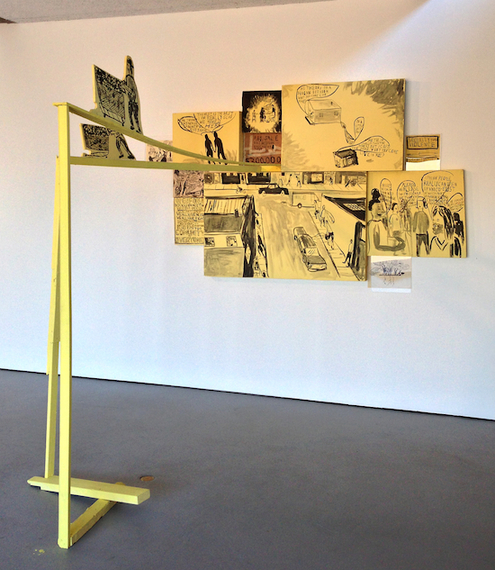 The combination of the personal art collections and artifacts of the artists (acquired contemporaneously with the developmental period of their "movement"), along with the show's careful staging, demonstrating the evolution of each artist's work, makes for an unusually rich and enlightening experience. It took years for Boas to source and connect work and ephemera produced at the beginning of the artists' careers (much of which has remained in their personal or peer collections), and she combines it with vibrant new work created just for the exhibition. If one ever wanted to witness how an entire art movement can be inspired and evolve, this show is not to be missed.

Throughout history, art movements are characterized by a group of artists possessing a tendency or style in art with a specific common philosophy or goal, all working during a specific period of time. Within this exhibition, a common energy, process, aesthetic, and, one might argue, palette clearly link the works, lending further credence to the propriety of art critic Glen Helfand deeming the group the "Mission School."

ENERGY THAT IS ALL AROUND closes at the San Francisco Art Institute on Saturday, December 14th, and will travel to Grey Art Gallery, New York University, April 15-July 12, 2014. For more information, see this link.