Whenever I visit Philadelphia (as I did late last month), I indulge my morbid fascination for the slow-motion death of a great single-collector facility -- a serene treasure house displaying some of the world's greatest Cézannes, Matisses and Renoirs. It is soon to be interred at the construction site of the new home for the Barnes Foundation on the Benjamin Franklin Parkway, scheduled to open in late spring of next year.

Construction is now so far along that, notwithstanding the new desperation lawsuit by opponents to the Barnes' move (from its original home in Merion, a Philadelphia suburb), there's no tearing this thing down. We can only hope that they do a decent job in building it.

Here's my photo of the mega-Barnes' most distinctive (some would say obtrusive) feature, designed by architects Tod Williams and Billie Tsien -- a jutting light box looming over the facility (which, at this moment, is merely a frame that looks like an Olympic diving board): 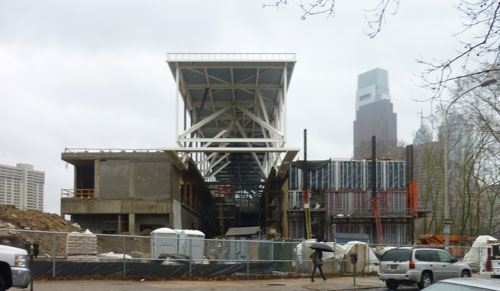 Here's what that feature may ultimately look like, as depicted in a rendering by the architects. (This is a screen shot from my CultureGrrl Video of the architects' presentation to the Philadelphia Arts Commission, which took place more than a year ago): 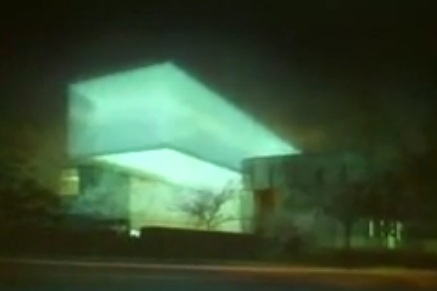 Here's a recent view of the entire project, at dusk, taken by the Barnes' webcam. You can see how the part of the building that will replicate the original Barnes Foundation's layout -- the dark rectangle to the left -- is enveloped and dwarfed by the new entrance pavilion for special exhibitions, classrooms, auditorium and visitor amenities. The Barnes Collection galleries, accounting for some 12,000 square feet of this 93,000-square-foot building, are at risk of being upstaged: 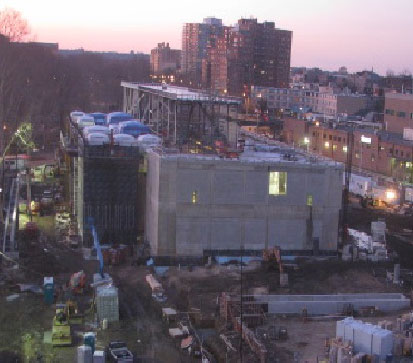 Screenshot from the Barnes' webcam

Barnes spokesperson Andrew Stewart recently gave me this update on the construction's progress:

The gallery building which will house the permanent collection should be finished by the end of this summer. At the moment, the construction team is putting up the stone all around the exterior of the building. Inside the gallery building, they are plastering the walls and finishing installing the windows and clerestory on the second floor. The steel framing was completed back in January.

Good luck to the stubbornly persistent opponents of the move. But their latest court filing is an attempt to close the Barnes door after the horse has escaped to Philadelphia. Recognizing that there's no stopping this well-advanced construction, one of the litigants has futilely suggested that the facility be repurposed as a museum for contemporary art, craft and design -- MAD on the Parkway?<

The new legal petition is mostly a rehash of arguments that were already rejected by Judge Stanley Ott of Montgomery County Orphans' Court the last time the opponents tried to reopen the case. (They were rebuffed due to lack of legal standing.) Their one new idea is that "the Attorney General, without disclosure to the court, was involved in forcing the change of the Barnes board to allow the transfer of the art collection from Lower Merion to Philadelphia. The Attorney General absolutely violated his fiduciary duties by taking an improper role and without advising this Honorable Court of that role."

True enough. This argument is based on the then Attorney General's and then Governor's shocking did-they-really-say-that moment (detailed by me in this post), which was captured in filmmaker Don Argott's Barnes exposé, "The Art of the Steal."

But Judge Ott made clear in his initial ruling (with which I strongly disagree) that he deemed the move to be the most viable, least drastic solution to saving the financially beleaguered Barnes, notwithstanding what he regarded as the shockingly inadequate job done by the Attorney General's office in representing the people's interests and written wishes of the deceased founder, Dr. Albert Barnes, who explicitly stipulated that his holdings were always to remain in the exact spots where he had left them.

The new argument raised by the petitioners might be cause for an investigation of the former AG's divided loyalties and possible misconduct. But I suspect that none of this would, at this late hour, have any effect in halting the project.

Responding to the new petition, the court has directed the Barnes to "show cause why the matter should not be reopened." They'll be dusting off their old briefs for a court appearance scheduled for this Friday.

As for the amount raised thus far towards the Barnes' $200-million goal, Stewart told me, "We have not released any new details recently" -- not a good sign. (As of July 2009, some $156 million had been raised.) With projected building costs having escalated from $100 million to $150 million, the Barnes had lowered its goal for its endowment from $100 million to $50 million -- also not a good sign. Building a large, ambitious new facility without raising a commensurately large endowment would be a prelude to yet another Barnes financial debacle. Fundraising had previously been a slow-go. In a Los Angeles Times opinion piece last week, Tom Freudenheim and Robert Zaller did some number crunching of the Barnes' economic projections and concluded that "no major museum in the country sustains itself on such a model."

While the mega-Barnes takes shape, you should pay your final respects to Dr. Barnes' Barnes. enjoying the intimacy of this jewel-box art showcase while you still can: July 3 is the final day on which you can admire at least a portion of the original galleries, which are widely acclaimed and soon to be mourned by art lovers around the world.

You'll be too late for the second floor, however: It's already closed.