This piece contains spoilers about "The Last Man on Earth."

The only critic on Earth who doesn't like Fox's "Last Man on Earth"? You're reading her right now.

It's not strange for there to be an outlier on a show that has otherwise enjoyed a positive consensus. It happens, and I respect the opinions of critics and viewers who enjoy the show. But I found the one-hour series premiere of "Last Man" truly difficult to get through. I could see attempts to improve certain aspects of the show in the episode that airs March 8, but in that installment, "Last Man" doubles down on some extremely questionable decisions. There's no getting around it: There are just big problems in the execution of this engaging premise, and I doubt I'll be able to get beyond what I've already seen, given how regularly the show turned me off in the early going.

This reaction is almost shocking to me, given that I'm a fan of "21 Jump Street," "22 Jump Street" and "The Lego Movie," the hit films on the resumes of "Last Man's" executive producers, Phil Lord and Christopher Miller. Those movies aren't just wryly self-aware and laugh-out-loud funny, they have a lot of heart, but that element is often missing on "Last Man." The comedy is truly disappointing when it comes to both character development and gender issues.

The premise is pretty easy to figure out from the name of the show, which opens with Phil Miller (Will Forte) roaming the country looking for any other sign of human life. With no loved ones or friends left, Phil devolves into a sad Everybro, a bearded schlump who uses the pool of his McMansion as a giant toilet.

I might have found Phil's slob qualities funny or charming or something if he were even a little bit specific or compelling, but throughout the premiere and in next week's episode, he's little more than a sad sack with extensive facial hair. It's not a problem that Phil's pretty depressed about the end of the world (though it's a weirdly tidy apocalypse -- there's no sign of the billions of bodies that you'd think would litter the uninhabited planet).

But it is a problem that during the 66 minutes I spent watching this show, I never had much cause to vary my assessment of Phil, who is consistently a self-pitying, predictable bore. You may have found his attempt to hit on a mannequin funny; I found it vaguely creepy and slightly boring. I should have cared that humanity would have died out if Phil kicked the bucket, but considering the sour impression he makes, I would have been at peace with that development.

Occasionally Phil is reasonably interesting and isn't just a generic man-child, but even if I warmed up to the cranky beardo in a big way, the show is still an enormous bummer on the gender front. If you want to spend some time watching a man roll his eyes and sigh and complain about a woman who's making demands on him, "Last Man on Earth" has got you covered. The last place I expected to find a narrow, nagging cable wife was on a broadcast network comedy made by the "Lego Movie" guys, but life is full of surprises, I guess.

It makes me sad and angry to think about how Kristen Schaal's character, Carol, was introduced in the pilot: Phil regains consciousness after passing out and has an intense vision of the woman who is caring for him as he wakes up. They end up kissing passionately. Then the vision of the first woman fades away and we see that Phil is getting mouth-to-mouth resuscitation from Carol. He screams.

Any comparison I make between the two actresses will just propagate troubling paradigms about conventional measures of attractiveness, and given how gross the sequence made me feel, I just don't want to go there. The point is, it's hard for me to think of a reason for that sequence that is justifiable on a comedic or dramatic basis. It's hard to escape the implications of Phil's reaction to Carol in that moment, a reaction that is reinforced in later scenes. In general, "Last Man" appears to be pitying Phil for being stuck with the last woman on Earth -- with the kicker being the idea that he doesn't truly want to have sex with her. Even after she cleans up his house.

The fact is, the writing for Carol is frequently awful and one-note and generally casts her into the thankless role of the hectoring woman who exists to remind a lead male character of rules, laws and social norms. It's generally not a great look for any character, but it's the kind of character that women on TV are frequently thrust into, even on ambitious dramas that should know better. You would think a comedy that ignores a lot of other sitcom conventions would not hew so slavishly to those tired gender patterns, but when it comes to "Last Man on Earth," you would be wrong.

The thing is, Carol as a mega-buzzkill might be just fine if she had a bunch of offsetting positive qualities or if her killjoy inclinations produced solid comedic beats. But they generally do not. The next episode has a few moments of more human and grounded interactions between the two leads, but you also have to sit through a Phil pity party that includes the line, "You pester me worse than my mother." 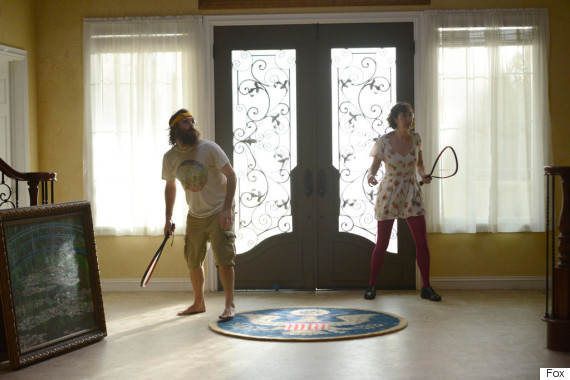 Another show debuted on Sunday night, too, and though it had the exact same Metacritic score as "Last Man," you might have not read about it just yet. It's the cop show "Battle Creek."

Written by "Breaking Bad" creator Vince Gilligan before Walter White became a household name, CBS dusted off the project and picked it up following the success of the landmark AMC series. (Gilligan went off to make "Better Call Saul" in the Albuquerque desert after "Breaking Bad" ended, so "House" creator David Shore came on board to act as executive producer and showrunner.)

That's a very shiny list of bona fides for the show -- which, like "Last Man on Earth," focuses on a mismatched pair who continually irk each other. But the most relevant thing to know about "Battle Creek's" lineage is that it airs on CBS, a network that efficiently and firmly keeps its procedurals within a fairly narrow range. CBS procedurals are rarely outright bad (aside from the occasional super-stinker like "Stalker"), but they're rarely all that ambitious either. Don't expect a quirky, Gilligan-flavored "Breaking Bad" starring bickering cops instead of squabbling meth dealers, because it's not quite that.

All in all, the quirk factor on "Battle Creek" pretty low, but it is on the lighter side of the CBS spectrum. An episode centered around a cereal festival that gives a guest role to Patton Oswalt is not going to remind you of "Stalker," that's for sure. "Battle Creek" is pretty conventional, all things considered, but as it gains steam, it manages to find some texture and even a bit of romance and pathos amid the cases of the week.

CBS was smart to send all 13 episodes of Season 1 of "Battle Creek"; it's odd to be able to say, months before it arrives, that the finale was quite good. That said, it took a while for the show to grow on me. Early on, Josh Duhamel was able to give just enough hints of secretive depth to Milt Chamberlain, his too-good-to-be-true FBI agent, but the writing for Russ Agnew (Dean Winters), the Battle Creek cop he's paired with, could make the Midwestern law enforcement officer a little too abrupt and combative at times.

Towards the second half of the season, "Battle Creek" found a good balance of snark and partnership, and though I continually wished the rest of the cast got more to do, Janet McTeer, Kal Penn and Liza Lapira were particularly good in their supporting roles.

Someone on Twitter asked if "Battle Creek" seemed like a summer show, and that's a pretty good description of it. It wouldn't seem out of place on USA Network, and that's not a backhanded slam by any stretch. Once Duhamel and Winters settle into a rhythm and begin showing more nuanced aspects of their characters, I began to enjoy "Battle Creek" for the light, reasonably well-constructed crime drama that it is, and as the season develops, Shore is able to do a few interesting things with the question of whether people can truly change.

But hey, CBS, you can totally tell it's shot in Los Angeles. The tipoff: It's way too sunny all the time, and over the course of 13 episodes, I didn't spot even one flake of snow. Perhaps "Battle Creek" is also set in a post-apocalyptic world, one in which global warming has left the upper Midwest permanently summery and Josh Duhamel permanently tanned.

I could live with that kind of apocalypse.

Ryan McGee and I discussed "Last Man on Earth," "Peaky Blinders," "Marvel's Agent Carter," "Saturday Night Live" and "Parks and Recreation" on the most recent installment of the Talking TV podcast, which is here, on iTunes and below.