"I'm going to be the last herder of my family," said Erdenemunkh, a nomad living in Central Mongolia. We were sitting in his cozy ger -- or Mongolian yurt -- drinking salty milk tea, a staple of the Mongolian herding diet.

"I'm going to do everything to send my kids to school," Erdenemunkh continued. I glanced at his 9-year-old daughter playing with her 3-year-old brother. They had no idea that their lives were going to be drastically different from their father's, or from the millions of herders who had carried on Mongolia's ancient nomadic tradition for millennia.

In Mongolia, as in other parts of the world, this century is proving to be an era of fast and furious change. Modernization, a new economic system, opportunities in mining, and the effects of overgrazing and climate change are nudging an ancient nomadic culture to adopt a more urban, settled lifestyle. Erdenemunkh is just one herder out of many all across Mongolia who believes the era of herding is over: He has decided that his children will not be herders, and like many others, he will be the first in his family to break the generations-old tradition of passing down the family herd to the youngest child. Erdenemunkh has many reasons to leave the ancient lifestyle behind. This year, his Central Mongolian home region of Azraga was hit with a "dzud," a devastatingly harsh winter that killed as much as 40 percent of many families' livestock. For a nomadic family, the loss of livestock translates into a direct loss of household income. And that's not even the worst-case scenario --Erdenemunkh had a neighbor who lost all but one of his 80 cows in the unrelenting cold.

Herders distinguish among three different types of dzud. This year's was considered a "glass dzud," where the ground froze solid under a thick layer of snow, prohibiting animals from grazing. With temperatures reaching -40 to -60 degrees Fahrenheit throughout January, it was the coldest winter in local memory, and animals both froze and starved to death. Most families in Azraga said this year was even worse for them than the notorious dzud of 2010, in which almost 8 million head of livestock, or 17 percentof the entire country's animals, died and the government of Mongolia declared disaster status.

The dzud of 2010 forced many nomads to give up herding altogether and move to the city for employment. Two years later, while many in Mongolia continue to recover from the 2010 dzud, the trend of urbanization still continues, and at a rapid rate. Many herders now agree that pasture quality and the harshness of recent winters are so bad that herding has become untenable.

"The pastures of Taragt used to support 170,000 livestock. Now it can only support 80,000," said Erdene, vice governor of the district of Taragt in Övörkhangai Province. Overgrazing and desertification have depleted the vegetation of the pasture lands, making it difficult for livestock to get the nourishment they need to survive the increasingly harsh winters. "It's getting worse," Erdenemunkh said. "It's discouraging to imagine continuing being a herder." Erdenemunkh explained that he quit school at 13 to start herding. Now he said he realizes how important education is. As a herder without any other skills or education, one bad winter can take your entire life away from you, he said. Thus, his kids will go to school, he said firmly.

As I traveled with the Vanishing Cultures Project through Central Mongolia and talked to numerous families, we heard the same thing over and over: "My wife and I cannot move to the city because we don't have any education or skills, but we're sending our children to school. They won't be herders." If what these herders say holds true, this means that the ancient nomadic culture of Mongolia will be seriously reduced within a generation's time. Perhaps such change is necessary -- humanity has and always will evolve and adapt to new eras, technologies, and philosophies. But history and tradition have important roles to play even in the modern world, and it would be a shame to simply replace millennia-old wisdom with modern attitudes. My work with the Vanishing Cultures Project is steeped in the belief that the correct way forward is to hold onto the cultural elements that most touch, define, and inspire us when navigating times of development or great change. I hope that in Mongolia's rapid transition away from nomadic life, large-scale or government-backed efforts will be made to safeguard the arts, skills, traditions, and lore that thrived on the steppes since ancient times.

To find out more about Mongolian art and culture, or to contribute to Mongolian nomadic cultural programs, check out these organizations and websites:

PHOTO GALLERY
Last of the Nomads
Download
Calling all HuffPost superfans!
Sign up for membership to become a founding member and help shape HuffPost's next chapter
Join HuffPost 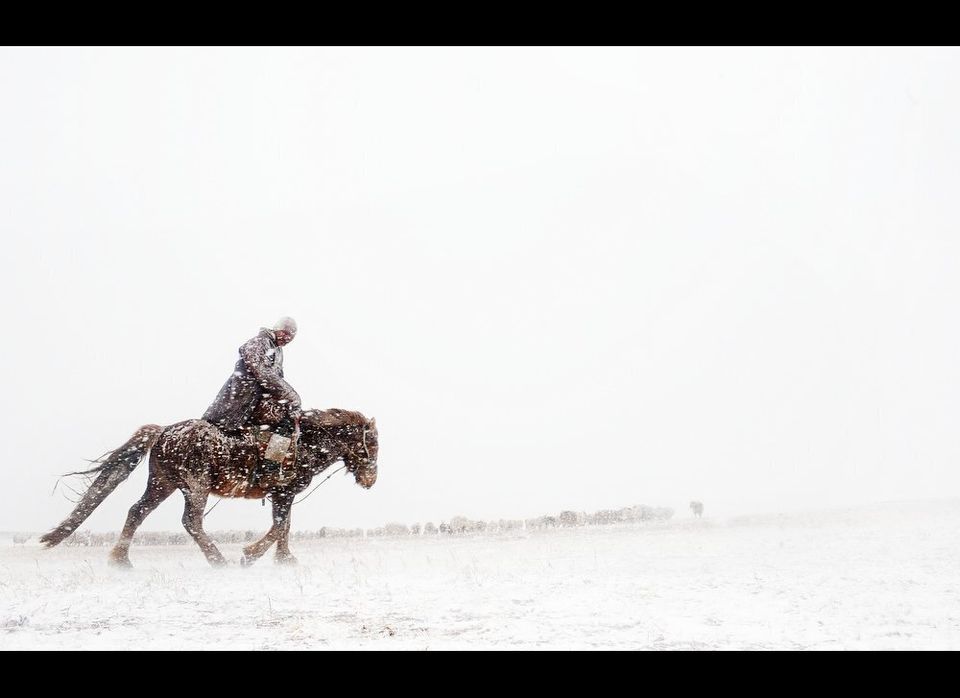 1 / 3
Herding in a Snowstorm
A herder rides out into a late-winter snow storm to herd his sheep and goats.