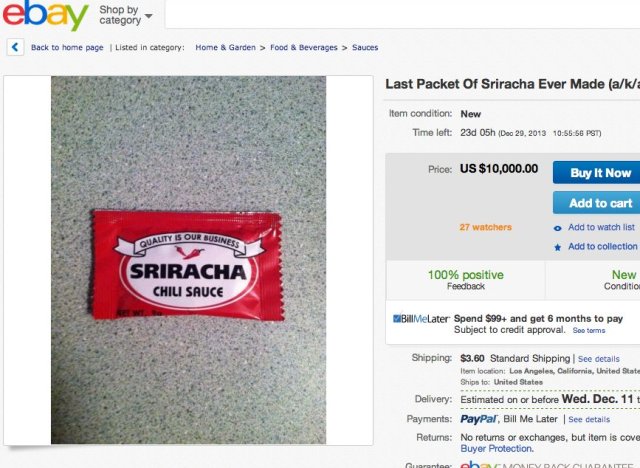 Talk about a hot commodity: A packet billed as the "last packet of Sriracha ever made" is on sale on eBay for only $10,000. Shockingly, no one has bitten yet.

Fans of the popular hot sauce are panicking after a judge in Los Angeles ruled that the the Sriracha factory must be partially shut down due to "offensive" odors. Local residents reported trouble breathing from the factory's stench.

Huy Fong Foods, the company that makes the sauce, did not respond to a request for comment. However, Sriracha has previously explained that it's finished this season's round of pepper grinding -- the alleged source of the odors and the aspect of production that's shuttered. If that's so, then Sriracha production seems safe for now.

Nevertheless, some bottles of the beloved hot sauce, which usually only cost a few dollars each, have been listed on eBay for an inflated $20 to 50 since news of a potential shortage went viral. And our man "larryhagman," the eBay seller asking for $10,000, is embracing the panic in the most ridiculous manner possible:

"I know you're saying, '$10,000 for a pack of Sriracha? That's crazy!' Well guess what, when the zombie apocalypse arrives and you're out of Sriracha, which are you gonna miss more -- Sriracha for that rodent you just cooked, or the $10,000?" 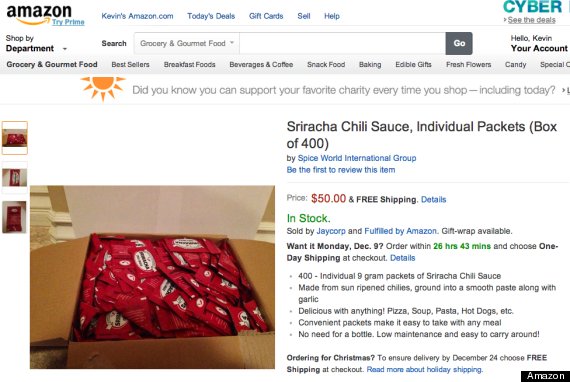 27 Ways To Cook With Sriracha