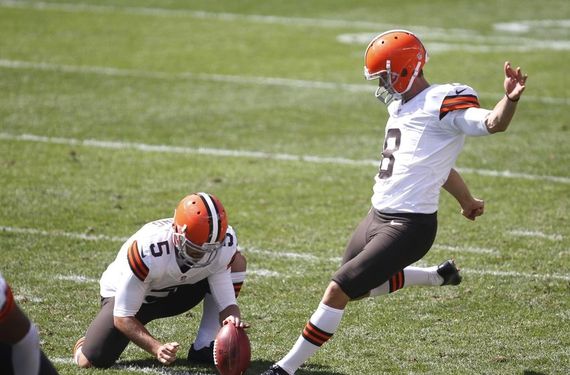 The clock was almost out. The Ravens and The Browns were locked in a battle of the most winless teams on a Prime Time Monday Night Football broadcast that even ESPN snubbed. The score was tied at 27-27. Browns were within field goal range at 51-yards out. It was their turn for the win. Just one solid kick and this game would be in the books.

Then the unthinkable happened. Browns kicker Travis Coons went to kick the ball but it was blocked by Brent Urban. The live ball was then scooped up by the Ravens Will Hill, who proceeded to rush it down the lane and score a game-winning, last-second score for the Ravens to put this unreachable game in the books as a win.

"It was almost a game of redemption," said John Harbaugh, head coach of the Ravens. "Will Hill didn't do a very good job in coverage. He got fooled a little bit and gave up a touchdown pass. He comes back, picks it up and runs it in. All the guys on the field-goal-block team set the wall down the sideline. It was a thing of beauty."

Without leader Joe Flacco - who's sidelined with a season-ending injury - the birds managed to pull this one off and go to 4-7 on the year. Not that this matters for them this season, seeing as they sit in third place in the AFC North, stuck behind the Steelers and the nearly unstoppable Bengals.

"It's a tough one to wrap your brain around," Browns coach Mike Pettine said. "It's frustrating. The guys battled back from some deficits. We didn't finish it."

A back and forth battle led to the game being tied late in the fourth when Austin Davis relieved Josh McCown, who went down with an injured shoulder, and scored on an impressive 42-yard TD pass to Travis Benjamin.

After holding the Ravens to a three-and-out, the Browns had one more shot. Coons lined up and readied to put away the game-winning kick. But as the gods of fate would have it, such was not the plan for the Browns this time around.

"It felt really good coming off my foot," Coons said. "I was really surprised. I don't know if it was me. As soon as it comes off your foot and you hear another thud, that's not a good thing."

If these teams both weren't in the middle of such lousy seasons, and if this game-ending play was to occur during a more satiable marquee lineup, it'd notable go down as one of the most amazing blocked field goals in history.