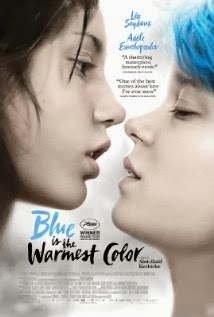 Abdellatif Kechiche's Blue is the Warmest Color begins with a discussion of Marivaux's The Virtuous Orphan: Or, The Life of Marianne in a high school classroom in Lille. The very sizing up and choosing of potential romantic partners constitutes the nature of the discussion, which eventually brings up the question of free will or predestination. Of course this is the foreshadowing for the seemingly fortuitous initial encounter between Emma (Lea Seydoux), an artist and art student and Adele (Adele Exarchopoulos), a high school student. When we first spot Adele in a series of crosscuts, she seems to move around like a random atom, her progress in life only subject to her preternatural appetites, which include boys, girls and food. However, the conflict between free will and determinism quickly gives way to a debate over appetite versus taste--which can, when you think of it, be looked at as one refinement of the earlier question. As Adele's appetite for women drives her to Lea, the gourmand turns into a bit of a gourmet with Sartre's famous dichotomy between existence versus essence, the art of Schiele and Klimt and the films of Louise Brooks appearing as citations along the way. But is this haute cuisine, cuisine bourgeoise or merely fast food? The answer is that Blue is the Warmest Color is all three and that is what creates its daunting complexity. It's surprising that Camille Paglia didn't have a cameo, at least at one of the artist soirees since the eroticism of the sex between Lea and Emma dwarfs any heterosexual sex scene that has appeared in either porn or straight films. If Paglia's Sexual Personae: Art and Decadence from Nerfertiti to Emily Dickinson argued that male sexuality played a poor second fiddle to the power of the feminine drive, then Kechiche's movie is the graphic proof of her point. And yet this might be called the fast food element of the movie to the extent that all passion is predicated on impossibility and Kechiche's lovers fall into a long line of tragic victims of sensibility including Tristan and Isolde, Romeo and Juliet, Anna Karenina and Emma Bovary (the eponymous Emma after whom Kechine's character is named). Amongst the many references in the film one can't help but think of Last Tango in Paris.. Exarchopoulos has the late Maria Schneider's lips and hair style (with a bang covering her face throughout ) and like the character Schneider played in Last Tango, Adele is a child in woman's form. Significantly, and to the chagrin of her older more sophisticated lover, who is constantly trying to Pygmalianize her (class and class consciousness are yet one more level of concern in Kechiche's ornate tapestry), by getting her to change her career objective to something more creative, Adele has immersed herself the field of early childhood education. Blue is the Warmest Color won the Palm D'Or and only the French could have produced such an erotic film that also is an extended philosophical discussion out of the pages of Pascal and Montaigne. The film could have been shot at the Ecole Normale Superieur. Rather than Blue is the Warmest Color the film might better titled Last Tango in Lille. But make no mistake, the delicate and complex layering and sensations of this particular confection definitely qualifies the final product as haute cuisine. The palette of emotions Exarchopolous is able to draw upon is extraordinary. Her cheek moves involuntarily in a nervous tic as she begins to fall apart. One should also note that besides Lea Seydoux's character being named Emma, the movie takes place in the north of France which is Bovary country.

{This was originally post to The Screaming Pope, Francis Levy's blog of rants and reactions to contemporary politics, art and culture}