A few years ago, photographer David Michalek filmed 43 dancers and choreographers with a high-definition camera. He projected the clips on giant screens at Lincoln Center. Each five-second segment was played in extreme slow motion, stretched out over 10 minutes. Collectively, they glorified the bewitching, bewildering intricacy of the dancing body.

Last Touch First is a revision of Kylián's Last Touch, created in 2001 for Nederlands Dans Theater III. Set in an oppressive Victorian parlor, it features six Chekhovian characters -- all thwarted, all desperate, all miserable -- who move as if suspended in honey, accompanied by Dirk Haubrich's nervous piano mutterings and metallic shrieks. Schumacher's revision (Kylián and dancer Sabine Kupferberg assisted) is primarily an extension. Last Touch is about 20 minutes long; Last Touch First runs for a deliberately excruciating hour. 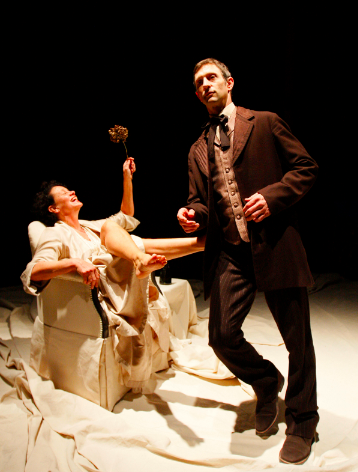 Slow motion is always weirdly fascinating, and seeing performers negotiate the physical challenges of near-stillness is doubly so. It's also surprisingly difficult to register everything happening onstage in Last Touch First. As you watch one pair of dancers, you're aware that another duo is also moving, but you can't perceive their slight gestures in your peripheral vision. When you shift your focus, the second group seems to have magically transformed.

Each of Last Touch First's characters emerges gradually: the tippler drinking a little too deeply from her wineglass, the innocent man flirting with the gentle bookworm, the distant, preoccupied matron. But just as we figure out who these people are, they begin to disintegrate.

Slow motion caricatures the everyday. It makes a happy laugh look maniacal, an embrace look like an attack. For a while that works to the dance's advantage, betraying the cracks in its brittle facade. But when things get truly frightening -- the young man crumples pages from the girl's book and stuffs them in her mouth, the tippler attempts to strangle her beau -- we enter a strange funhouse territory. Some of the more harrowing phrases are, smartly, accelerated. But that doesn't stop the work from crawling, ever so slowly, toward melodrama.

Schumacher, who has danced for Twyla Tharp and Eliot Feld (but not, interestingly, Kylián), has a precious asset in his cast. They're all, with the exception of Schumacher himself, alumni of Nederlands Dans Theater and/or NDT III; they're all senior dancers. And without works like Last Touch First, they would all be put out to pasture. It's tragic to imagine a dance world without a place for Sabine Kupferberg's sublimely eloquent body. Whatever Last Touch First's flaws, thank goodness it allows Kupferberg to celebrate her 61st birthday onstage, where she will always belong.

A former dancer and choreographer, Margaret Fuhrer is an associate editor at "Dance Spirit" and "Pointe" magazines.