John Oliver turns 38 on Thursday, and so to celebrate, we are rounding up a few things you didn't know about "Last Week Tonight."

The Huffington Post reached out to David Kaye, the show's announcer, and comedian Adam Newman, who has played many of the various costumed characters such as the space gecko and the sexy edamame, to see how they feel about being on the show and how things have come together.

As Newman joked, "I will talk about being the space gecko as long as you want," and we certainly held him to that.

This is something you won't be able to get out of your head while watching the show from now on. Kaye lives in California and, therefore, has to record his parts for the taping very early on Saturday or even Sunday mornings. As he has a studio not too far from his bedroom, he just throws on a robe, shuffles across the courtyard and records "half awake."

"I'm Nick Nolte, I got the robe on and the neck hair. It's a good thing there's no cameras," said Kaye. 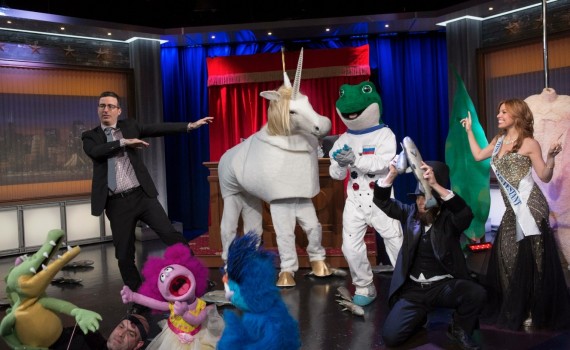 Newman explained that a high level of choreography goes into these bits and there are rehearsals the day before and sometimes the day of, as well. Things are blocked out and general movements are planned to make the space gecko as funny as it can be for the live taping.

For example, the Season 1 finale took a considerable amount of time to rehearse. Newman told HuffPost that when "they had the gecko, the edamame, the chicken, the breakdancing Abraham Lincoln, all the dog Supreme Court justices," the actors had to rehearse for a full day before the taping because "there were so many moving parts."

Oliver was at these rehearsals, as well, "laughing the entire time," Newman said. "I think he really enjoys and gets a kick out of his own show which is great, so it's like a really fun thing."

Apparently, the show also specifically seeks out comedians to fill these costumed roles rather than typical extra actors, since they "have a bit better timing and improve ability while on the set."

Quite a bit goes into making sure a space gecko pours out a 40 just right.

Newman told HuffPost that "there was a whole rehearsal that day," which lasted a few hours to get the 40 scene just right.

We blocked it out. We went out there. We practiced. The cap was on for all the rehearsals. So the actual first and only pouring was live. But you know, we went out there and we did, maybe, two or three rehearsals and they're all a little different.

There was alternate versions tested out where Oliver would toast the space gecko or dance with him or hug him until the perfect 40 pour was settled upon. 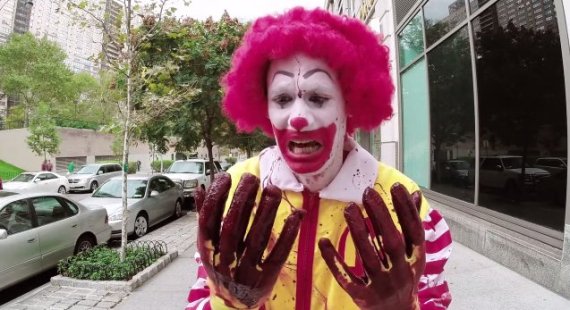 For a segment on a McDonald's ad campaign, "Last Week Tonight" produced a parody commercial that, at one point, involved Newman dressed as Ronald McDonald increasingly freaking out while asking McDonald's questions about his true identity. The bit involves blood and a serial killer plotline, so probably not the best thing for small children to be watching.

But while shooting, onlookers were accidentally tricked into believing this was a taping of a real McDonald's commercial and therefore hung around to watch the "Last Week Tonight" crew. Newman said that at first he was just a "regular Ronald McDonald talking into that board that you see in the McDonald's commercial" and so kids and parents surrounded the set. Then it started to devolve into moments where Newman would swear "every now and again" while improvising lines, and so the huddle group started thinking, "Oh, that's kind of weird."

Of course, the fake blood was what put the parents over the edge and they realized they should probably keep walking. "When they covered me in blood, I was screaming horrible things on the street and swearing a lot and it looked horrifying," Newman said. "A lot of parents were shuffling their children off pretty quickly after that."

What makes Kaye's voiceovers so funny is that he maintains a straight announcer voice even while saying absolutely ridiculous things, and occasionally swearing. Apparently, keeping that voice without bursting out laughing is just as hard as you'd expect.

"Oh yeah, there have been many times where I have to stop, because you get the giggles," said Kaye.

One moment in particular got him: "It was a Mitch McConnell bit we did and it was about his penis or something [laughs] and I couldn't continue. Every time I tried to start up again, it would be, 'And Mitch McCon... [laughs].'" This laughing steak went on for about five minutes, which Kaye said has happened "on numerous occasions."

The very first job he got for the show also cracked Kaye up:

I remember halfway through I started to laugh and I had to stop for almost five minutes because I couldn't continue. It was just funny. And I said, "Ahhh, so this is going to be fun." So we watched the first show and I just thought, "This show is going to be hot."

Neither Kaye nor Newman are involved with the show every single week, but because of their admiration for it, they certainly would love to be. "If I don't get called to do 'Last Week' I get disappointed, because I want to be part of it and read funny stuff," said Kaye, who considers the writers to be completely "brilliant." "To be able to yell and scream and then hear myself on the air. Saying fuck and shit, it's great. It's cathartic, and something I never thought I'd be able to do."

Newman told HuffPost that he recently got a call to block off some time to be on the show in May and didn't even ask what his role would be, as he's confident that whatever they come up with will be great. Relaying his favorite memory, Newman talked about the Season 1 finale and how proud he was that things came together.

I'm sitting there in an edamame costume, there's another guy wearing the gecko costume. There's breakdancing Abraham Lincoln just kind of having his quiet moment before he goes out there. There's dog handlers, there's people with puppets. It's just this crazy fantasy world. All these crazy things are happening around you and then you run out on stage. I was in an edamame costume almost getting choked up.

Newman continued, "I know I have a very small role in this whole thing, but the whole audience is standing up, there's complete chaos ... it just feels like everyone accomplished something great."