Last week, the world was drawn together, into a single consciousness, to experience a collective moment of transcendence that culminated in a Revelation of Ultimate Truth delivered by the True Prophet of our Age. And we have the Federal Communications Commission to thank.

Thursday morning, the FCC voted 3-2 to approve net neutrality. Before the vote, members of the commission joined hands. Afterwards, FCC Chairman Tom Wheeler said the policy will ensure "that no one -- whether government or corporate -- should control free open access to the internet."

A few hours later, as if they had heard in Chairman Wheeler's words a clarion call, two llamas (or possibly a llama and an alpaca) escaped from their handlers and ran wild through the streets of Sun City, Arizona, chased by lasso-wielding Maricopa County Sheriff's officers and, overhead, television news helicopters. 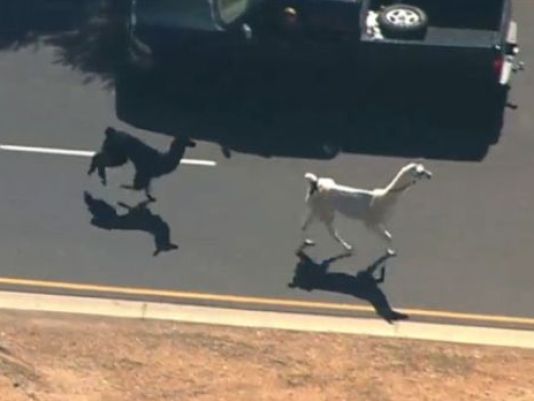 No one knows why the surreal spectacle of the llamas loping majestically down Sun City's paved streets and landscaped meridians captivated the internet. Perhaps it was the goofy echo of Thelma and Louise. The overhead camera angle seemed reminiscent of the O.J. Simpson white Ford Bronco chase. But we can't really know. This is just how the zeitgeist works. It cannot be defined or captured, except fleetingly, in the strains of poetry, or in events both absurd and beautiful -- a left shark forgetting his dance steps on a Super Bowl stage, for example, or a pair of llamas casually roaming the streets of a Phoenix suburb, both aware of and somehow oblivious to their halcyon moment of pure freedom.

Anyway. The llamas had drawn us together, and transported us to the edge of the surreal, for some larger purpose. But what? We remained in the inky darkness of still-unfolding events. A few hours later, a woman in Scotland posted a picture of a dress on Tumblr, captioned with a simple plea: "guys please help me - is this dress white and gold, or blue and black? Me and my friends can't agree and we are freaking the fuck out."

We all know what happened next. The world could not agree on the color of the dress. Some said it was white and gold, or perhaps white and yellow, others that it was purple and black, or perhaps blue and black. The dress seemed to change color -- to transform its very substance -- before the eyes of each individual viewer. Still, everyone looking at the dress thought the same things: "We're looking at the same dress! Why can't we see the same color?" and also, "What is the one true color of the dress?"

In fact, we had been brought, unwittingly, to the brink of a collective transcendence. The FCC had set the stage, the llamas had drawn us together and transported us beyond the mundane, and now the Random Dress Whose Color Could Not Be Definitively Stated was sparking a collective recognition of the limits of perception, the instability of reality -- the thin filament between us and the Sublime -- and the surprising extent to which dress colors can change depending on the light. We had all come together as one to join in--and also quibble over -- something larger than ourselves, something confounding and inexplicable.

New Yorker staff writer Nathan Heller summed up the meaning of the cultural moment. "This is our Woodstock, people," he tweeted.

Soon, a prophet emerged to lead us through the doors of perception standing open before us. Child genius Tavi Gevenson, fashion blogger and editor of Rookie Magazine, tweeted a link to a Rookie article from this summer explaining the qualia problem, an aspect of the phenomenon of perception that prevents us from having identical perceptions of the same colors. We all see our own blue, in other words. So fundamental is this gulf in perception that it prevents us from even knowing it exists. Not only can you never see the exact same "blue" as another person, you can never know you are not seeing it.

Then, Gavinson posted this follow-up tweet: "but u guys, isn't it sorta, idk, beautiful? tht we can't see the same things? or ever really connect? or love? & tht we all die alone? fuck"

Our generational moment of collective transcendence had arrived. The internet singularity was complete.

True, we might have preferred to have our internet singularity lead us to a collective realization of peace and love, instead of a despairing recognition of our inevitable alienation and the fact that we all die alone. But we don't always get the singularity we think we deserve. Even at Woodstock, everyone had to wake up the next morning and tromp home in the mud.

Still, I think we can draw an important lesson from this magical procession of events. It wasn't a coincidence that the day began with the FCC's vote on net neutrality. Indeed, without net neutrality, none of this could have happened. All of the wild, beautifully goofy llamas in the world couldn't draw a billion people together into a collective recognition of the Sublime with an internet built on lanes of varying speed tied to service fees.

It really shows you what enlightened politics can achieve. And who knows? Maybe, like Obamacare, net neutrality will be even more beneficial than its proponents claim. One thing is clear. If last Thursday's events are any indication, it's going to be amazing.