In November of 2006, when no-knead bread was sweeping the internet cooking world, I was living in a dorm room. I had no oven, no place to keep flour, and no covered pyrex or cast iron pot for baking. Even if I'd heard about the phenomenon, which I didn't, I wouldn't have been able to do much to hoist myself onto the rapidly expanding bandwagon.

In my first apartment, I played around a bit with baking bread. I made whole wheat and oatmeal loaves from my mom's old Laurel's Kitchen bread book. Though the scent of the yeasty doughs rising and baking subsumed the tiny place in remarkable smells, I found I didn't always get through a whole loaf, and it all seemed more work than it was worth--especially sweeping up the endless sprays of flour from the apartment that were a result of doing my kneading at the coffee table.

When I came back to the no-knead recipe, it was making a slight resurgence on the internet due to the publication of a book by Jim Lahey, the baker behind it all. I'd also been going through a toast-for-breakfast phase, and I wanted badly to make this bread all fall. But I didn't have the right pot--you need a heavy pot with a lid. I didn't own one. On Christmas, I became the proud owner of two Le Creuset pots (thanks, mom), and I got to work right away.

I've made seven loaves since then, and it's just not getting old. I like to start the loaves on Friday or Saturday afternoon, then let them rise all night. In the morning, I get up early and shape and flour the dough, then doze off or do errands for an hour and a half until it's time to preheat the oven. When the bread finally comes out, I load the table with condiments and knives, and then Alex and I attack it. He dips bread in peanut butter and a little bit of jelly; I go for salted butter and sometimes thinly sliced Jarlsberg. I'm slightly embarrassed to admit we tend to get through half a loaf. Then I eat more modest slices, toasted, the rest of the week for breakfast. It's a system I think I could get used to.

For now, I'll just echo what every food blogger of the past four years has been saying: make this bread. It can easily be part of your routine, which is good, because you'll easily become addicted to it. 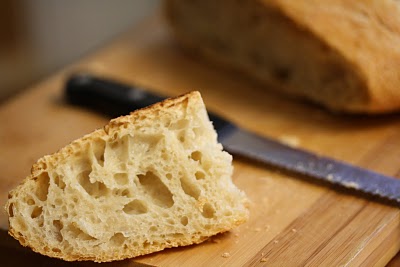 In terms of experiments and tweaks: first and foremost, I abandoned the recipe's original "instant yeast" the moment I realized it wasn't what was in packets I had in my fridge. Instead, I mix active dry yeast with water and let it bubble before pouring over the flour. Right now I use 3/4 teaspoon, but I think I could play with using even less. I also usually have a bit more than the 12-18 hours prescribed for rising, so I keep the bread in the fridge for the last 6 or so hours of the rise (while I'm sleeping). So far, this hasn't seemed to have much of an impact--it just slows down the rising. My most recent loaf featured 1 cup of stone-ground whole wheat flour to 2 cups of white, and it was great. I'll definitely be playing around with various flours in the coming loaves.

Combine about 1/2 cup of water and the yeast. Stir to combine. Set aside for about 10 minutes, until the yeast bubbles. This activates the yeast and confirms that it's alive. Add the rest of the water.

In a medium bowl, combine the flour and the salts. Pour the yeast-water over the flour, then use a rubber spatula to form a soft, ugly dough. Cover with plastic wrap and leave to rise for about 12 hours, until there are bubbles across the top.

If you're not ready to bake, place the bowl in the fridge. Otherwise, proceed with the recipe.

Dump the dough out onto a floured surface. Let it rest for 15 minutes. Then, using as little flour as possible, shape the dough into a ball by folding the ends in. Turn onto a cornmeal-dusted non-terrycloth dishtowel, seam side down. Dust with more cornmeal, then cover with another towel. Leave for two hours.

When there's a half hour left to go of this rise, preheat the oven to 450 degrees and put a covered, heavy pot in the oven.( I use my 5.5 quart Le Creuset to achieve a well-proportioned loaf.) When the dough is ready, carefully take the pot out of the oven. Dump the dough, seam side up, into the pot and shake it to spread evenly. Cover and bake for 20-30 minutes. Uncover and bake for another 15-30 minutes, until deeply brown and crusty. Let the bread rest as long as you can before slicing into it.

I store my bread in an airtight baggie, even though this makes the crust soft. To "re-crust" a whole loaf, you can dab it all over with water and bake for about 10 minutes in a 450 degrees oven. If you're going slice by slice, just toast to rectify the crust.