Some Tennessee lawmakers and parents are in a tizzy because they believe seventh-graders are spending too much time learning about Islam as part of social studies.

A Tennessee lawmaker leading the charge has spewed an all-too common refrain, saying the state's schools were leaning toward indoctrination because they emphasized learning about Islam more than about Christianity. The lawmaker last week upped the ante and proposed a bill prohibiting Tennessee public school courses from including "religious doctrine" until students are at least in 10th grade. What the lawmaker means by religious doctrine is fuzzy. But she's a part of a statewide movement of parents and groups taking aim at lessons on Islam. A Christian organization joined the fray by submitting a public records request to every school district in the state asking for curriculum that included Islam.

It would be easy for some people to brush this off as anti-Muslim rhetoric, given previous high-profile controversies in Tennessee like nasty opposition to the construction of a mosque in Murfreesboro. But this outcry over instruction about Islam is also brewing in Walton County, Georgia, in a suburban Atlanta school system where some parents objected to simply seeing Islam mentioned in seventh-graders' homework. And it has happened with variations on the theme in Wellesley, Mass., in suburban Boston; Wichita, Kansas; Tampa, Florida; and Lumberton, Texas. I reported on conflicts in those towns and cities as part of research for a book on schools' efforts to teach about the world's religions.

Teaching about religion, and not only Islam, has become an increasingly thorny topic for public schools.

In Wichita, in August 2013, a set of parents and a state lawmaker objected to an elementary school's bulletin board display because it said, "The Five Pillars of Islam." Opponents to the bulletin board, set up for fourth-graders studying the spread of Islam, questioned how the school could teach about the five pillars and exclude the sixth, which they claimed was jihad and a Muslim obligation to kill all infidels. Traditionally, Muslims refer to five pillars or five basic obligations of their faith, including daily prayers and fasting on Ramadan. Jihad is not on that list. 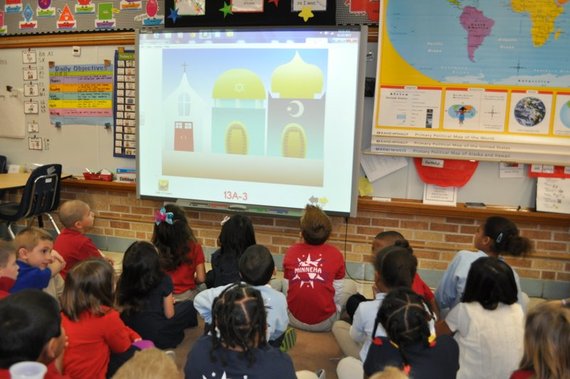 Children at the same Wichita school start receiving basic instruction on the world's religions in first grade as part of the Core Knowledge curriculum founded by education researcher E.D. Hirsch Jr. Some parents, though, told me they were concerned about their children learning about any religion at such a young age. They at least wanted to know when the lessons would occur. Schools around the country have been using Core Knowledge lessons for at least two decades, but it wasn't until the 2012-13 school year that the Core Knowledge Foundation created take-home letters about the units on religions. New York City at the time was just starting to use Core Knowledge materials in many elementary schools. The foundation, which oversees the curriculum, offered the letters for teachers to send home because it was aware of sensitivity over instruction about religion. The organization also urged teachers to alert principals that the early civilizations first-grade unit includes lessons on Christianity, Judaism and Islam. "You don't want anyone to come back and say, 'Whoops,' " Linda Bevilacqua, the foundation's president, told me in an interview.

The Wichita school that had the controversy wasn't using the take-home letters. After the brouhaha, teachers began doing more to inform parents via newsletters and parent-teacher conferences. I lean toward giving parents a thorough heads up, and the Core Knowledge Foundation letter is a good model. The letter describes the curriculum's goal to give students the vocabulary and context so they can understand "the many ways that the world religions have influenced ideas and events in history." It also emphasizes that teachers know to avoid making opinions about different faiths in the classroom. "It is important to understand that the religions your child will hear about in first grade - Judaism, Christianity, and Islam - are not being singled out or presented in any way that suggests the merits or correctness of specific religious beliefs," the letter notes.

Wellesley Middle School in a Boston suburb faced uproar in 2010 after taking students on a field trip to a mosque, and a parent chaperone secretly filmed the event. A male worshipper invited five boys up to join the line of worshippers. The boys mimicked what they saw, and a subsequent video came out accusing the school system of trying to indoctrinate its sixth-graders. The school system said it did err. Students should have observed, not participated, in any religious ritual. Wellesley's detractors, though, mainly came from outside the school system. Parents overwhelmingly have stood by the school's sixth-grade course on global beliefs, required for all sixth-graders since 2000.

Wellesley for years has provided letters for sixth-grade teachers to send home before the course begins. Adam Blumer, the social studies chair, crafted the letter because he knew instruction about religion could spark issues even in a liberal town in one of the most secular states. He addressed the question, "Why teach about religion at all?" and listed several reasons, including religion's role in culture and its attempt to explain the inexplicable. He also mentioned the school system's goal to teach students respect for human differences.

Undoubtedly, given the post-911 times we live in, some backlash may occur over lessons on Islam no matter what schools do. But educators can be proactive. Rather than blame ill-informed opponents who wrongly think Christianity gets shoved aside in courses, schools should examine how well they are informing parents and the public at large about lessons on religion. Teachers could just cross their fingers and continue with lesson plans or they could work harder to let parents know what's coming. Don't assume parents have taken the time to scrutinize curriculum plans posted online or that they have memorized state standards.

Yes, most states for more than a decade have required teaching about world religions since the 1990s and early 2000s. A Tennessee state education official, in fact, tried to allay concerns by noting that state standards require learning about several religions beginning in sixth grade.

But many parents don't know this until they see their children's homework. In some cases, parents know but cannot comprehend why such lessons are taught. Educate them, and educate lawmakers, too.