Our model projects that Obama will win all states won by John Kerry in 2004, in addition to Iowa, New Mexico, Colorado, Ohio, Virginia, Nevada, Florida and North Carolina, while narrowly losing Missouri and Indiana. These states total 353 electoral votes. Our official projection, which looks at these outcomes probabilistically -- for instance, assigns North Carolina's 15 electoral votes to Obama 59 percent of the time -- comes up with an incrementally more conservative projection of 348.6 electoral votes.

New national polls on the last day of the race:

Nate Silver at FiveThirtyEight.com writes of the latest presidential polls:

Barack Obama's position has become somewhat stronger since our update this afternoon. We now have him with a 5.8 point lead in the national popular vote, and winning the election 96.3 percent of the time. Earlier today, those figures were 5.4 and 93.7, respectively.

I continue to find a hair's worth of tightening on balance in the state-by-state polls -- even as Obama's position in the national trackers seems to be roughly as strong as it has ever been. This, ironically, is the exact reverse of the position we saw earlier in the week, when the national polls seemed to be tightening even as the state polls weren't.

However, Obama's win percentage has ticked upward again for a couple of reasons. Firstly, he's gotten some relatively good numbers out of Pennsylvania since our last update, with PPP and Zogby giving him leads of 8 and 14 points, respectively, and Rasmussen showing his lead expanding to 6 points after having been at 4 before. (The Zogby poll is probably an outlier, but may serve to balance out outliers like Strategic Vision on the other side).

Secondly, McCain's clock has simply run out. While there is arguable evidence of a small tightening, there is no evidence of a dramatic tightening of the sort he would need to make Tuesday night interesting.

A CBS News survey shows Obama up by 8:

With two days left until the presidential election, Barack Obama continues to lead John McCain by 13 points among likely voters, 54 percent to 41 percent, a new CBS News poll finds. The margin in the new poll, released Sunday, is identical to that in a CBS News poll released Saturday.

As the number of undecided voters has dwindled, so has the number that says their minds can still change. More than nine in 10 of each candidate's voters now say they have made up their minds about who to vote for and are not likely to change. Just seven percent of Obama voters and 8 percent of McCain voters say they still might change their minds.

And USA Today has Obama leading by 11:

With less than two days to go before polls open, the contenders' support is estimated to be:

Those numbers, released this hour, are based on national surveys of 2,472 likely voters. The interviews were conducted by telephone on Friday, Saturday and today. The margin of error on each figure is +/- 2 percentage points.

Gallup says the group it surveyed is mostly made up of voters who fit its "traditional" model of those likely to show up at the polls. Also among the 2,472 are some who have already voted -- including first-timers.

And here are the national trends, via Pollster.com:

The latest polling averages in the key Senate races, from RealClearPolitics: 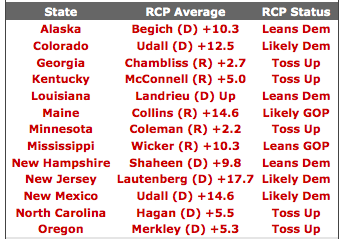 Below, the latest presidential polling averages from Pollster.com.