Shell Oil's string of failures in its Arctic Ocean drilling attempts continued into the New Year. One of the company's drill rigs ran aground near Alaska's Kodiak Island with 150,000 gallons of diesel fuel and other petroleum products onboard. In the face of a winter storm, all four of its tow vessel's engines failed. Then the tow line failed, and repeated efforts to reattach lines and tow the rig clear of danger failed, as well.

One storm thwarted Shell's plans to haul its rig to Seattle for maintenance. Yet the North is a region of storms. It is home to churning seas, punishing winds, frigid temperatures and months of prolonged darkness. The oil giant's failure to prepare for and cope with plausible weather conditions and the resulting threats to human life and the environment make it vividly clear: Shell has no business trying to drill in the Arctic Ocean. 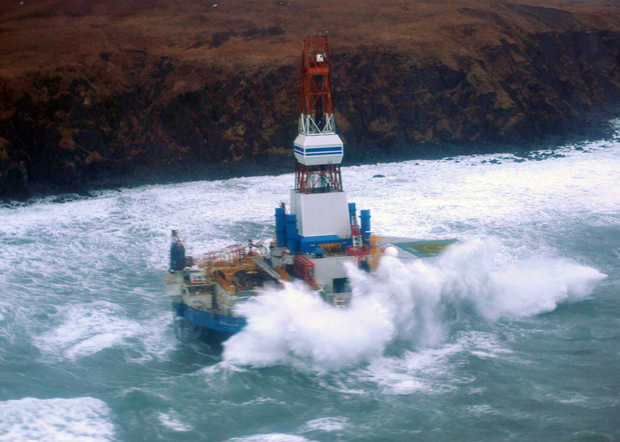 The dangers don't end in the Arctic. This drill rig debacle occurred 1,000 miles from Shell's drill site. The challenges and risks of Arctic drilling extend through the entire 2,000-mile delivery route to Seattle shipyards. And they leave countless coastal communities and marine ecosystems vulnerable to accidents like this one in Kodiak.

Shell has poured billions of dollars into offshore Arctic drilling, but no matter how much it spends, it cannot make the effort anything but a terrifying gamble. And if Shell, the most profitable company on Earth, can't buy its way to safety in Alaska, nobody can.

The grounding of Shell's drilling rig is not an isolated incident. It is part of a larger pattern in which Shell has proven no match for the elements. NRDC and our partners are calling for an immediate suspension to drilling activities in the Arctic Ocean based on this record of failure.

In July, one of Shell's drill ships slipped anchor and nearly ran aground in the Aleutian Islands on its way to a drill site in the Chukchi Sea. That same month, Shell conceded that it would not, as the government understood, collect 90 percent of any oil spill, but only "encounter" that much of it.

Through August, Shell had to keep its spill response barge, the Arctic Challenger, in Bellingham, Washington because it was plagued with so many problems. The barge is a linchpin in Shell's emergency plan, designed to be stationed between Shell's two drilling sites always at the ready. Yet the Coast Guard wouldn't certify it as seaworthy until the company dealt with 400 issues, including wiring and other safety shortcomings.

Then, when Shell started preliminary drilling without the spill response barge, within 24 hours its rig the Noble Discoverer had to flee from a 30-mile long iceberg that bore down on the drill site.

In September, Shell's containment dome -- used to capture oil in the event of spill -- was "crushed like a beer can" during pre-deployment testing. If this critical piece of spill response equipment couldn't function in the mild environs of the Bellingham harbor, imagine what could happen in the rough seas of the Arctic.

Shell's subsequent retreat from the Arctic was marred by punishing weather and problems evacuating drilling crews, disconnecting cables to the seabed, and refueling. Then the Coast Guard detained the Noble Discoverer for safety and pollution violations, after it limped into harbor with propulsion difficulties on its way south.

These are just some of the failures Shell has created as it tries to open our Arctic Ocean to oil development. The region can't afford any more of these kinds of mishaps. It's time to stop endangering the world's last wild ocean -- and all the communities and marine life it supports. This video, narrated by Robert Redford, reveals some of the other wonders put at risk by Shell's Arctic drilling plans:

We must not sacrifice one of our remaining untamed places in reckless pursuit of oil. We know we have to leave oil in the ground or destructive climate change will become unstoppable. If not in the pristine and vulnerable Arctic Ocean, then where?

We don't need to endanger this wild region when we have better options. The new clean car standards issued in 2012 alone will double the fuel efficiency of America's car fleet and cut our need to import oil by one-third. We can power our economy without despoiling our wild places.