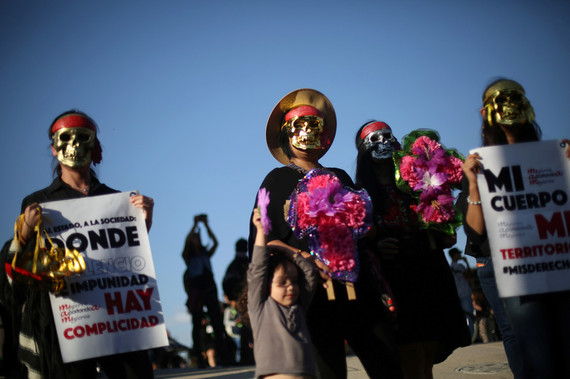 Women across Latin America took to the streets after a 16-year-old girl was raped and murdered in a coastal town of Argentina in October 2016. Edgard Garrido/Reuters

It's not been a particularly uplifting month to be a woman in Latin America, especially if you read the news.

On October 8 in Mar del Plata, Argentina, 16-year-old Lucía Pérez was abducted outside her school, drugged, and brutally gang raped. Young Lucía died when her heart stopped during the sadistic violence, which included penetration by objects.

In Mexico, three transgender women, Paola (last name unknown), Alessa Flores and Itzel Durán, were killed in different parts of the country. All were sex workers, and Flores and Durán were also trans rights activists. Just weeks before, Karen Rebeca Esquivel, 19, and Adriana Hernández Sánchez, 52, were found dead in suitcases in Naucalpan, State of Mexico, the deadliest place for women in the country. Both had been raped.

On October 18, a young pregnant woman was found dead on a Peruvian beach with signs of rape and the word puta (whore) written on her leg.

Horrifying but not isolated, these incidents reflect a regional reality. Several studies have shown that Latin America is the worst place in the world to be a woman.

A Gallup survey has shown that Latin American women feel they are not treated with respect and dignity. Dissatisfaction was highest in Colombia, Paraguay, El Salvador, Guatemala and Peru. The study attributes these feelings to widespread sexual violence and harassment against women and children, in combination with machista culture.

Hashtag movements for women, by women

The massive and simultaneous demonstrations were convened by the budding social movement #NiUnaMenos (#NotOneWomanLess). It was launched in August 2015 in Argentina as a response to an increasing number of feminicides. Peru, Chile, Uruguay and Mexico soon joined.

The international demonstrations have not only made the #MiercolesNegro (#BlackWednesday) and #ParoNacionalDeMujeres (#NationalWomensStrike) regional trending topics, they are also bringing light to the issue of violence across the region.

And in Mexico, 40,000 women were killed between 1985 and 2014. Here, the systemic killing of women since the mid-1980s has been so severe that it led to the coining of the word feminicide as a sociolegal term for the deliberate killing of women, and its codification as a serious crime.

Despite recent institutional and legal changes in the country, such as the establishment of a national institute for women's issues, a protocol for feminicide investigation, legalised abortion in Mexico City, and a bill for the protection of women from gender-based violence, the problem is getting worse. More than half of the 40,000 murders (23,000) occurred between 2000 and 2014.

Indeed, as I wrote in a previous article, it seems that Mexico's bloody war on cartels, in addition to increasing general homicide rates, has specifically made gender-based violence more common as well.

The term "femicide" was coined by American feminists Jill Radford, Diana E. Russell and Jane Caputi to mean the misogynistic murder of women by men. Femicide is the politics of killing women, the extreme-most action of a terror continuum against women.

Mexican feminists have modified this framework using our specific experience. Looking at the systemic killing of women in Ciudad Juarez in the 1990s, Julia Monárrez and Marcela Lagarde suggested the more accurate concept "feminicide", based on the notion that femicide is just a gender-specific word for homicide while feminicide refers to the killing of women based on their social or biological gender, and the characteristics attributed to that gender.

Feminicide is, then, the murder of women because of their sexuality, reproductive features, and social status or success. Building on the Juarez case, Monárrez also coined the phrase "systemic sexual feminicide" to refer to the cultural, political, legal, economic, religious and social context that allows sexual violence to be widespread and feminicide to be its culmination.

Systemic sexual feminicide in Latin America has shaped legal notions, which have now been used by international bodies such as the Inter-American Court of Human Rights. Recent murders in Argentina, Peru and Mexico demonstrate the importance of this concept to the region.

Likewise, American feminists would place this phenomenon on the continuum of sexual terrorism, but in Latin America the systematic and sexual nature of feminicide - painfully reflected in Lucía's case - are closer to an experience of what Italian philosopher Adriana Cavarero has called "horrorism".

In her book Horrorism, Cavarero claims that while the term "terrorism" focuses on the perpetrator's actions (the motivations of suicide bombers, for intance), it fails to describe the victim's horror and experience of being defenceless, which is the terrorist's aim.

The term "horrorism", she argues, better describes the experiences of massacre and genocide victims, because it focuses on the suffering and powerlessness of the victims.

Following Cavarero's ideas, we may assert that women's permanent fear of sexual violence, along with the feeling of powerlessness vis-a-vis their rapist, is closer to horror than terror. Rape followed by feminicide is sexual horrorism.

The horror continuum of sexual harassment

During the #PrimaveraVioleta demonstration against sexual violence in Mexico in April 2016, the trending topic #MiPrimerAcoso (#MyFirstHarrassment) showed that feminicide sits on a sexual violence continuum.

It begins as systematic and widespread sexual harassment at the hands of friends, relatives, neighbours, teachers, schoolmates and strangers, to girls as young as five years old. It happens on the bus, at school, while shopping, in the work place, at the park and in women's homes. It advances to sexual touching, violent abuse, and, as we've seen, murder.

#MiPrimerAcoso started as the response of the Brazilian feminist organisation Think Olga to people accusing girls of making up harassment stories. It was part of the group's 2013 campaign against the normalisation of abuse against women. With #MiPrimerAcoso, Think Olga called on women to share on Twitter and Facebook their stories of the first time they were sexually harassed.

The movement has spread across the Americas, from Argentina to Mexico and the United States (with #MyFirstAbuse), with thousands of posts showing that women and girls experience harassment from boys and men starting at six years old, and that this type of abuse is so systematic and widespread that women have learnt to live with it. They, we, see it as normal.

Well, not anymore. Latin American women are saying enough is enough, and #MiPrimerAcoso is just the beginning.