In a miniskirt and teetering heels, Lilia Luciano was once a staple of the Spanish-language news and entertainment shows like "Aquí y Ahora" and "Escándalo TV." But, last year, when Luciano left behind entertainment reporting in Spanish in favor of English language news on NBC, she also left behind a look which some say marks Spanish-language programming.

Luciano now appears on camera almost make-up free, with her waist-length wavy hair cropped short and straight. Her neckline, once plunging, now sits above her collar bone. And those saucer-sized earrings -- nowhere in sight.

Some Spanish-language newscasters dress more provocatively than their English-language counterparts, according to many in the business. Critics of these sexy reporteras say their clothing choices and heavy makeup stem from sexism in Latino culture, often referred to as machismo, and that a provocative appearance threatens their credibility as journalists. Others, however, say that the marriage of female sexuality and journalism is part of Latina culture, and that the combination can be empowering.

In the past year, a few Latina reporters have garnered criticism from American audiences, presumably unaccustomed to the high hemlines and low necklines of Spanish-language news.

This week, Mexican sports reporter Marisol González was singled out by American audiences. Fox News Latino blogger Mariela Dabbah, who also blogs for HuffPost LatinoVoices, criticized the reporter for her short, formfitting red dress which she wore to Super Bowl media day. González's appearance drew the attention of American audiences, according to Dabbah, who says she read comments like "Who was that ridiculous Latina chick in the red dress at the Super Bowl media day" on social media sites.

Last year, another Latina sports reporter, Ines Sainz from TV Azteca, was wrapped up in a controversy regarding inappropriate remarks made in the locker room by players on the Jets about Sainz's appearance. Sainz, a former Miss Universe contestant, calls herself the "hottest sports reporter in Mexico," according to MyFoxBoston.

Dabbah, author of a women's empowerment book called "Poder de Mujer" (Woman's Power), argued that, "the problem with ü bersexy reporters who pose in bikinis and wear skimpy clothing to do their jobs is that you can't take them seriously and they devalue the profession."

"Until the industry stops sanctioning looks over substance there will be limited opportunities for the thousands of brilliant female journalists who work hard to get in front of a camera," Dabbah writes, adding that, "playing to the sexy Latina stereotype contributes to smart Latinas not being taken as seriously as they should be."

But many who have seen both sides of the industry defend Latina newscasters, saying that both cultural differences and programming distinctions can contribute to more provocative clothing choices which are commonly misunderstood by non-Latino audiences.

"We mix news and entertainment, and when that happens, there's more of a license to be a little more feminine, and some may consider it sexy," Celeste said. "But never is it to a point that's considered vulgar."

"It's definitely a cultural thing," she added. "It's not a good or bad thing. It's just a different culture."

Celeste says that Spanish-language anchorwomen who appear on hard-news shows, without the entertainment aspect, dress very similarly to those on the English-language news networks.

This distinction may have contributed to the radical change in Luciano's look. "Escándalo TV," the Univision show on which Luciano once appeared, often veers towards entertainment over news. As Luciano's career transitioned into more investigative reporting on Spanish language television, her wardrobe and makeup so too transitioned.

"It's a misconception that women who are presenting news are wearing cleavage down to their belly button or anything like that," Celeste said. "It's quite the opposite."

Viviana Hurtado, an anchor who has worked for both ABC News in English and CNN en Español, says that pressure to be beautiful in the news industry has no language barrier.

"The pressure [to be beautiful] is not overt since that's illegal, but implicit: I always watched my weight, my complexion, my wardrobe, and was aware that my seniors were more likely to say after a live shot, you looked great, than great report," Hurtado wrote in an email to The Huffington Post.

In a study conducted in 2001 by researchers at the University of Florida, surveying 246 local-news anchors around the country, women anchors reported that the most pressing barrier in their way was "an overemphasis of their physical appearance." For male anchors, the same preoccupation did not even make the top five.

Hurtado says that "sexy" women can be found on Spanish-language television simply because "sex sells." But she suggests that this is not always a bad thing.

"Just because you win a Nobel Prize doesn't mean that you can't wear make up or get your hair done," she said in an email. "Or if you rock a skin-tight gown that you must have air between your ears. I love that women can be sexier or more feminine on Spanish-language news because that's how we are as women, as human beings, right?"

Latina columnist Mariela Dabbah, on the other hand, believes sexy clothing has its time and place, and that some Spanish-language anchorwomen are setting a bad example.

She says it's especially important for young Latinas to understand cultural differences if they want to advance in environments dominated by "Anglo culture."

"I wouldn't say they have to dress like nuns. There are other ways your sexiness and Latina taste can come through than a plunging neckline," Dabbah said.

But as anchorwoman Maria Celeste concludes, the answer to "what is too sexy?" is often subjective, and can break down along cultural lines.

"I don't make a judgement on the way a person dresses, I make a judgement based on the information, the delivery and the reporting that they're doing," Celeste said. "There's not a right way or a wrong way to dress."

See Luciano transition to news reporting in Spanish language in 2010.
And on NBC as a newsreporter in 2011:
Download
Calling all HuffPost superfans!
Sign up for membership to become a founding member and help shape HuffPost's next chapter
Join HuffPost 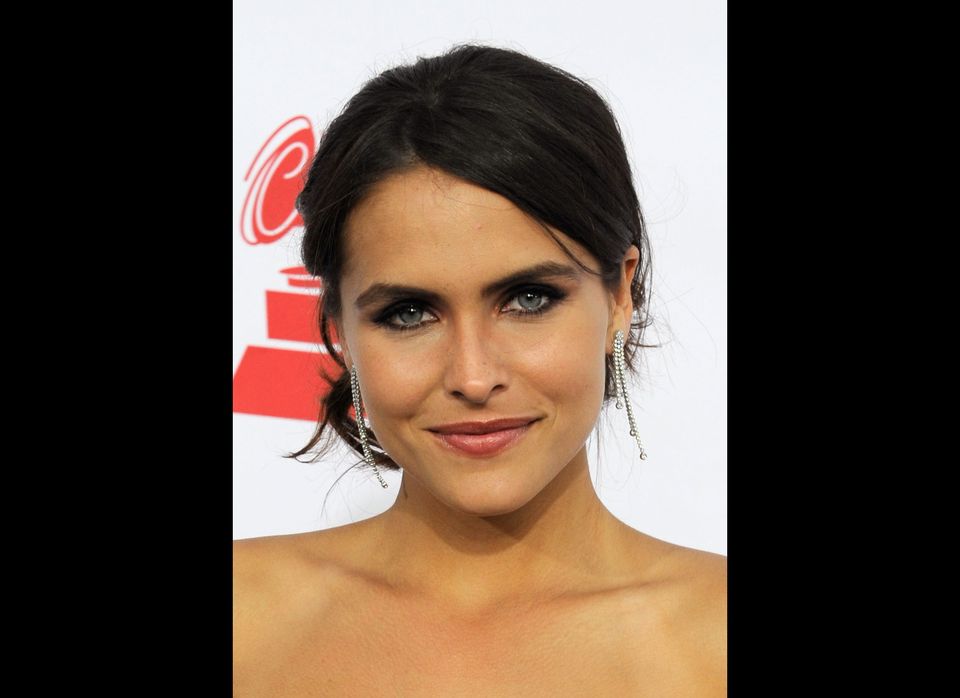