After last week's controversial debate surrounding a Boy Scout's patch, Latino Rebels reported that they met with the Troop 11 community in Milwaukee. Christine Nuemann Ortiz from Voces De La Frontera also attended the meeting and explained the image's history and it's meaning. By the end of the meeting the young man who tweeted accusing Latino Rebels of being pedophiles apologized for his actions.

To date, all the patches are off the troop's uniforms and a new a patch will be made, according to Latino Rebels.

PREVIOUSLY: A debate surrounding a Boy Scout patch surfaced the internet last week. The patch in question depicts the iconic "fleeing immigrants" image. It belongs to Troop 11, a 100-year-old scouts troop from Milwaukee, whose members are mainly Latino boys aged 10-18.

Latino Rebels received a response by assistant Scoutmaster Bradley Schultz, confirming that the patch was created by the troop about 10 years ago.

"We knew we wanted to be named 'Border', but we wanted an image to go with it," said Schultz in an email to Latino Rebels.

Each troop from the Boy Scouts of America is made up up of approximately 20-60 young men. Troops are divided intro patrols which have 5-9 boys.

"Each patrol gets to select its own patrol name. Patrol names can be just about anything the boys decide," according to an email statement by David Burke, Communications Specialist for the Boy Scouts of America. In this case, the patrol decided they would be called was "Border".

"Neither the United States Border Patrol or the Boy Scouts of America were involved in the naming of the patrol, or the production or distribution of the patch," concluded Burke.

In 2002, a member of the Troop 11 of Mexican descent visited Texas and saw the road sign image. He brought the idea back to Milwaukee and it was then agreed that the image would become the official patch for "Border Patrol", according to the Troop's statement.

The troop may now face serious consequence as the National Leadership of the Boy Scouts of America has deemed the patch "unauthorized".

The image will most likely be changing, according to assistant Scoutmaster Schultz. "We have been told by our council that if we don't change the NAME of the patrol the troop will be disbanded as a whole," Schultz added.

News of the possible demobilizing of the "Border Patrol" gave way to a semi-cyber warfare. The Boys Scout Troop created a Twitter account called @troop11eagle where they've issued responses to Latino Rebel's coverage of the story.

The group reiterates the fact that the controversial patch, although depicting the heated immigration topics, was chosen by the troop's groups members of Latino descent.

"They wanted this because they didn't wanna be associated with those that come to our country illegally. This has been part of our troop for almost 10 years," said Ryan Antczak, another assistant scoutmaster for Troop 11, to Latino Rebels.

"We are located in a very diverse area were the majority of Latin decent. No one has been offended till this day. We are not embarrassed by a branch of our government that serve this country proudly who put their lives on the line." 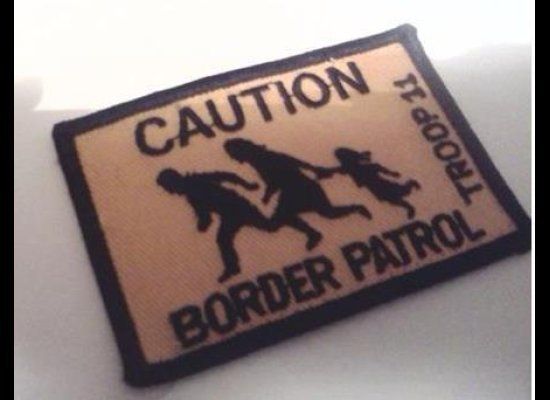