According to the latest data from our national tracking poll, Latino Decisions projects that between 13.1 million and 14.7 million Latinos will vote in 2016. This estimate represents a three percent to five percent increase over the 2012 Latino turnout rate which, coupled with the dramatic growth of the age-eligible Latino population, will yield between 1.9 million and 3.5 million additional Latinos voters in 2016 compared to the 11.2 million who voted four years ago.

Over the past seven weeks, the Latino Decisions weekly tracking poll has demonstrated heightened enthusiasm for voting in 2016 and record-high levels of support for Hillary Clinton. Each week, the released poll has captured a rolling cross-section of 500 bilingual interviews conducted nationwide with Latino registered voters and has found little fluctuation either with respect to likely turnout or the proportion of the Latino electorate anticipated to vote for each presidential candidate. From a statistical modeling perspective, this stability is good and suggests more confidence in our model estimates for Election Day.

Another record turnout for Latinos

As has been the case in recent elections, the increase in Latino turnout in 2016 will be driven largely by the rise in eligible voters and the success of registration efforts. Our own analysis is based on a probability sample of registered Latino voters, but the final numbers will depend on the degree to which registration efforts have succeeded in capitalizing on "Trump anxiety" in places such as Arizona, Florida, and Texas or whether--as some analysts have asserted--the Democratic Party may not have sufficiently taken advantage of a golden opportunity to mobilize eligible Latino voters.

Latinos have historically lagged behind other groups of eligible voters in their registration levels. Once registered, however, Latinos turn out to vote in high proportions, similar to non-Latinos. According to our LD Turnout Predict model, which we apply to survey response data in order to estimate likely turnout, we anticipate between 13.1 million and 14.7 million Latino voters will cast votes in this election. LD Turnout Predict estimates the relationship between key predictors of turnout (such as voter history and each respondents' own intention to vote) and the probability of casting a vote in a given contest according to previous surveys and validated votes. Using the same methodology in 2012, and examining official validated vote history in that year, our model estimated turnout about 3 percent to 5 percent lower than what we predict in 2016. 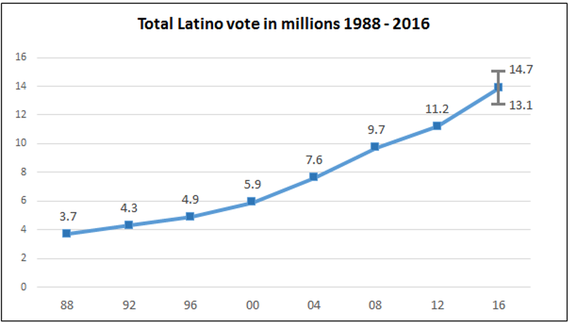 According to Pew Hispanic, 4 million additional Latinos have become eligible to vote since 2012, with totals estimated to reach 27.3 million. If this is correct, we should see at least 13.1 million and as many as 14.7 million Latinos casting votes this year, up from an estimated 11.2 million in 2012. Among registered voters, Latino turnout will be at least as high as in 2012, according to our model estimates, and likely 3-5 percent higher. Depending on how successful various Latino voter registration efforts have been--and early indications from states like Florida are promising -- it is possible that we may see numbers approaching 15 million Latino voters this election. Again, a lot depends on exactly how many Latinos are currently registered to vote for the November 2016 election. A simple linear projection would yield an estimate of about 16 million Latino registered voters this year, however this cycle has seen more Latino registration drives than ever before, leaving open the very real possibility of 17 million to 18 million Latino registered voters. Thus we have an estimated range of 13.1 million to 14.7 million Latino voters in 2016.

Our models of both vote choice and voter turnout utilize background information on sampled voters, survey responses, validated vote history, and post-stratification weighting. Model selection is based on a combination of social scientific knowledge of key predictors of voting behavior as well as machine learning feature selection techniques.

For each model, voters are grouped by "type" according to their profiles with respect to characteristics that make them more or less likely to turn out to vote and more or less likely to vote for particular candidates if they do vote. In the case of turnout, voter profiles take into account not only respondents' self-assessment of their likelihood of voting, but also background information such as validated vote history that may make their claims more or less credible.

Conditional probability of voting--given voter type--is estimated from validated turnout and post-election surveys in previous years, and estimation error due to model uncertainty and sampling uncertainty are incorporated via a widely accepted Bayesian simulation routine. So, for example, if we have interviewed few individuals of a particular profile in previous elections, assessment of their probability of particular voting behaviors will be less precisely estimated and this uncertainty will naturally lead to more widely varying possible outcomes in our simulations.

The same approach is used for estimating likely support for individual candidates, with the probability of voting for each candidate estimated conditional on stated intention, partisanship, and indicated enthusiasm for a candidate. As an example, it would be quite unusual to encounter a respondent who is registered as a Republican, claims to identify strongly as a Democrat, and yet says that they support the Green Party candidate in the current election. Our assessment of what such an individual is likely to do on Election Day is based on precious little data and the resulting uncertainty will effectively be captured by our estimation methods. However, the fact that so few voters send such mixed signals also means that our ignorance of these types of voters will not have a large impact on our results.

Applying our LD Vote Predict model to the most recent wave of our poll data, we currently predict that 79 percent of Latino voters will choose the Democratic candidate Hillary Clinton, 18 percent will choose Republican nominee Donald Trump, and 3 percent will cast votes for other candidates. This estimate is within the confidence interval of our previous estimate from October 6 of 82 Clinton/15 Trump/ 3 other (+/- 5.5).

Whether the final tally will be closer to 75 percent or to 84 percent for Clinton may depend on the Latino turnout in Florida, which has the fourth largest Latino population among states and the least Democratic-leaning Latino voters in the nation. Even in Florida, however, the tides are turning, as twice as many newly registered Latinos have registered as Democrats than as Republicans, a ratio more consistent with figures elsewhere in the nation.

Our statistical model estimates over the seven waves of our weekly tracking poll have reached as high as 82 percent for Clinton but never dipped below 77 percent. It is looking extremely likely that Secretary Clinton will set a new record of Latino support, possibly by a large margin.

Justin H. Gross is Chief Statistician at Latino Decisions and Assistant Professor of Political Science at UMass-Amherst. Justin holds a Ph.D. in Statistics and Public Policy from Carnegie Mellon University. His applied research interests are in public opinion, Latino politics, political communication, and public policy. He works on methodological problems in measurement, text analysis, and network analysis, and is especially interested in methods that put statistical and computational tools to use in service of our ability to achieve rich qualitative insights.

*NOTE: An earlier version of this post failed to clarify that the turnout rate is expected to increase three to five percent between 2012 and 2016. Net total turnout--including the growth in Latino citizens and registrants--will increase at a substantially higher rate. Latino Decisions apologizes for the error.