Hispanics living in the United States are now increasingly evangelical Protestants or religiously unaffiliated as the number of Catholics among them declines, according to a national survey conducted by the Public Religion Research Institute. 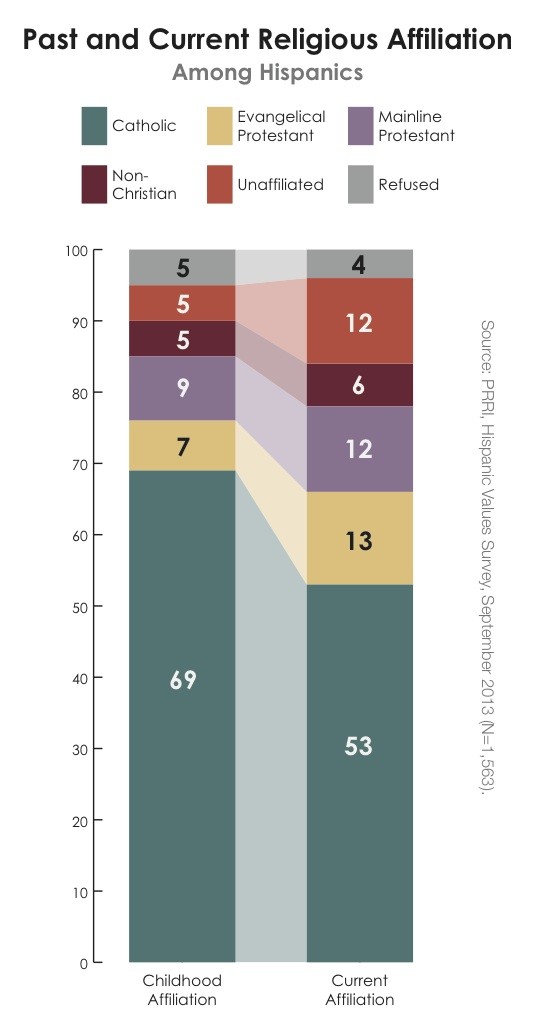 “The rise of religiously unaffiliated Hispanics is critically important for understanding the changing composition and political profile of Hispanics in America,” said Dr. Robert P. Jones, the CEO of Public Religion Research Institute, in a statement. “Many pundits have argued that evangelical growth will lead to a conservative shift among Hispanics over time, but the rival emergence of religiously unaffiliated Hispanics, who are liberal on a range of issues, serves as an important counterweight.”

The survey also showed that Hispanics have a generally more favorable opinion of Pope Francis as an individual than they do of the Catholic Church, as 69 percent of Hispanics surveyed have a positive impression of Francis but only 54 percent said they had a favorable impression of the church.

Research associate Juhem Navarro-Rivera commented to The Huffington Post about the political implications of the survey, citing the increasing diversity in the Hispanic community as something that will have repercussions when it comes to courting the Latino vote. "When looking at 2012 voting habits, the majority of the religiously unaffiliated voted for Obama, where as the majority of Evangelicals voted for Romney. It's really interesting to see this political polarization between the two groups that are growing the fastest. You are dealing with a religious diversity that twenty years ago, wasn't there."

The survey assessed the political, religious, and economic concerns and opinions of 1,563 Hispanics living in the United States, and is being released to coincide with the celebration of National Hispanic Heritage Month.