Large and surprising shares of non-Latino Americans embrace and fully believe a whole host of stereotypes that, in their minds, render the nation’s growing Latino population a community of universally hard-working, honest family-oriented immigrants who are largely living and working in the country illegally with their oversized families, limited education and the help of welfare, according to a study released Wednesday.

This cornucopia of negative and positive ideas about the nation’s 50 million person Latino population are the findings of a two-part analysis released Wednesday by the National Hispanic Media Coalition and the independent polling firm Latino Decisions. In the first, researchers polled 900 non-Latino black, white and Asian Americans about their opinions of Hispanics, where and how they consume news and entertainment. In the second, 3,000 non Latinos were asked to register their opinions about Latinos online after watching video clips, reading news or listening to audio clips focused on Latinos.

The findings have serious implications for everything from social interactions to public policy as both Latinos and non Latinos -- about 83 percent of the population -- make decisions and identify priorities based on their perception of reality. They highlight the degree to which many Americans operate with faulty information and also run counter to the idea that bias and discrimination are less prevalent features of American life today than in the past.

In fact, the most widely held mix of negative and “positive” stereotypes in which people believe about Latinos reflect the most common images, characters and stories non-Hispanic Americans encounter in news stories, entertainment programming or on the radio, the study’s authors found. The most common depictions of Hispanics on radio and TV: Latinos who are maids, gardeners, drop outs and criminals, according to the study.

“Taken together these results are a reminder that Latinos must contend with negative stereotypes attributed to them by individuals and institutions (the media),” the study’s authors wrote.

The poll results released Wednesday revealed that while non Latinos with higher incomes and education levels seemed to espouse slightly more accurate and moderate views of the nation’s Latino population, much larger differences were apparent in the attitudes of the young and old those who have regular direct contact with Latinos and those who do not. Individuals who reported high levels of contact with common Latino sterotypes in news and entertainment programming and those who culled information from conservative media outlets were the most likely to espouse negative ideas about Latinos.

"Conservative radio and Fox News program viewers are less familiar and less favorable toward Latinos and immigrants on nearly every measure included in the survey," the study's authors wrote.

About 56 percent of those polled who reported regularly watching Fox News' The O'Reilly Factor, featuring Bill O'Reilly said that Latinos are on welfare, 50 percent said they refuse to learn English and 42 percent said Hispanics have too many children.

At the same time, 43 percent of those polled who described themselves as regular viewers of The Rachel Maddow Show on MSNBC said they associated Latinos with welfare, 42 percent said Hispanics refuse to learn English and 36 percent believe that Latinos have too many kids.

The largest gap in the opinons on O’Reilly and Maddow viewers circulated around the issue of jobs. About 44 percent of O’Reilly viewers said Latinos take jobs while only 22 percent of Maddow show watchers agreed.

Study: Non Latinos Buy Into Stereotypes About Hispanic Americans
What Does &#039;American&#039; Mean To You? 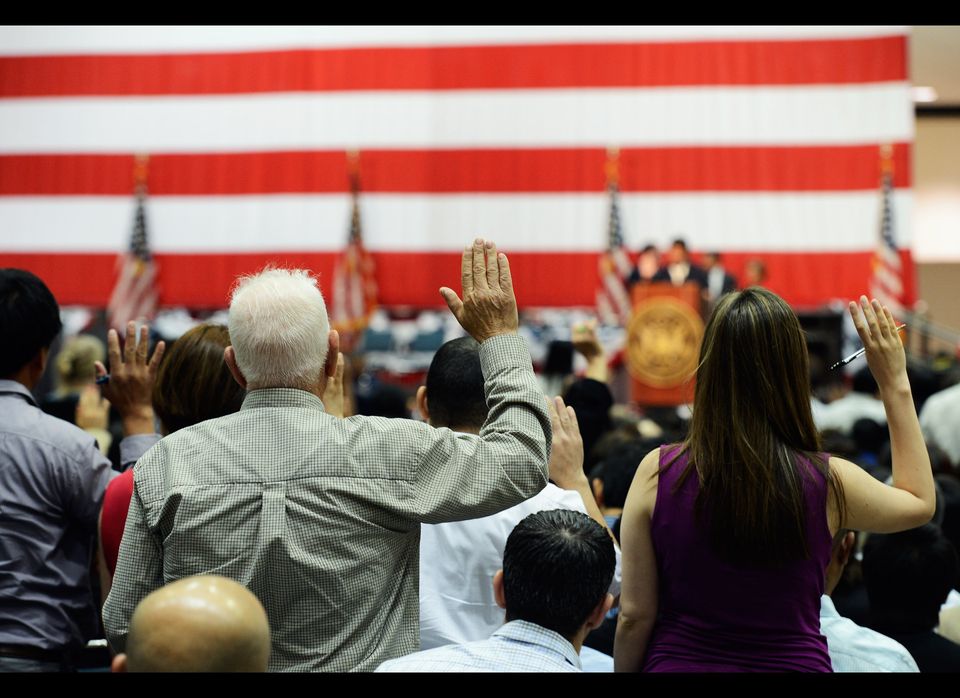 1 / 17
A Country Of Transplants
America: a country of transplants that everyone can call home <em>Koda Wang / The Huffington Post</em>
Getty