This week, in collaboration with the National Association of Latino Elected Officials Education Fund and Telemundo Noticias, Latino Decisions launched its 2016 weekly tracking poll of the Latino electorate. We conducted a similar tracking poll during the 2012 presidential election and included many of the same questions again this year. Because this is the first week of our 2016 poll, it is important to re-examine the 2012 results and compare them with this election from the perspective of Latino voters.

Perhaps the most important question concerning Latino voters is their presidential preference. Clearly, Republican nominee Donald Trump's statements and positions have made him unpopular among Latino voters. However, some have argued that Democratic nominee Hillary Clinton's negatives are deflating her support among Latinos. What do we know about the current state of support for the two candidates and how does it compare with 2012?

In early September 2012, we asked respondents, "If the election were held today who would you vote for, Mitt Romney or Barack Obama?" Including leaners and supporters for each of the two candidates, 65 percent said Obama and 26 percent indicated Romney, a gap of 39 points. When we asked the same question this past week in the contest between Clinton and Trump, the gap was a whopping 51 points: 71 percent for Clinton to just 18 percent for Trump. 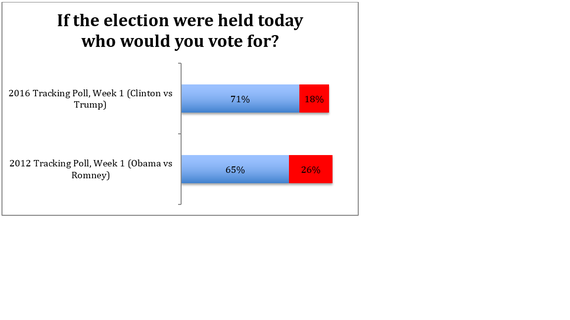 Not only is the gap in vote choice larger now than four years ago, overall Latino support for Clinton today is stronger than it was for Obama in 2012: 71 percent of Latinos support Hillary to 65 percent for Obama, a 6-point gap. The fact that Clinton is outperforming Obama disproves any claims that Clinton is not appealing sufficiently to Latino voters. (It is worth noting that during the 2008 Democratic primary Clinton beat Obama by a roughly 2-to-1 margin among Latino Democrats.)

Meanwhile, our latest results confirm Donald Trump's dismal performance among Latinos. Despite his claims that "the Hispanics love me," the data paints a different picture. Trump is on track to win the lowest share of the Latino electorate of any Republican candidate who sought the presidency since the late 20th century.

Aside from knowing whom Latinos are voting for, an equally important question is: Will they turn out to vote?

Low turnout has historically plagued the Latino electorate, and there is some concern that enthusiasm this year is low and may depress turnout. In both the 2012 and 2016 tracking polls, we asked Latinos to assess their levels of enthusiasm for the election.

In 2012, 37 percent of Latinos said they were enthusiastic and were even more enthusiastic than they were for the preceding, 2008 election. So far in 2016, the 48 percent Latino enthusiasm rate is higher. The 11-point gap between 2012 and 2016 is significant because it demonstrates that Latino turnout rates are likely to exceed those of 2012. Higher Latino turnout and historically low levels of support for the Republican candidate do not bode well for Trump and the Republicans.

During presidential elections, much of the media's attention is devoted to the contest between the presidential candidates. However, for the political parties the outcome of congressional and other races are equally as important, the so-called "down ballot" races. Clearly, Trump's rhetoric and policies have alienated a significant portion of the Latino electorate. Has his campaign broadly damaged the Republican Party brand with Latinos?

The answer is yes. In both 2012 and 2016, Latino Decisions asked Latinos to evaluate the political parties. Response options included: 1) doing a good job reaching out to Latinos; 2) doesn't care about Latinos; or 3) is being hostile toward Latinos. 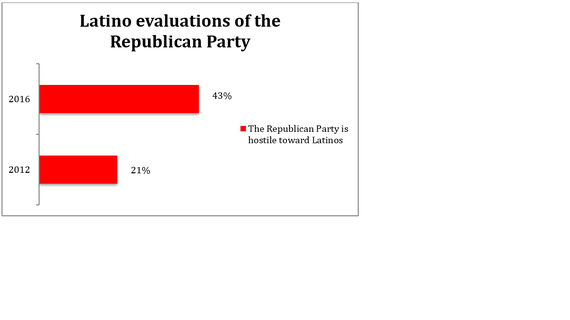 This is the second presidential election where Latino Decisions has launched a weekly tracking poll. Our data collection efforts in 2012 allow us to compare the degree to which Latino voters are similar or different in their evaluations in this election cycle relative to four years ago. In the remaining weeks until Election Day, Latino Decisions will continue to analyze the degree to which that damage improves, worsens or remains constant.

But the data thus far indicate dramatic differences in just four years. We find a Latino electorate that is more partisan and energized in 2016 than it was in 2012. The damage done by the Trump campaign is clearly evident in the first week's tracking poll results.

Andrian Pantoja is Senior Analyst at Latino Decisions, and Professor of Politics at Pitzer College.

Methodology. Latino Decisions interviewed a total of 511 Latino registered voters between September 12-September 17, 2016, as the first wave of an eight week tracking poll on behalf of NALEO Educational Fund and Noticias Telemundo. The tracking poll will subsequently add a fresh cross-section of 250 new interviews each week that are combined with the most recent n=250 from the previous week, as is standard practice in tracking surveys. The margin of error for each weekly release will be +/- 4.4%. Latino registered voters nationwide are randomly selected from online panels to be interviewed in English or Spanish, at the respondents' discretion. Demographic and state distributions are weighted to match the most recent Census estimates for Latino registered voters. The poll was directed by Adrian Pantoja and David Ayón, senior analysts at Latino Decisions.