As his campaign heads toward defeat, Donald Trump has intensified claims of a rigged and fraudulent election. One of his most outlandish claims is that undocumented immigrants "pour into the country so they can go and vote." This type of statement has the potential to undermine voters' faith in the integrity of the electoral process. Trump's call to monitor polling places adds to worries of voter suppression, as minority voters may face intimidation from "monitors" or have poll workers question their eligibility to vote.

The issue of minority voter suppression has been an ongoing controversy since African Americans were afforded the right to vote in 1870 with the passage of the 15th Amendment. Throughout American history, there have been periods when electoral barriers kept African Americans and other minorities away from the polls and eras in which those barriers were diminished. Today, barriers to voting are on the rise and Trump's statements are adding to concerns that minority voters could face significant obstacles that prevent them from casting a vote in this presidential election.

Political scientists find that the voting process is not uniform across states and precincts. These differences can have a profound impact on determining whether the process of voting is easy or difficult. For example, states with strict voter ID laws have witnessed a decline in turnout among minority voters. Barriers also include the rolling back of early voting, elimination of same day registration, purging of voter rolls, and changes to absentee and provisional ballot requirements.

The quality of precincts can also be an obstacle to voter turnout. A research study by Barreto, Cohen-Marks and Woods found that minority voters were more likely to reside in areas where polling places were not easily accessible or where poll workers were not as knowledgeable on voter rights, which depressed turnout in those areas. In short, there are a myriad ways voting can be suppressed. To what degree have Latino voters been affected by such barriers?

In Week 6 of the Latino electorate tracking poll undertaken by Latino Decisions, the National Association of Latino Elected Officials Education Fund and Noticias Telemundo, we investigate the degree to which Latinos have faced barriers to voting. Specifically, respondents were asked, Thinking over your experience with registering to vote and voting in prior elections, have you ever had any of the following problems/factors/when registering to vote or voting? Respondents were presented with seven potential issues they may have faced. Figure 1 presents the findings. 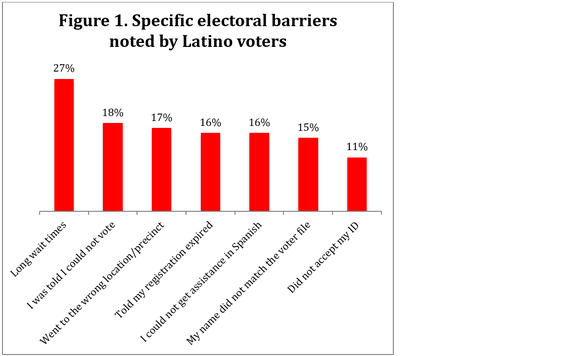 The most common hurdle reported by 27 percent of respondents is experiencing long wait times at the polls. In focus groups I have conducted, it is not uncommon to hear Latino participants say that they decided not to vote if there were long lines of people at the polls. Given family and work obligations, the act of voting can become a secondary priority if it becomes a time-consuming process. Efforts to roll back early voting directly affects the time one has to cast a vote. Shockingly, 18 percent of respondents were simply told by a poll worker they could not vote. Seventeen percent of respondents did not know the location of their polling place.

Other barriers include being told that their registration had expired (16 percent); an absence of bilingual materials or poll workers (16 percent); having their names missing from the voter file (15 percent); or having an ID card rejected (11 percent). Many of these barriers could be eliminated if polling places were accessible and if poll workers were adequately trained. On the other hand, we should not rule out the consequences of voter restrictions enacted by state legislatures or that poll workers deliberately mislead voters. Clearly the data show that Latino voters have faced a wide-range of obstacles at their polling places that can dissuade many from voting. In the context of this election, an additional barrier Latinos may confront is the possibility of voter intimidation or heightened surveillance by poll workers.

Over the course of the tracking poll, we have observed that over three-quarters of Latinos say they are "almost certain" they will vote in this election. Seventy-two percent say that the 2016 election feels more important than previous elections. Despite this enthusiasm and willingness to vote, a significant number of Latinos may be unable to cast a vote because of some of the electoral barriers identified in this poll.

The 2016 election has two countervailing forces that will impact Latino voters. On the one hand, the presence of Donald Trump is mobilizing Latinos to turnout and vote against him in record numbers. On the other hand, Trump's claims of voter fraud could dilute the power of the Latino vote as a result of voter intimidation or heightened barriers at the polls. Latino antipathy toward the Republican Party is reaching historic heights; in week six of our tracking poll, 78 percent of respondents say the GOP is being hostile or doesn't care too much about Hispanics.

If Republicans want to repair the damage done by Trump's campaign and make inroads with Latinos, it is critical that they challenge the rhetoric and policies that are discouraging Hispanics from casting a vote on Election Day.