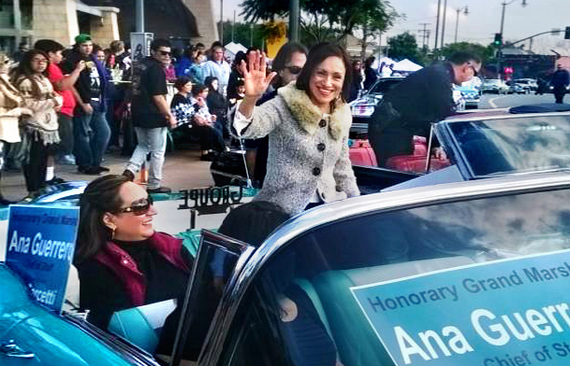 Not that you could have guessed it from the most recent Republican presidential debate, but this is the month -- from September 15 to October 15 -- when Latinos are officially celebrated for everything we have achieved and contributed to this country.

In many ways, this is our moment: we are the nation's fastest-growing demographic group and a major cultural influence on art, music, food, religion and much more from coast to coast. Our workers are the backbone of many sectors of the U.S. economy, and are the fighting force behind many of the hardest-won victories for labor rights in American history.

And yet the celebration of Latino Heritage Month is bittersweet, because we remain the most underrepresented group in politics and government leadership.

We were only 8 percent of the nation's voters in last year's midterm elections, and the numbers are dismal in states with the largest Latino populations.

Consider Texas -- where just 39 percent of eligible Latino voters cast ballots in the last presidential election and Latinos, at 38 percent of the total population, represent only 23 percent of elected state legislators.

In my home state of California, America's most populous, Latinos are more than 38 percent of residents -- yet make up less than 20 percent of registered voters and a mere 16.5 percent of the total electorate. In a state that prides itself on diversity, that leaves Latinos starkly underrepresented at every level of government.

As a Latina who believes passionately in the power of politics to improve the lives of all our citizens, this is a problem I take very personally. And I'm particularly troubled that the grim picture for Latinos generally is even grimmer for women. I look at city government here in L.A. and see only one Latina on our 15-member city council. (She is also the only woman.) Around the country, Latinas occupy only about 1 percent of the more than 8,000 political offices at the state and national levels.

Obviously, this has to change. And it's important to understand that it's not going to happen on its own. Latinos and Latinas can't sit back and wait for power and access to come through sheer demographic strength. We need to organize and acquire it.

When my boss, Los Angeles Mayor Eric Garcetti, took office in 2013, we commissioned a report on the status of women and girls in the city. The report revealed that while women as a whole are underrepresented, Latinas are by far the most underrepresented group in the city workforce.

Latinas make up 44% of the working age population in the city of Los Angeles, yet only 18 percent of the women in executive leadership positions within Los Angeles City Departments are Latinas.

Mayor Garcetti, to his credit, is committed to improving this picture. When he appointed me Chief of Staff, I became the first Latina (and person of color) in L.A. history to serve in that position. More than half of the appointments he's made to city commissions have gone to women, with Latinas comprising the largest percentage of women serving on boards and commissions. Not only has this added important voices to the table, it has also expanded the pipeline of those qualified to run for office -- giving Latinas and other women critical experience as policy-makers and public servants, and providing the network of relationships they will need if they want to run for higher political office. Today's commissioners will be tomorrow's state legislators, tomorrow's city council members, tomorrow's mayors.

That's what we've done at the level of city leadership in L.A. But there's obviously a long way to go -- and some of the change has to come from the bottom up. If you are a Latina interested in running for office, I encourage you to establish a track record of achievement, build your network of relationships, and polish your public profile. You should also get in the habit of raising money for a cause or candidate that you care about. Fundraising is a fact of political life and you need to be effective at it to win.

To those of you, male and female, who are concerned about the lack of minority representation, I have words of advice as well. If you are in a position of power and influence in your network, workplace, or industry -- use it. Hire and promote Latinas into positions of authority. Mentoring a rising star is good, but not good enough. Sponsor them, become their advocate. If you are fortunate to have power and influence, do for at least one Latina what Mayor Garcetti has done for me -- hire her, promote her, give her opportunities to shine, and share your power with her.

If we want more Latinas and other women in office, we need to organize, organize, organize. When you are not born with the political power to advance your agenda, you have to build political power from the ground up by organizing people and money. I learned that lesson a long time ago, as a community organizer determined to make our political leaders more responsive and accountable to the people they serve.

As we reflect this month on the contributions Latinos have made to American history, let us also resolve to do more for our collective future. Get involved in a community organization that is engaging Latinos and Latinas in civic life. Get behind a talented Latina with a political future and become her advocate. This Latino Heritage Month, resolve to be an activist for equality and representation every month ¬-- and day -- of the year.