With the holidays just around the corner, most employees are thinking about taking time off work.

But for many Latinos, paid leave won’t be an option. According to a study released Tuesday by the Center for American Progress, Latinos have the least access to paid sick days or parental leave, let alone paid vacation.

PHOTO GALLERY
Latinos Least Likely To Have Paid Time Off

Only 38.4 percent of Latinos have paid leave available, compared to 64.7 percent of Asians, 60.4 percent of whites and 57.4 percent of blacks. The study attributes the difference to “historical trends resulting from decades of institutionalized racism and the fact that workers of color are more likely than white workers to be employed in low-wage, low-quality jobs.”

“For too many Latinos, being a good worker and a good family member has become mutually exclusive,” the study states.

In addition to less paid time off, Hispanics often don’t have as much flexibility at work. The study says:

Anyone who has ever gotten the flu, needed to stay home to care for a sick loved one, or welcomed a new child into their home should understand that there are times when employees cannot be at work -- but too often that means losing a day’s pay.

Asian Americans outperformed the other three ethnic groups measured -- often by a solid margin -- followed by whites and then blacks.

The study bases its figures on this year’s Bureau of Labor Statistics’ American Time Use Survey.

Check out the results of the study in the gallery above, or click over to the Center for American Progress to read the PDF document.

All infographics are courtesy of the Center for American Progress.

PHOTO GALLERY
American Latinos: By The Numbers
Voting Made Easy
Register to vote and apply for an absentee ballot today
Register now 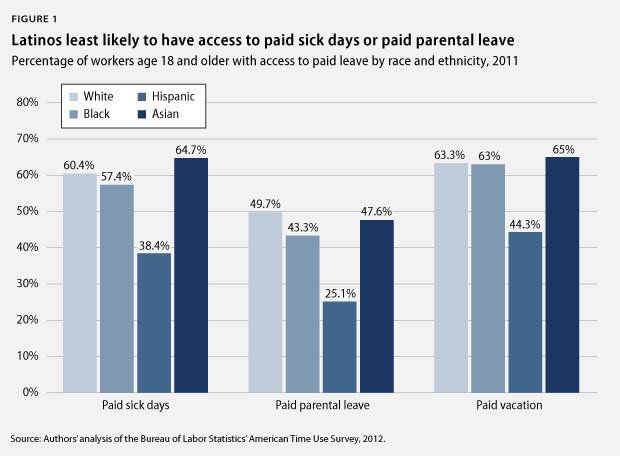 Latinos Are Less Likely To Receive Paid Time Off Work Or Have Workplace Flexibility: STUDY
American Latinos: By The Numbers