Dylan drank here," announced a painter as I approached the door of the Brown's Hotel on King Street. http://www.browns-hotel.co.uk/ "We're touching up to get ready for his 100th birthday. " The man was obviously proud to be part of the countrywide preparation for the 2014 Festival

In Laugharne http://www.laugharne.info/, a small coastal town twenty miles west of Swansea, the soul of Dylan Thomas lingers on. It's possible to walk where he walked, ruminate where he wrote, and lift a pint, where he drank and observed the people who come alive in his poems, plays, and radio broadcasts. The poet lived here for a year early in his adult life, and returned to spend the last years of his life at The Boathouse http://www.dylanthomasboathouse.com/. He is buried just out of town at St. Martin's Church.

From Brown's Hotel in Laugharne we walked to Seaview on Market Street, the commodious house with walled in garden he and his wife Caitlin rented when they were first married. From the top rooms he could look down over the peaked roofs and tiny streets that zigzag down to the Taf Estuary. I kept thinking of of the rows of houses in his play Under Milkwood, where the narrator is over the tops of the roofs seeing into the inner minds of the residents. 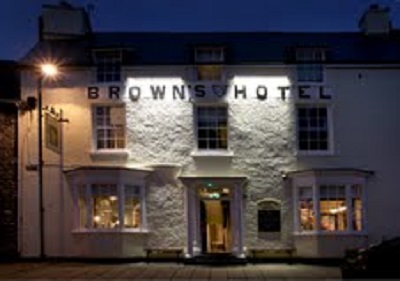 A few blocks down at the pebbled waterfront, actually an expansive beach that wound around the town, it was low tide and the utterly quiet Taf Estuary was flowing into Carmarthen Bay. For a long time the air was utterly still. We walked alongside the ruins of Laugharne's Norman castle, and sat in the restored tower, where Dylan would go for solitude and where he wrote Portrait of the Artist as a Young Dog. From our seats we were able to look over to a panoramic view of the sea which was so much a part of his poetry and prose.

We took the long path, high with bushes on either side, past the castle and up along a cliff to The Boathouse, a stark, three-story white building set into the hillside, and perpendicular to the Taf River. Dylan, his wife Caitlin, and their three children lived in the Boathouse for the last three and a half years of his life, thanks to benefactor Margaret Taylor, who bought the property for the family. Now a museum and bookstore, the small building contains some family furnishings. We drank tea on an outside picnic table downstairs--the deck--and looked out onto the water. Still mesmerized by the tour of The Boathouse, the biographical film, and the recordings of poems and plays spoken in the live voice of the poet Dylan, we tried to imagine the everyday lives of Thomas family in the late 1940s and early 1950s 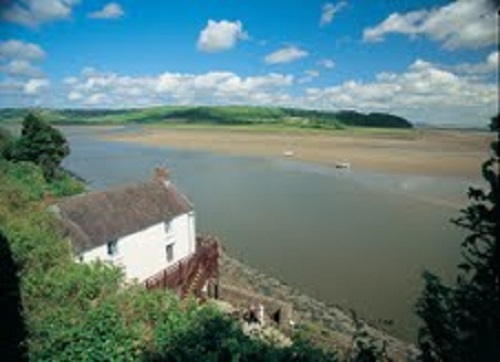 When I cupped my hands over my eyes to peer into the Gatehouse, a former garage that he called his "work hut," I felt like I'd been granted entrance into his writing life. Books rested haphazardly on small shelves. A gas lamp and a typewriter sat strategically on the desk. Scraps of crumpled paper and an empty beer bottle had been tossed to the floor. It was thrilling to think that he finished the play Under Milkwood in this tiny room, characters from various Welsh towns coming to mind as amalgams while the Taf River flowed by down below. 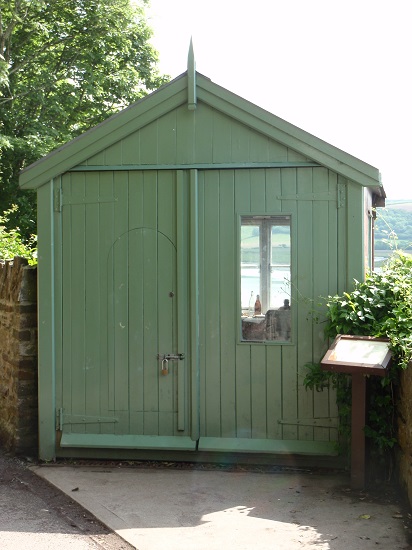 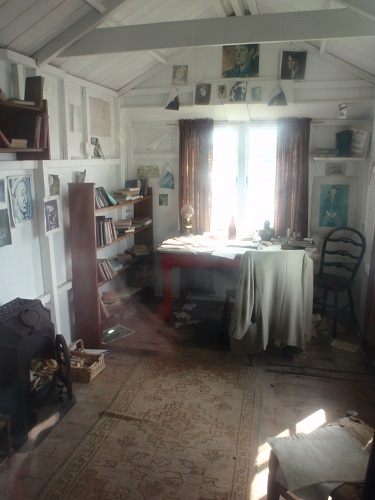 For many years Laugharne was considered the setting for the widely produced play Under Milkwood, in which inbred characters in the fictional Welsh town of Llareggub let loose with their dreams of love, lust, and death. However, his preparatory drawings for the play at the Welsh National Library are almost identical to the coastal town of New Quay, with its three layers of attached, pointed roof houses.

While he lived at the Boathouse, he also wrote the poem "Over St. John's Hill," arranged as a view through the windowpanes, and his famous "Do Not Go Gentle into that Good Night," asking his seriously ill father to fight death. Dylan would work a half day in the Gatehouse, and then spent time in the pub at Brown's Hotel in the afternoon and later in the evening. As he was drinking, he was collecting material.

Later we stood in the hillside cemetery of St. Martin's Church, looking down at the simple white wooden cross that marks both the graves of Dylan and Caitlin. It's a somber spot. Black and white lettering on one side of a white wooden cross mark his dates, 1914-1953. The other side gives hers: 1913-1994. The Welsh countryside with its white farmhouses, green undulating hills and stripes of green forests is the backdrop. 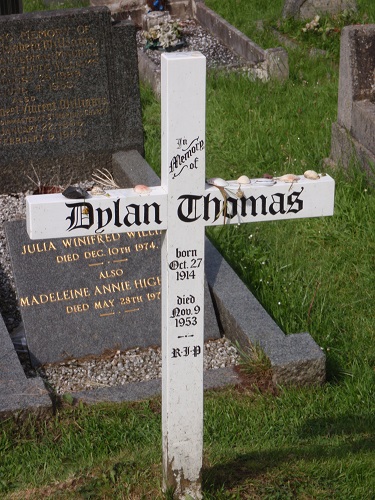 Laugharne is one of many spots on the Dylan Thomas Trail http://www.dylanthomas.com/index.cfm?articleid=2326. The day before we visited the Dylan Thomas Center in Swansea , which has an excellent exhibits on Thomas's life and work http://www.swansea.gov.uk/dtc. and sells maps of the Dylan Thomas Trail that we followed up the coastline by car. In the evening we slept at the Dylan Thomas Birthplace Home, now a Swansea B&B http://dylanthomashouse.com/ where owner Annie Haden cooked us a six course meal akin to the kind the poet's mother served. Annie has restored the house to exactly the way it was in 1914 when the family moved in. See the official Wales Tourism Board for more information: http://americas.visitwales.com/regions-of-wales/swansea/