Disclaimer: Just for the record: For the most part, I think our president walks on water-- and god forbid I ever say anything that makes Sarah Palin sound sensible.

Last night I laughed along with President Obama and David Letterman at the mention of the words "death panels." Ironically, just hours before Obama appeared on the Late Show, a study was released--in time for National Alzheimer's Day--and it's no joke:

More than 35 million people around the world are living with Alzheimer's disease or other types of dementia....Barring a medical breakthrough, the World Alzheimer Report projects dementia will nearly double every 20 years. By 2050, it will affect a staggering 115.4 million people.

That's a lot of death panels.

It's classic that death panels have become a trigger for comedy. We often laugh most at the stuff that makes us squirm. It's so much easier to laugh than to talk about it.

Nothing strikes more at the core of life--than death. The numbers alone--in people and in dollars--make it urgent that we do talk. Death deserves discussion--even without this new study--as 77 million baby boomers--known for ushering in the Age of Aquarius--approach the Age of Medicare.

That's just one part of a complex conundrum that touches on ethics and science and religion and politics and finance and medicine and law--and calls for the wisdom of some modern day Solomon. Though I can still remember debating the merits of euthanasia in junior high, the advancements of science have come far faster than our solutions. And I think any solution starts by having those conversations we don't want to have---not only as a society, but with our public officials, our doctors, our families, and ourselves.

Maybe it's easier for me than for most people. You could say I'm lucky--that I've faced death--and I don't fear it as much as I once did. Plus I've got genetics "on my side." My family tree and all its branches are riddled with disease. I never dreamed of living into triple digits--no one related to me has come close to 90. My mother died of cancer at 41. When I got cancer myself at 45, I used to say that my goal was to live long enough to get Alzheimer's.

Fourteen years past cancer, even if I'm approaching Alzheimer's, I'm not complaining. Though I'd sure wish for a happier ending. Years ago I still held hope that I would live to see a "cure" for the diseases that killed both of my parents. The reality is that unless I get cancer again, I fully expect to descend into dementia someday from Alzheimer's, so dominant on my father's side of our family tree.

Like death, dementia is an equally rich minefield for comedy. I believe there's nothing too sacred to laugh at, so for years I've been joking with my family; warning my husband that he'd be dealing with my diapers and drool. Making my children promise to "pull the plug" when I don't recognize them any more.

I only wish there had been a plug to pull--that could have relieved my sister and brother and me from watching helplessly as our once brilliant father went from being our rock to being our responsibility.

Millions of other families can testify to one of the cruelest aspects of Alzheimer's: not only does it rob its victims of their memories; it also affects the memories of the people who love them. My children are left with memories of their grandfather similar to those I have of my grandmother--a grandparent who looked at them without seeing them; a body without a soul.

I know my father wouldn't have wanted this for the end of his life; and I don't want this for mine. When it's allowed to take place, a discussion of death proves its value on many levels--so I hope our culture will expand its examination of this issue from comedy to real conversations. 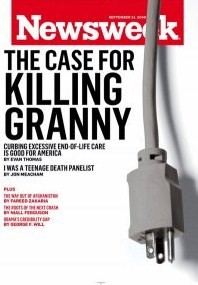 Maybe you saw the recent Newsweek cover with its hard-to-miss headline: The Case for Killing Granny--which is about the financial and emotional burdens of end-of-life care.) I don't want to get tangled in the health care debate; but for me, thinking ahead to dementia, the headline hit home.

I'm not sure society could ever reach a point of agreement. I'm not sure we need to. Even within my own immediate family, I can't speak for anyone but myself. And my opinion might be hard to accept---just like my gallows humor is sometimes.

To me this issue boils down to the question of quality vs. quantity of life. And I believe we are entitled to direct the path of our own lives---including the choice of how to end them. I support anyone who wants to prolong life as long as possible--for whatever reasons. For me, assuming I develop Alzheimer's before there's a cure, forgive me for saying-- the decision would be a no-brainer. I want an escape before my family is forced to experience my mental decline. I would choose to determine-- with my rational mind --the point at which I believe my dignity would outweigh my death.

Though medicine has plenty in its magical bag of tricks to extend my years, personally I would be satisfied to have another comedy staple--Dr. Kevorkian--perform his own brand of magic when the time comes. I'm not a grandmother yet--- but I hope my children would have the courage-- and the choice-- to pull the plug---or to make that case to "kill granny". And I'm not joking this time; I'm dead serious.

More:
healthy livingelderlyAlzheimer'send of life care
Newsletter Sign Up
An essential daily guide to achieving the good life
Subscribe to our lifestyle email.
Successfully Subscribed!
Realness delivered to your inbox