It's not every zombie film that you can share with a 12-year-old daughter and 80-year-old mother in-law and have them exclaim they loved it.

Until Facebook, every June was like a funeral. The likelihood that I would ever see or hear from the 300 or so graduating seniors was small -- aside from an occasional homecoming game or trip to the mall. But I finally dropped down the Facebook rabbit-hole and discovered what these folks had done with their lives. Some might even meet up for a beer -- if it wasn't too awkward for the 41-year-old father of four to meet with his 46 year-old teacher -- even if dropping the "Mr." was too much to ask.

They are dentists, funeral directors, roadies, teachers, doctors, store-owners and a few had found their way to Hollywood in various capacities. Dan Casey, a 2000 graduate is a screenwriter and attended the Sundance Writer's Workshop after attending the American Film Institute for graduate work. It was his October 2008 post that caught my attention... 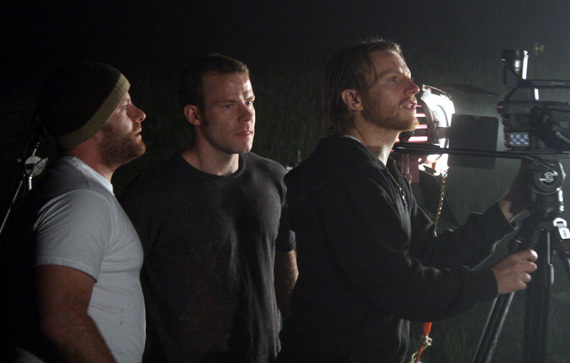 Brett ('96) and Drew ('98) attended Royal Oak Dondero High School and were both students in my Beginning Video class. They continued to take the advanced classes with Dick Rockwell where they produced award-winning work -- generally leaning toward the comic. Their father supplied his Detroit house and created photographic visual effects for Sam Raimi's seminal 1981 Evil Dead. Brett, unfortunately, was exposed to some of the gorier effects in person when the three year-old came downstairs one night.

So I dressed up, expecting that my gray hair would probably get me cast as a teacher extra, not a reunion attendee. When I was entering the back door of the guys' former middle school, I tried to do the morph-view. What would these guys look like 10-12 years later. But before I got in the doorway I heard, "Hey Mr. Walsh."

Kevin Van Hagen ('99) had spotted me. Along with Brett, Drew and Andy Drummond ('97), Kevin was the film's co-producer and took me over to Brett and Drew who were reviewing Drew's storyboards before shooting the dance scene. For a techno-geek like me it was thrilling to see the professional lighting and camera equipment along with the professional atmosphere of the organized chaos. Kasey Bell who works at Fox Animation on American Dad and Family Guy was one of the actors in that day's scene involving a zombie hiding under a giant seal-mascot head so he can apologize for jilting his fiancee at the altar. 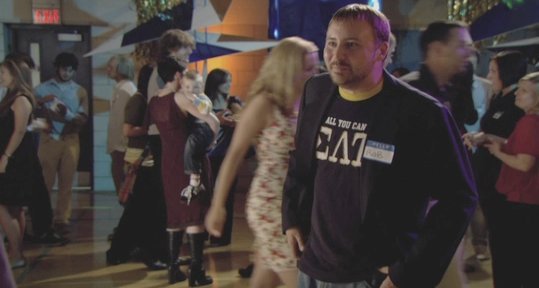 Deadheads is a zombie/comedy/road-trip/buddy film for which the Pierce brothers left their day-jobs on Family Guy and Futurama. Through an engaging trailer and endless meetings, they hustled enough funding to do the job right. There were plenty of volunteer hours, particularly from the producers who elected to shoot the film in their home state and take advantage of the short-lived film-incentives rebate (and sleep on their mom's couches). 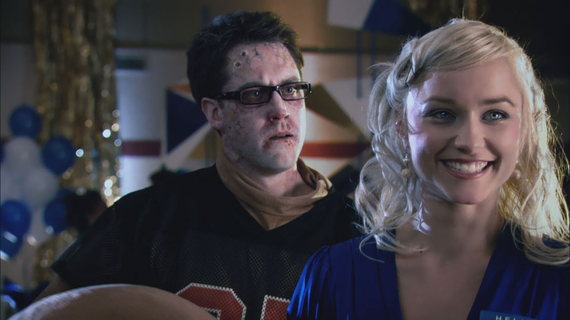 I didn't end up being an extra that night; I was too interested in parking myself behind the "video village" where Drew and Brett watched the scenes. I would look over the monitors and the reality of the old gym and it looked like an old gym. I'd look down again and it looked, well, like a movie!

A few nights later, I met them in the dark cold woods behind the empty lot that had been Mark Twain Elementary where one of the two lead zombies is held at gunpoint while relieving himself. There was a slight delay since the prosthetic that is to break off during the scene wasn't delivered yet. Parts is parts, after all. And after many different takes for comic-delivery of the action and lines, it was a wrap.

The following June I saw them back in town walking across the street in Royal Oak. I flagged them down and they told me they had a few extra scenes that needed to be shot. One of them needed to be a scary laboratory/dungeon. I recommended the basement of their alma mater. Dondero High School, now the middle school, was built in the 1920s and parts of it looked the same as it had when Coolidge was still president. 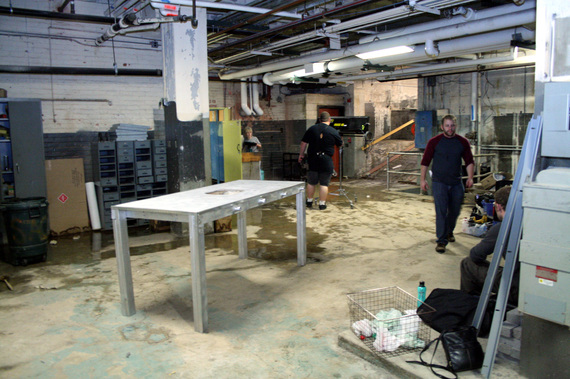 On my kids' last day of school, they both bolted toward my car to have their mean dad turn them around and head back inside. But when Aidan discovered that Drew was behind the animation of Futurama's Bender, he grudgingly agreed to re-enter.

Royal Oak Schools was again kind enough to assist its alumni; they had already agreed to have exteriors of the classic building shot the previous fall. A few days later, at 5:30 a.m. the laboratory was under construction. 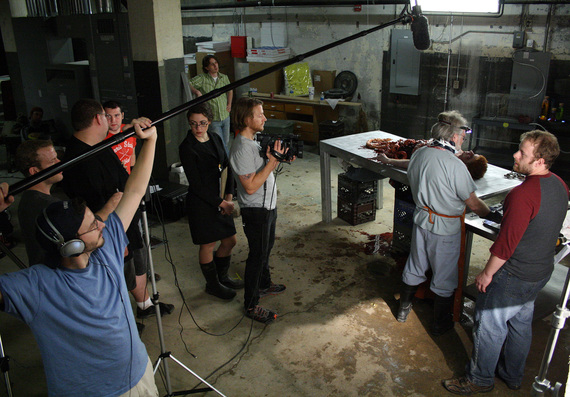 I was in charge of pumping mysterious fog through the rear doorway behind the gruesome disemboweled young man on the table who was about to awaken to his guts spilled out, courtesy of Patrick Halpin, who also was manager of the local Red Wagon Wine Shoppe. 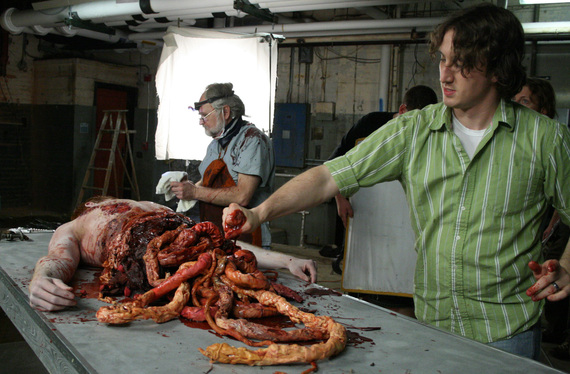 It was a long, hot day and, again, a joy to see the team effort. Even the guys' mom, Carol, helped out, supplying gruesome jars of yuck for the props along with "craft services," the movie jargon for "food." 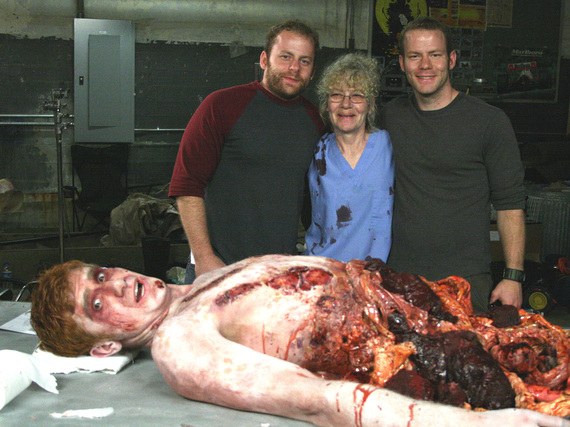 Proud mama with her boys (pose with their work)

A year later it was great to attend the Traverse City film festival where the film was given the Founders Award for Best Horror Film and Michael Moore said, "Never have I ever loved zombies this much." 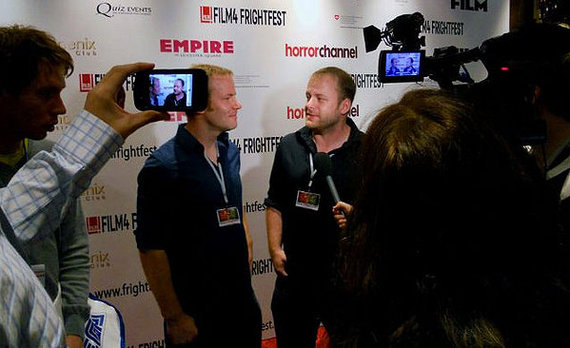 It's been honored at 14 other film festivals and has enjoyed a successful Netlix run. You can even catch fellow MyMediaDiary contributor and former student working in the movie industry, Kale Davidoff, as an extra zombie-in-plaid in the opening credits (4:40)... 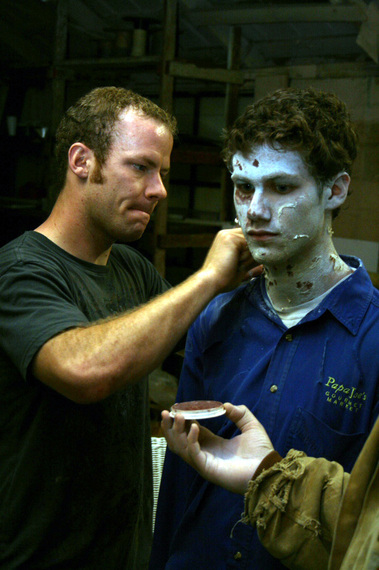 One of the great privileges of teaching is to see former students succeed, including Ben Webster ('00) as the foul-mouthed zombie hunter McDinkle. 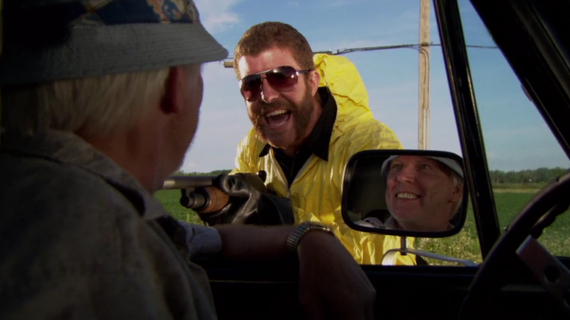 And thanks to Facebook and some miscellaneous blood and guts, one former teacher couldn't be prouder of these guys. The film is heart-warming, blood-curdling and hilarious as classes from '97 to '01 follow their dreams into a wonderful nightmare.

For more info on Deadheads, you can visit their site at www.frobrofilms.com. 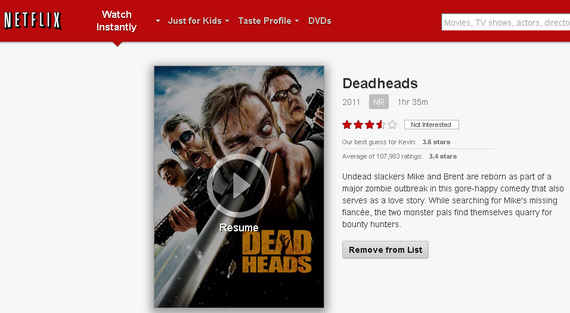