Something happened to me this weekend; it was equal parts hilarious and embarrassing. My friends and I were spending a few days at our new cabin in the Colorado mountains. Our mission was a complete top-to-bottom cleanup. The cabin had been sitting empty for many years before we bought it -- there were cobwebs, dust, and grime as far as the eye could see.

One morning, my friend Sue and I were on the porch sorting through a pile of dusty knick-knacks. I picked up a small wooden birdhouse. "How cute!" I cooed as I slowly opened it. I was surprised to see two black eyes. They belonged to... a HUGE MOUSE.

I dropped the birdhouse and immediately started waving my arms, jumping up and down and shrieking hysterically. Sue had no idea why I was doing this, but she started doing the same thing. So there we were, on the porch of our new cabin, screaming and hopping around like complete fools.

Then, almost in unison, we started giggling. "Why were you screaming?" I asked. "I don't know -- it was contagious!" We laughed so hard we cried.

Just 24 hours earlier, I was overwhelmed (three keynotes and four workshops in three weeks) and in pain (recovering from foot surgery). And that was before I'd even thought about what was going on in the world. It's been a distressing month, hasn't it?

But there I was, feeling happier than I had in a long time. The cure to my bad mood had been simple -- I just needed a good laugh. (And in case you're curious, Sue and I did muster the courage to free the mouse once we got ahold of ourselves). 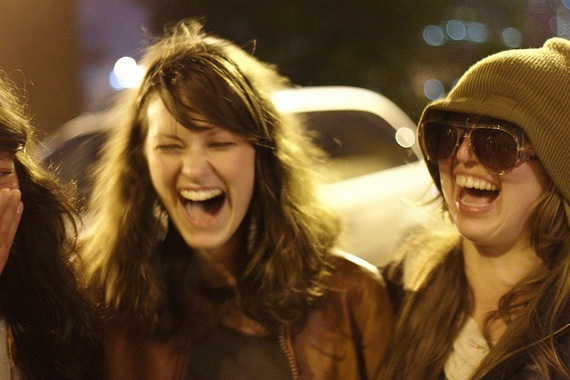 The Science of Laughter and Resilience

Scientifically, we know that laughter is a powerful force. When we laugh, our bodies release endorphins and dopamine, nature's feel-good chemicals. The result? We can better cope with stress, find hope, and see problems in new ways.

Bill Cosby wisely observed that "once you find laughter, no matter how painful your situation might be, you can survive it." Dr. Cosby knows what he's talking about: His life has been punctuated by struggle and loss, yet he's managed to (a) be remarkably resilient and (b) make a career as a brilliant comedian.

You might be wondering, How could I possibly laugh when life knocks me down? Whether you have a bad day or experience a catastrophic life event, there's a pretty thin line between tragedy and comedy.

The best depiction I've ever seen of this phenomenon is a classic episode of The Mary Tyler Moore Show, "Chuckles Bites the Dust." In the episode, Mary and her WJM-TV coworkers attend the funeral of Chuckles the Clown, a character on the station who unexpectedly dies after grand marshaling a circus parade dressed as a peanut (as Mary's boss Lou Grant explains, a "rogue elephant tried to shell him").

Mary spends most of the episode chastising her coworkers for making jokes about the situation. But during Chuckles' funeral, she starts laughing and can't stop. When the preacher delivering the eulogy sees Mary, he implores, "Don't try to hold it back. Laugh for Chuckles!" At that point, Mary bursts into hysterical sobbing.

It is one of the greatest TV episodes of all time for more than its humor; it points out a profound paradox of the human experience. When faced with stress or misfortune, we can laugh and we can cry.

I'm not saying you should start creepily chuckling whenever life gets tough and ignore the tragedy completely -- but the balance you choose can be the difference between victory and defeat.

Let me give you an example. I have a client who has been leading her organization's employees through three years of unrelenting change. She's been everything from their shoulder to cry on to the target of their anger to their scapegoat for the inevitable missteps of change. But in the midst of all of that, she's thriving. Why? She's kept her marvelous and courageous sense of humor intact. In fact, when I spend time with her, I literally take notes so I can better understand how she does it.

So especially in times of struggle, humor is your friend. As humor expert Gina Barreca points out, laughter "addresses the same issues as fear, not to dismiss them, but to strengthen our ability to confront them."

The "Act As If" principle also applies to your sense of humor. In one study, researchers found that when participants were asked to smile (regardless of their real mood) they found more humor in their surroundings than those who were asked to frown. Another study asked participants to narrate films about grisly accidents in either a humorous or serious tone. The humorous narrators reported better moods and less tension. I see this as scientific evidence that you can fake it till you make it.

Let's look your fall in the driveway in another way. Even if you didn't find it funny when it happened, you might laugh when you tell the story a few weeks later. Why? We find severe events funnier as time passes. As Mark Twain said, "humor is tragedy plus time." So, when something stressful happens, ask, "Will I think any part of this is funny in a week or a month?" Give yourself permission to experience that reaction now.

As you read this, I sincerely hope that you're not going through a tough time. But if you're feeling stressed, burnt-out, or sad, I hope you can find some humor to sustain you. And if all else fails, you should watch "Chuckles Bites the Dust" -- I promise, it will be impossible not to feel a little better!

I'd love to hear your tips and tricks for maintaining your sense of humor in tough times. Leave a comment and share what works for you!