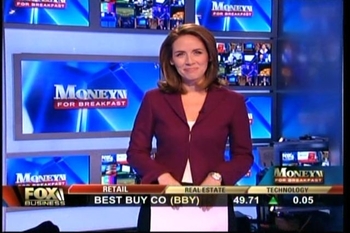 Will it change business television as we know it? Will it hammer CNBC into the ground? Will it make synergistic use of the Wall Street Journal and the pretty smiles of young, nubile anchorwomen around the clock? TVNewser might know; the poor dude has been up since before 5 a.m. tracking the launch (which is more than TimeWarner did, given that they updated the channels somewhere in the neighborhood of 2 a.m. and their listings for FBN began at 6 a.m.). But for those who were awake to welcome it into existence, FBN did indeed launch at 5 a.m. as breathlessly anticipated — and the world of business television will never be the same again.

That's been the advance spin — witness USA Today's headline "Fox Business Network Blazes New Trail" (published yesterday, before it went went live to actually start blazing). Fortune's Tim Arango publishes a big in-depth look today and calls it "the first brick in Rupert Murdoch's attempt to build a global business information Goliath" (there's another one that didn't get much press earlier this year, maybe you heard that he took over the 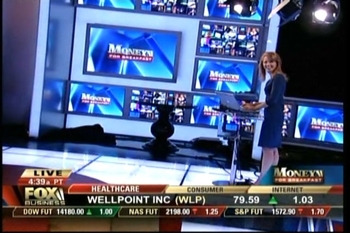 Wall Street Journal?) (Though CNBC's exclusive content-sharing agreement with Dow Jones runs 'til 2012, so, well, there's that.) Arango describes the channel's "Main St. vs. Wall Street" ethos as "slick yet populist" and describes "Happy Hour" co-host Cody Willard self-penancing after he drops a too-jargony phrase (but meanwhile "weather" has been recast as "Business Traveler's Forecast"). FBN launches in 30 million households — about a third of CNBC's reach — but all the talk has been about how the upstart net is about to take a bite out of CNBC's lunch; still, according to the LAT's Matea Gold, "advertisers are willing to pay a premium for the chief executives and other well-heeled viewers that CNBC argues are not measured in the ratings because they watch from their offices." These are arguably the viewers who find "jargon" neither intimidating nor boring, so the relative efficacy/popularity of both models has yet to be seen.

In the meantime, we set our DVR and watched from 6 a.m. to see for ourselves. Verdict: Jovial and jocular (and actually jock-ular given the number of sports-related stories), visually pleasing, with toothily winsome "Money For Breakfast" anchor Alexis Glick beaming so hard her eyes crinkled (seriously, getting a screengrab of her smiling with her eyes open is a challenge). (NB: There is a "Money for breakfast and the chicks for free" joke in here somewhere, given FBN's already-buzzed-about penchant for pretty ladies and tapping of contributors whose on-camera appeal might not necessarily derive from a business resume. I want my Fox Biz TV?)

But — even a micro-managed Roger Ailes coup d'état isn't immune from bloopers. Question: What's a bigger deal, something not working or something being wrong? Anchor Peter Barnes reported from Times Square on a sleek Bugati speedster, and hyped what would happen when he slid behind the wheel — and then nothing. Aw! Sometimes it happens (NB check out his scribbled and note-laden script). Not ideal, but these things happen. More of a concern is a blatant error made by Jenna Lee, who reported that McDonalds in London would be offering Free WiFi, "taking a page from the Starbucks playbook." That is roundly incorrect: Starbucks does not provide free 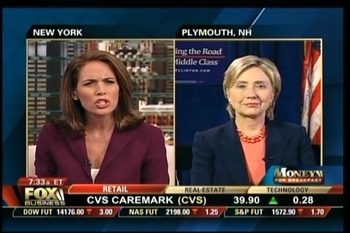 WiFi, as anyone who's ever tried to pick up a signal in there knows. We checked with an expert just to make sure — Starbucks Gossip proprieter Jim Romenesko (who has some other media sideline) who confirmed that "all Starbucks require a T-Mobile subscription; the only "free" is when you use the iPod Touch to download music wirelessly while in Starbucks stores." The Starbucks Wi-fi issue has been the topic of some debate (see here and here), and the framing has been not that McDonalds is adopting the Starbucks model, but that McDonald's may be forcing Starbucks' hand here by offering Wi-fi to sweeten their side in the morning breakfast wars. How a business story is framed and the context that is provided is an essential element of good coverage, and for a first-day story it's an embarrassing rookie error for the channel to be caught in.

(Update: To the extent that I wasn't clear in the paragraph above, I will emphasize that the specific example of McDonalds vs. Starbucks UK is at issue — Starbucks UK offers wifi but not free wifi, and that is where McDonalds is throwing down the gauntlet.)

The other gaffe this morning came from Glick during her interview with Hillary Clinton, where she slipped and said, "But Hillary —" there was a split-second (during which I, and I'm guessing other viewers, suddenly held my breath) and then Glick apologized and re-asked the question to "Senator Clinton." "No problem," said Hillary, who answered and pointedly addressed her as "Alexis." It would have been one heck of a ballsy move to have just left it there — and sure would have made news — but Glick's recovery was quick and Clinton was gracious. Still, it may be the first time Clinton has been called "Hillary" to her face in an interview (wonks, feel free to send the updates if I'm wrong). 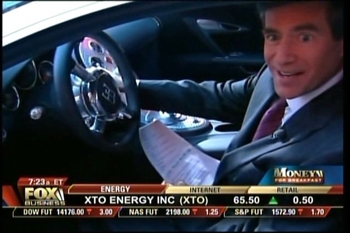 Back to the coverage of others: According to the zone-flooding TVNewser, none other than Goliath-maker Roger Ailes (or slayer, depending on how one frames CNBC) paid the set a visit this morning, and also, here's the schedule. Meanwhile, apparently the reason the Bugati wouldn't start was that you had to do more than just push a button. These newfangled business toys with their highfalutin tricks — sheesh, no one on Main Street needs that anyway.

Update: Mini-gauntlet throwdown in the wee hours by Liz MacDonald reporting from CNBC home turf of Englewood Cliffs, New Jersey, talking about going peacock-hunting...see the vid at ICN here (plus a zillion other posts on FBN here).