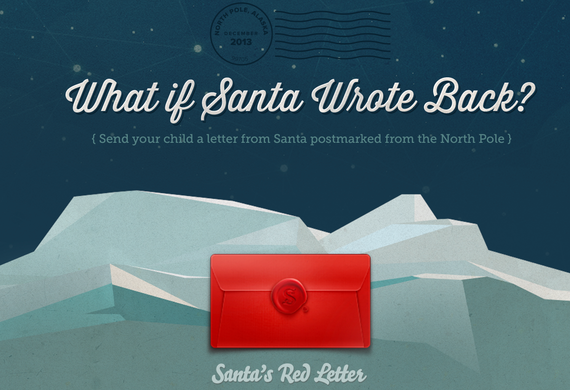 Our converted office is decorated with stacks of red envelopes, piles of dark coal and rows upon rows of festive empty cans of RedBull.

Christmas music plays softly in the background as my wife and I embark on our nightly ritual of creating "From Santa" letters to kids all over the country using Shopify's platform. We play paper-rock-scissors to see who gets to apply the wax seals and I find that my two-fingered "Chuck Norris" is no competition for her "Rock" and glaring stare. So, as usual, I end up at the computer, tracking orders and formatting letters.

I can't complain though. This is part of creating a startup from scratch. This is Santa's Red Letter.

A couple of years ago, I stumbled upon a little-known program from the USPS called the North Pole Holiday Cancellation Service. In a nutshell, you could mail any first-class letter to Anchorage, Alaska and they would stamp it with a North Pole postmark and send it back to you or wherever you wish.

The idea of sending official-looking letters from Santa to kids all over the world seemed like a great idea. After all, there was a demand. I mean, c'mon - millions of letters are sent each year to the North Pole. I thought, why not help the big guy out and write some of them back? There was a need and a fantastic opportunity.

What I didn't know is how difficult it would be to start up a business, much less a successful business. I have always wanted to be an entrepreneurial ninja with the moves of Jackie Chan and the business savvy of Mr. Jobs. I already had a full-time corporate job in the creative/marketing world. How hard could it be?

That first year, I failed to move the idea past the notebook. The second year, I bought a domain and actually built a functioning website before finding out that my payment processor couldn't attach more that 200 characters to an order. Rather than force parents to keep their letters from Santa to a "Hello" and a "Sincerely," I decided to call it quits and wait until the following year.

July of 2013 rolled around and I came across this site called Shopify. To be honest, I knew nothing of the platform but liked the way the site looked over other ecommerce platforms (yes, I guess I am that shallow), and decided to sign up.

I'd learned from previous experiences that I have a tendency to get lost in the details of this-pixel-over-that-pixel and focusing on things that, at the end of the day, really don't make a big difference. So this year, I decided that rather than trying to build the perfect site, I would focus on launching as quickly as possible.

I overcame my design snobbery and purchased a template on Shopify. It was already mobile-friendly and needed just a bit of styling to make it work for us.

On August 4, I pushed that ominous button that made Santas Red Letter open to the world. And then I think I peed my pants a little. Just a little though.

If I could sum up the most important lesson I learned from this experience, it's to PRESS THE LAUNCH BUTTON! If you are a wannabe ninja entrepreneur or a brilliant idea-maker, the best thing you can do is open yourself up to failure.

So get out there and fail as quickly and as cheaply as you can. And, of course, have a Merry Christmas!

Here's what one of our Christmas letters looks like: 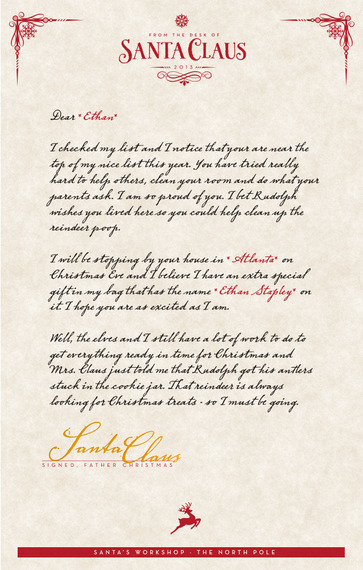 Craig Stapley is a designer, illustrator and founder of Santas Red Letter, whose mission is help children believe in Santa until they are well into their 20s - if not later. He lives in Northern Utah with his wife and five beautiful, though very messy, children.

This year, Shopify's Build A Business Competition is bigger than ever. Shopify is giving away more than $500,000 in cash, prizes and mentorship in its fourth annual competition. Contestants create a store and try to sell the most in their category for a chance to win $50,000 and a VIP trip to NYC to meet their mentor.