Twenty years ago, 189 governments and approximately 30,000 nongovernmental organizations -- activists from around the globe convened in Beijing for a world conference to advance gender equality and women's rights. The U.S. delegation was led by then-First Lady Hillary Clinton, who set the tone not only for the conference, but also for a generation of advocacy on women's rights when she declared that, "Human rights are women's rights and women's rights are human rights." After two weeks of intense negotiations, the 189 countries adopted the Beijing Declaration and Platform for Action, an ambitious roadmap for empowering women and promoting women and girls' human rights everywhere.

On September 27th, 20 years after the Beijing Declaration, nations from around the world will take part in another high-level conference, this time at the United Nations in New York, with the aim of agreeing upon a new set of concrete commitments to advance women's rights for the next 20 years. The discussion will look both at the areas where the world has made meaningful progress and those where we have not. Like Beijing, the conference will be ambitious in its breadth and aims to include a diverse set of voices.

But there will be some women whose critically important voices will be missing from the dialogue around the Beijing+20 conference. Voices that would add a lot to discussions not only about advancing women's rights, but all human rights. Women who have worked to promote freedom of expression and assembly; to ensure people's right to basic health care and education; and to defend children, refugees, and other vulnerable members of our societies. I am talking about the voices of women political prisoners and other prisoners of concern.

Today, we are here to launch a campaign to recognize 20 of those women -- women who should be advocating for women's empowerment and part of the discussions around the Conference in New York in three weeks, rather than being behind bars. We are calling them the Beijing+20 twenty. And every weekday leading up to the Beijing +20 conference, we are going to share the story of one of these women in greater detail. Their names. Who they are. Where they are from. Why they have been unjustly locked up. And the governments that are depriving them of their freedom. Governments that will be sending delegations to the Beijing+20 conference in New York. 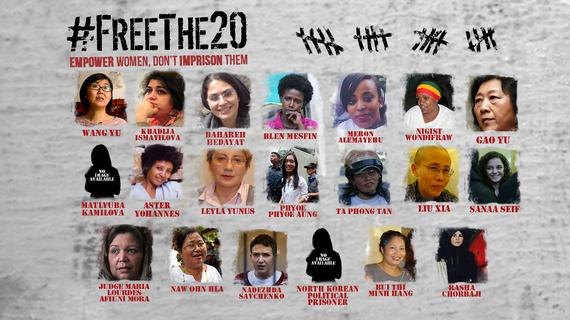 These are just twenty out of the many women who are being deprived of their freedom and the right to participate in the Beijing+20 conference. In naming these women, we are sending a message to their governments and others like them: If you want to empower women, don't imprison them on the basis of their views or on the basis of the rights that they are fighting for. Free these 20 women and free the countless women and girls like them behind bars, because these 20 women only represent a tiny fraction of the women currently being unjustly imprisoned. And the governments detaining them are just a handful of the governments around the world that are locking up women for exercising their fundamental freedoms.

In naming these women, we are also seeking to send a message to the 20 prisoners and their families, and to others like them: We have not forgotten about you. We will keep pressing for your governments to free you. We will continue to remind people of what is lost when you are excluded not only from the conversations like the one coming up in New York, but from your communities and your societies. We will insist on reminding the world how much we lose when your voices are silenced -- today and every day that you are behind bars.

The first of the 20 is Wang Yu, a 44-year-old prisoner in the country where the historic 1995 Beijing Conference was held: China. A commercial lawyer by training, Wang's activism was sparked in 2008, when employees at a train station refused to let her board a train with her ticket. After demanding the right to board, Wang was assaulted by several men and then - even though she was the one who had been beaten -- convicted to two-and-a-half years in prison for what was called "intentional assault." She later told a reporter, "After my miscarriage of justice... I wanted to improve China's human rights system."

Wang did that by taking on the cases of clients who other lawyers feared to represent, such as Ilham Tohti, a prominent Uighur scholar eventually sentenced to life in prison; Cao Shunli, a woman human rights activist who died in March 2014 after reportedly being denied medical treatment while in detention; and those who are known as the "Five Feminists" - young women who were detained in advance of International Women's Day in March of this year for planning a campaign against sexual harassment. For her work, Wang has been harassed, threatened, and smeared in the state-run media. On July 9th, 2015, Wang herself was detained. So was her husband, along with their 16-year-old son. Wang and her husband remain in prison, where they have been denied regular access to a lawyer in custody and have not yet been charged. Their son was released, but is under constant surveillance and has been barred from leaving the country. When at least 159 Chinese lawyers and activists signed a petition calling for Wang's release, many of them were detained as well.

Responding to attacks against her in the state-run press, Wang once wrote, "I believe that during this time of enlightenment and rapid development of the internet...any shameful attempt to smear me is doomed to fail." She said, "The truth cannot be long hidden." In raising Wang's case today and others like it in the days to come, we aim to help her and others expose some of that truth. Let me repeat her name -- it is Wang Yu. 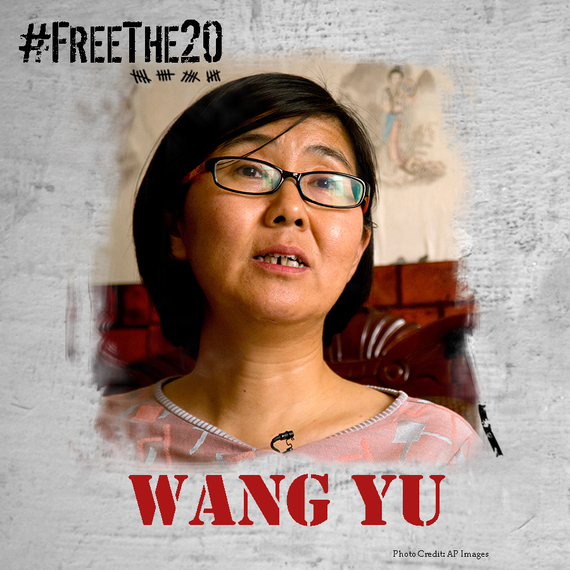 We will continue to repeat Wang Yu's name, and that of other women like her, over the coming days. Women like the brave Azeri journalist Khadija Ismayilova -- another one of the 20 -- who just today was sentenced to seven-and-a-half years in prison. To the media we urge: write about these cases. To members of these women's communities and to our own communities, we urge: take up their cases as your own, and demand their release. And to the governments imprisoning these twenty individuals we urge: if you want to empower women, start by releasing these women. Don't deprive your societies and the world of these women's voices.