Former First Lady Laura Bush has found herself back in the news after an appearance on "Larry King Live" in which she discussed the differences of opinion she had with her husband, President George W. Bush, on abortion and gay rights. During her interview, she cast the issue of gay marriage as something that "will come," owing to a "generational" shift in opinion on the matter.

As it turns out, Bush has this precisely correct. Via James Kwak at Baseline Scenario, here's a snapshot of the country's attitudes toward gay marriage, by age and state, courtesy of a study by Jeffrey Lax and Justin Phillips entitled, "Gay Rights in the States: Public Opinion and Policy Responsiveness". 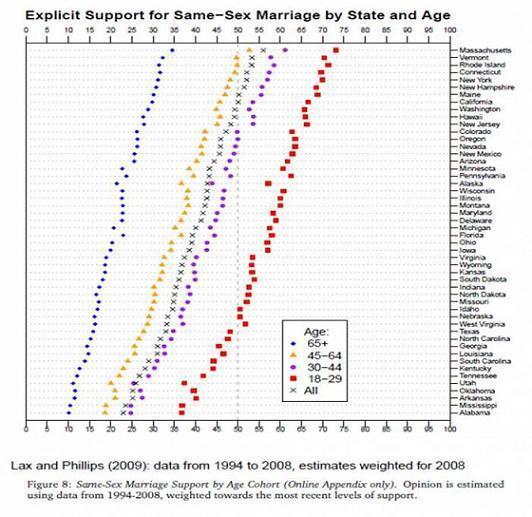 This probably isn't a very nice way of putting it, but basically, the most significant segment of the population that opposes gay marriage is the one that's closest to death. Obviously, gay marriage will be coming to some states sooner than others, but the tide toward marriage equality is inexorable.

It's the nature of things that every new generation tends to be skeptical of those that came before it. It's just a pity that so many Americans are going to reflect upon the way their parents and grandparents approached this issue and find themselves feeling deeply embarrassed.