Laura Heywood is vivacious, entrepreneurial and full of passion. She grew up in Oakland, California and, after attending the University of Puget Sound in Washington, found herself back in California to start her career as an intern with the Sarah & Vinnie show at ALICE@97.3FM (KLLC) in San Francisco. She rose through the ranks of the broadcasting world and ultimately landed as a producer and on-air personality at Sirius radio through her hard-work, attention to detail (remembering that her boss Jim prefers bottled Pepsi over fountain soda), being at a right place at the right time (which led to stepping in as a sidekick, traffic and news reporter at KNBR 680 AM), and a little bit of, as she puts it, "preparation meeting timing". Currently, she is the creator of the popular twitter account Broadwaygirlnyc and the owner of a brand new social media company. We sat down at Davios in NYC and, over a meal of salad, Branzino and veggies, discussed her career, her passions, and her life thus far:

Over a decade ago, and after working at several radio stations in San Francisco, you moved to New York City to work for Sirius. What was that experience like?
I moved to New York knowing no one. So my community became the people I was working with which were a bunch of Maxim dudes that called themselves "dude-bros" and talked about sports and girls and cars. I really got to know what men talk about when women aren't around! Some of that was really enlightening and some of it was really disheartening. It took me awhile to realize that this was not a cross-section of every man in America but rather a very specific kind of guy because the guys that were on the air had to live those lives where they are dating models and have the fastest cars. It was fun to get the perks and be on a list for the parties but I always felt like I was Cinderella at the ball except with a big chip on my shoulder. It was like - I would not be here if I had to wait in that line with these shoes - but its fun to have the red velvet rope pulled back and pretend for a few hours.

What was your role at Sirius?
I was a producer and on-air talent. The way I used to sum up my on-air role at Sirius at the time was like this: If they said, what if we want to do a wet t-shirt contest? I would say, I will judge the wet t-shirt contest happily but don't ask me to be in it! It's unlike any other working environment because the things that we would talk about on the air during my work day would be a human resources big fat X mark anywhere else. Things that went on on-air and off-air were very different although sometimes things were blurred. There were life-size posters of women in bikinis all over the office, for example.

For six years, you have been channeling a fan's perspective on Broadway sightings, reviews and gossip as Broadwaygirlnyc on Twitter. How did that come about?
At some point I read this book called Waiter Rant based on a blog. It was a blog not based on the identity of the person writing it but rather what they are witnessing. And I thought that it would be really cool to have a similar concept to that book but based on Broadway. So, in 2009, when I started using Twitter, it seemed like a fun way to start talking about Broadway. The equivalent of texting all my friends at once except I didn't need to bother anybody who didn't want to be getting those texts. I had a blog, as well, but what really picked up was my twitter account. I would see or listen to something or see someone, and my tweets became these one-off thoughts that became the key to building twitter traffic. I could fire out a tweet several times a day without it feeling like homework. And it didn't take very long before it became a phenomenon. It was something that never even occurred to me. I mean, yes, I had read this book and thought it would be a cool thing for Broadway, but I didn't do any marketing for myself. I just had my blurb on my Twitter account. 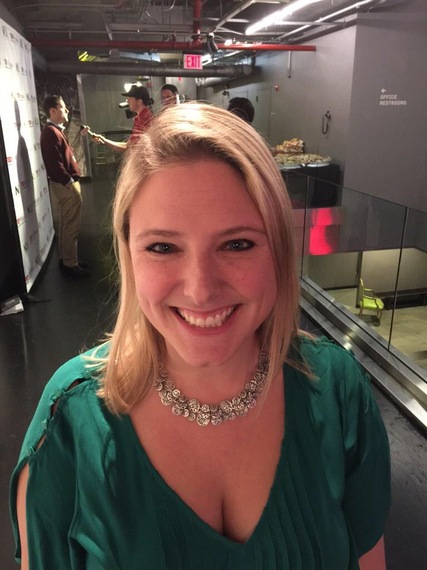 You announced that you are Broadwaygirlnyc at TEDxBroadway. What was it like "coming out"?
One of the reasons that I gave up theater was because of crazy stage fright. So going public was scary because I would no longer have a computer screen to hide behind. But now that the anonymous part is over, I'm very happy and excited.

You launched your social media company Laura Heywood Media in December. Congrats!
Thanks! I was about to hit my ten year anniversary at Sirius and it seemed like a very long time. I had gotten more and more involved in the theater world and realized that is where my passion is and, although I will always love broadcasting, it was time for me to explore something else. So as a ten year anniversary present to myself, I gave my notice!

Tell me about your new company.
All Broadway companies have marketing companies attached that usually run their social media campaign. And they have clever slick marketing campaigns that are great about posting a fabulous picture of the cast and quote from a journalist and celebrity that came to a show. But I realized that the reason why I took to twitter so well is that it's exactly what I do on the radio. I sit in a room by myself, and I talk to potentially one hundred thousand people and every single one of them feels like I'm having a one-on-one dialogue with them. That's what being a good radio host is and that's what writing a good twitter account is. What I am encouraging individuals, companies and shows to do is to bring me on as a consultant for the content that comes in between the calls to action (i.e. commercials) and the marketing team. I'm not competing with the marketing team because the commercials still sell the product. But you need independently entertaining content to make sure people are still listening when that commercial comes around.

What's one thing you would like to tell your 15-year-old self?
It's serendipitous that you ask that. I had a very difficult teenage-hood, and there were times that I really wonder how I survived my teen years. I had this vision one day of how lucky I am now and how fortunate I am that my hormonal roller-coaster has calmed down over the years. I have always kept journals from the time I was 12 years old, and I imagined that 35-year-old me had the opportunity to whisper in the ear of 15-year-old me. So, now, I'm writing letters to my 15-year-old self every week based on journal entries written by my 15-year-old self. As much as I started writing in a journal to get myself through my darkest days as a teenager, now, that 15-year-old me is getting me through any dark times today, and we lean on each other.

What's the best piece of advice you've ever been given?
Take the job that best represents what you're passionate about even though it doesn't pay. I hate to talk in cliches but "do what you love and the money will follow." I don't even know if that's true! All I do know is that I've never had less money and I've never felt richer. That's because I am excited to get up every morning, interact with people that I admire and just spread the love of Broadway.