Lauren Levato is a Chicago artist who previously specialized in bugs. 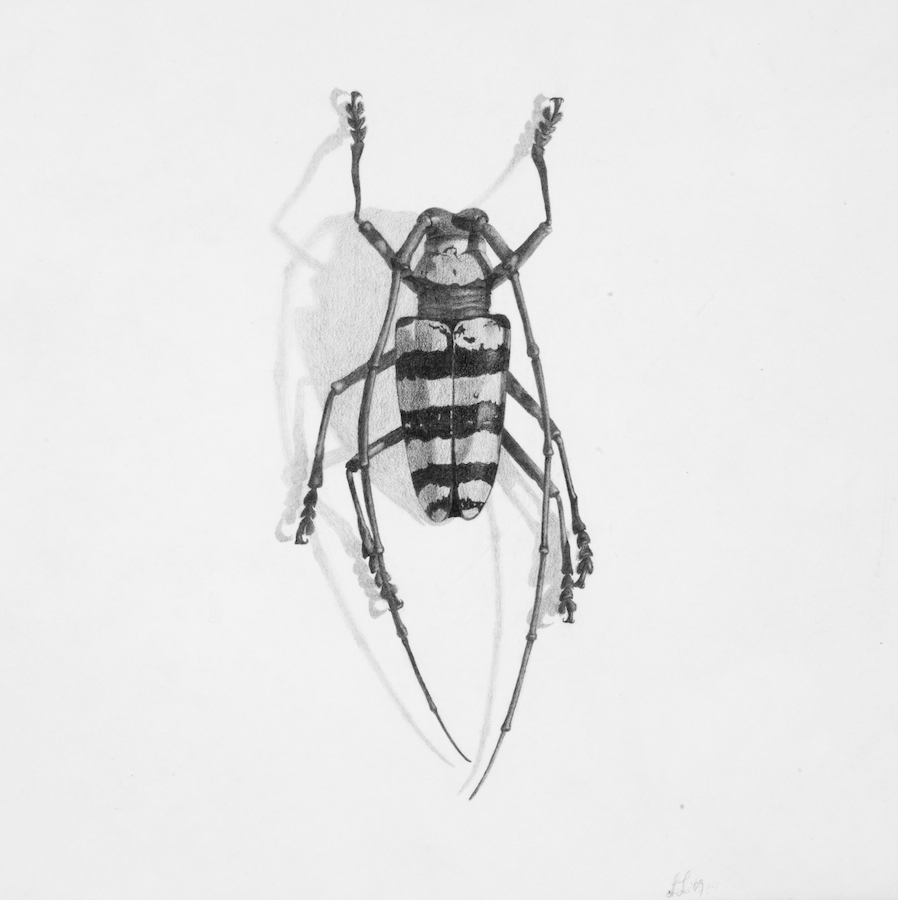 She had been working toward making the emotional and intellectual resonances she sees in bugs pictorially explicit: 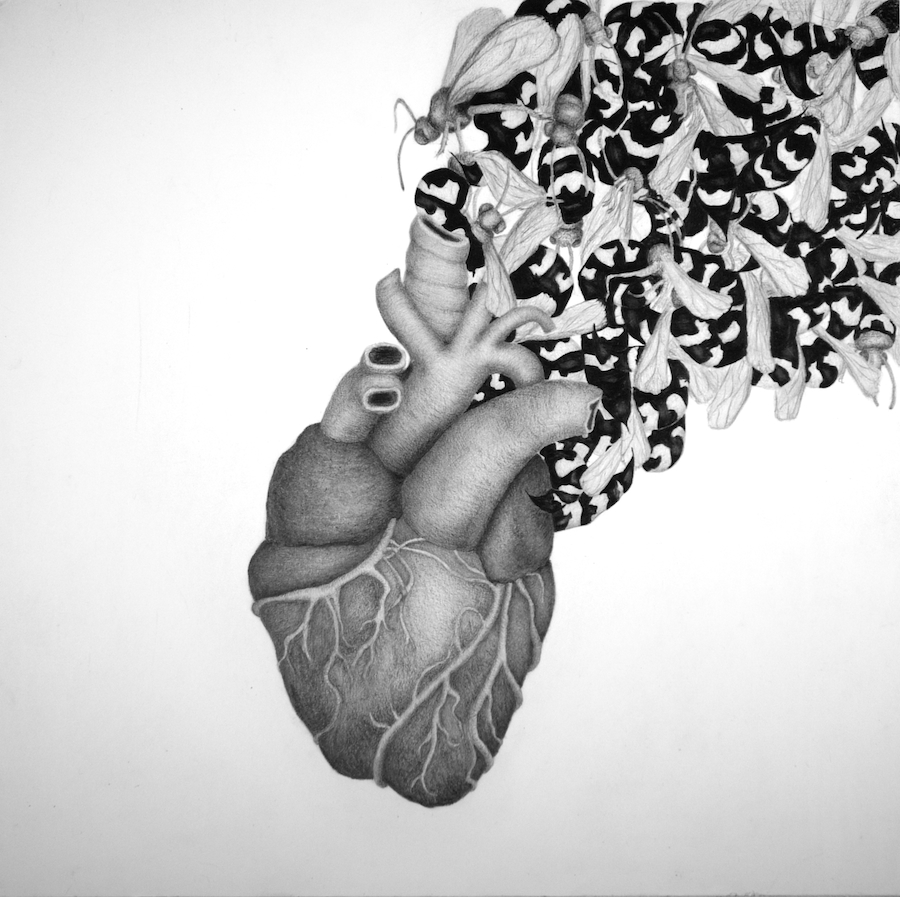 Lauren Levato, From the Bodies of Dead Horses, graphite on Bristol, 2011

But it is only very recently that she has made a breakthrough. Having tackled some personal issues, she was suddenly able to make self-portraits. And her outlook, grounded in the methodical qualities of scientific illustration, opened a very interesting path: 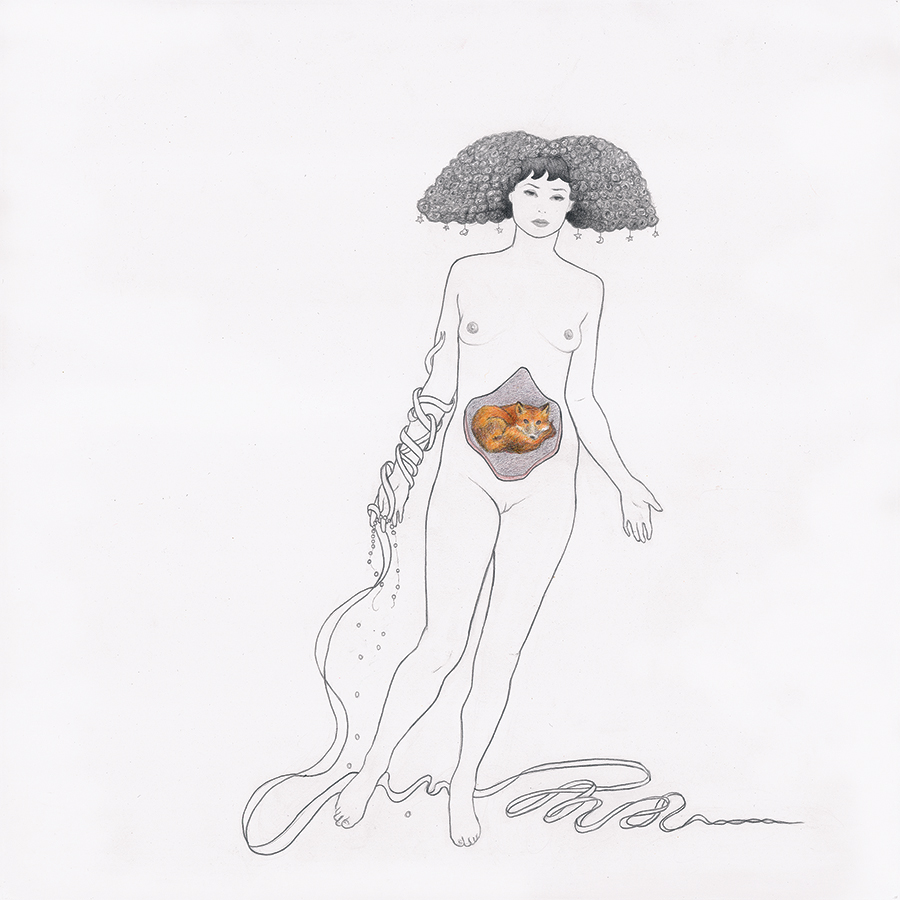 Lauren Levato, Self Portrait as Thief in the Night, 12" x 12", colored pencil and graphite on Bristol, 2012

This could be a one-off until you look at a second one: 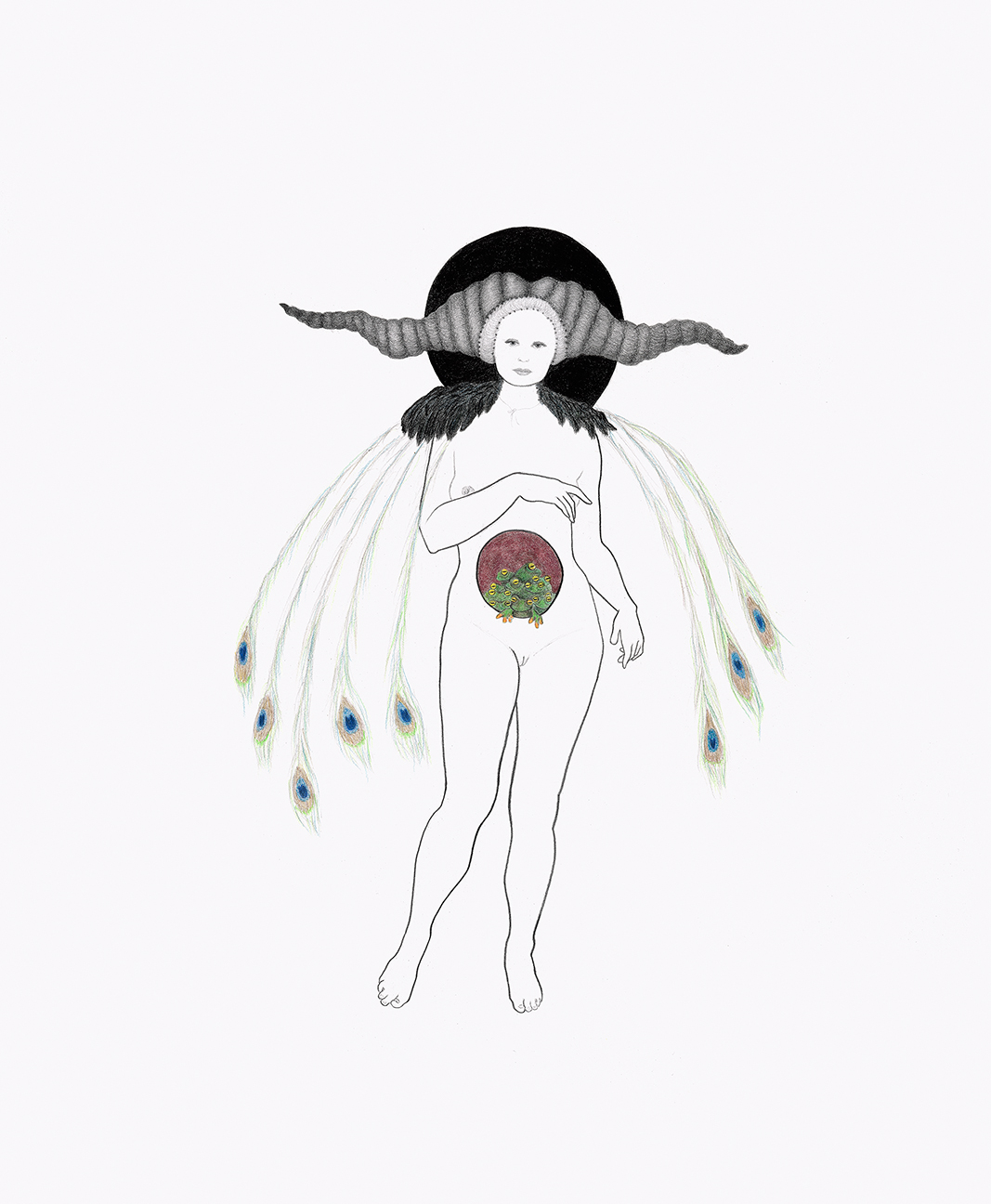 In these drawings, called "Wunderkammer," Levato incessantly repeats not only herself as an image, but more or less the same pose and the same gaze at the viewer. What is the significance of this?

When you have an encrypted but repeating signal, you can try to decrypt it by examining changing and fixed elements in the system of which the signal is a part. Levato herself is fixed in her drawings -- what varies?

The imagery varies. It varies a lot -- like the cabinets of curiosities after which the series is named, she includes diverse animals and manufactured objects: 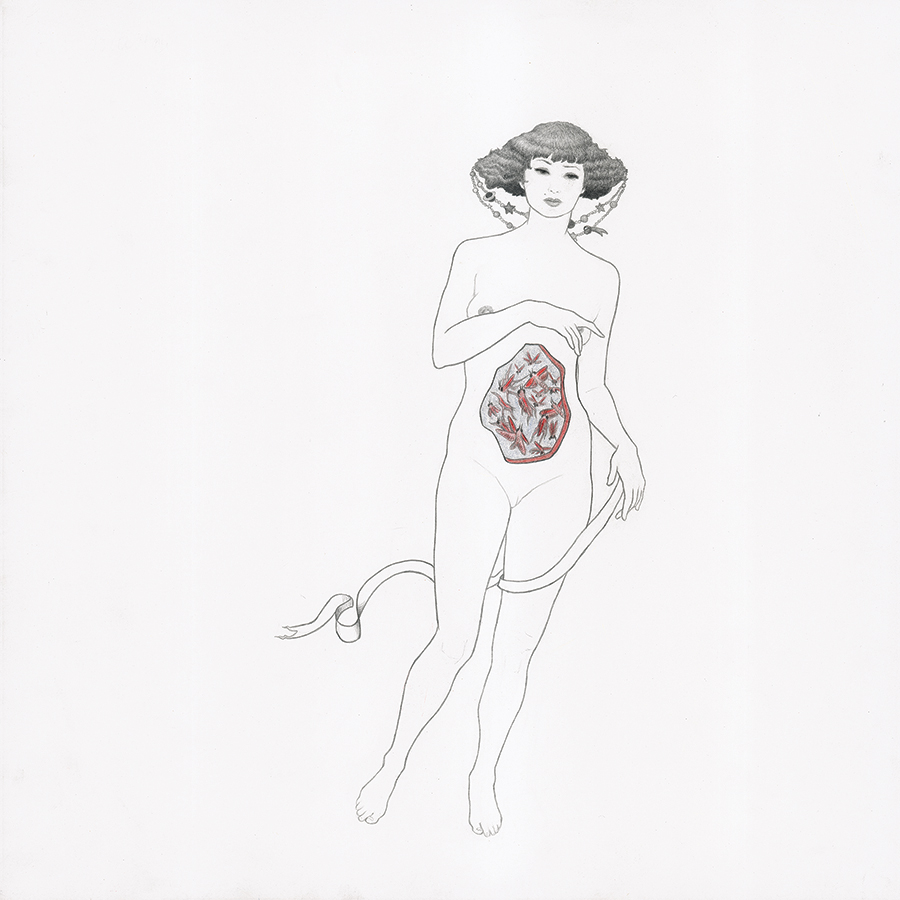 But the variation takes place within a certain set of constant rules. They are all full-length nude self-portraits done with spare, elegant lines. They all involve animals and odd hairdos, and most depict Levato with unorthodox items in her womb. 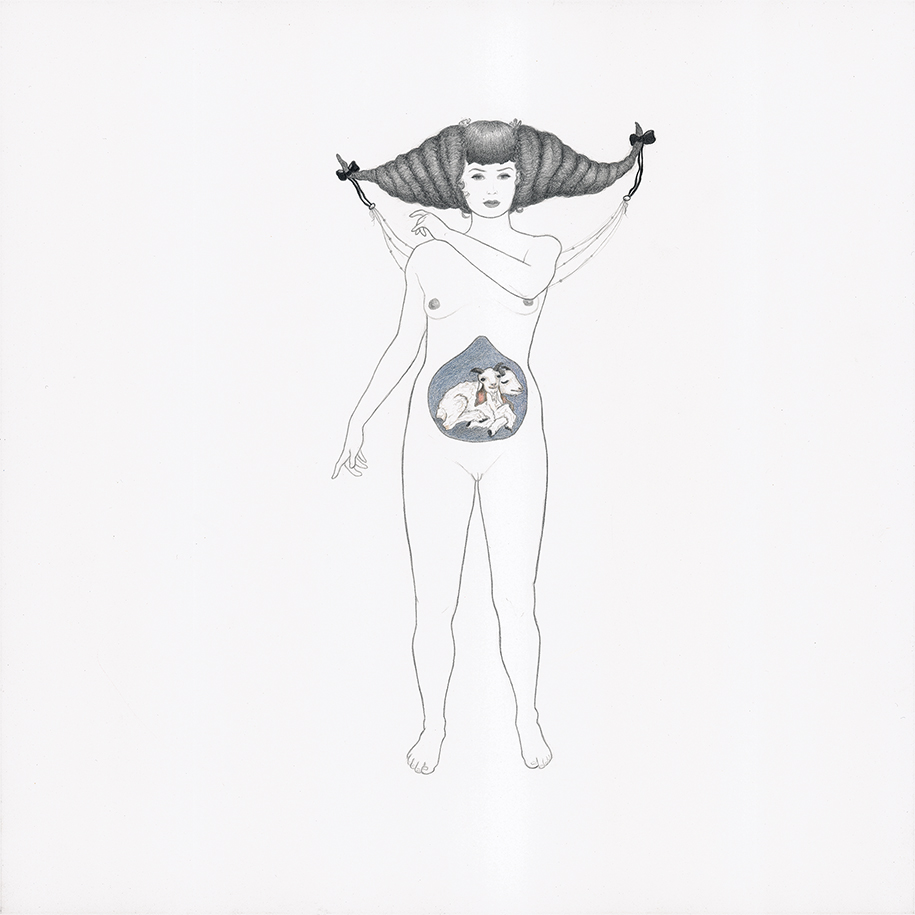 Lauren Levato, Self Portrait as My Sister's Keeper, 12" x 12", colored pencil and graphite on Bristol, 2012

Evaluated in this light, we begin to see that Levato's image construction follows only the most basic rules of visual grammar. The sophistication of the work results not from visual grammar, but from linguistic grammar. Each of these paintings is a sentence:

They are elaborated reflections on the consequences of a series of self-recognitions. The titles underscore this.

It would be very easy to classify this work with the various other instances of pop surrealism which currently abound. I think this would be a mistake. Surrealism, in its original instances and even more so in its current degenerate resurrection, is dedicated to the peculiar, the allegedly unconscious, and the dreamlike, for their own sakes. This is a strength and a weakness. The weakness is that it too eagerly indulges an exclusive focus on preference, or taste, or style.

Levato's objects and arrangements are categorically surrealistic, but they are not ends in themselves. Like her self-image, they are words in her language. Just as her self-image is halfway to a Chaplinesque caricature, so her objects have been partly emptied of their self-contained meanings and character, in order to fit more smoothly into their relations with one another. The meaning of her work emerges from its total composition, not any one part of it.

What is this language she creates? What is the meaning of her work?

I think she is producing a rare form of a common psychological inversion among artists. All art has an expressionist component -- the revelation of the interior life of the artist, their state of mood and thought, the progress of their soul. All art serves, to some extent, as an exteriorization of this interior state, as the objective correlative outlined by T. S. Eliot in Hamlet and His Problems:

The only way of expressing emotion in the form of art is by finding an "objective correlative"; in other words, a set of objects, a situation, a chain of events which shall be the formula of that particular emotion; such that when the external facts, which must terminate in sensory experience, are given, the emotion is immediately evoked.

And yet, while this element is common, and even emphasized among, you know, the expressionists... 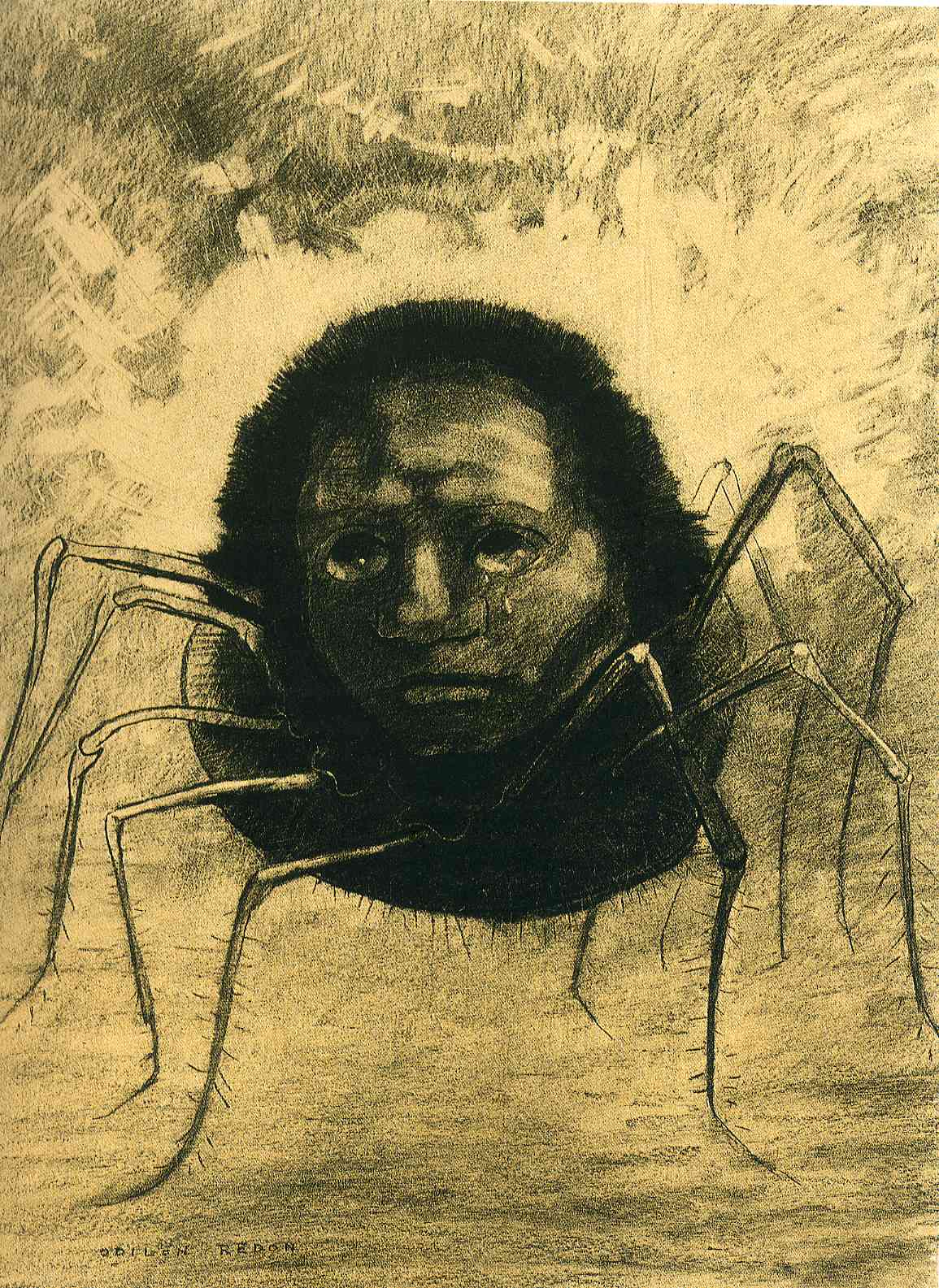 ... it is, generally speaking, disorderly and inchoate, a matter of a self-willed passionate disposition violently expressing itself through bizarre imagery.

Levato, on the other hand, designs her work with a meditative calm. Emerging from science, she applies an artistic equivalent of the dissectionist's practice: the bloodiest of matter, the most methodical of excavations. Her image-objects are partly defined complex symbols representing internal states. She has developed the ability to relate important visuals in her life to specific aspects of her own state of being. She has thus laid portent on top of physicality, and trained herself to draw in a way that conveys both the likeness and the portent -- "This is not itself, it is the substitute for something else." And she has also trained herself to detach, once each exploratory surgery is complete, from the brutal work of conjoining the interior and exterior worlds. Having detached, she can lucidly convey the results. She's got the tastes of a tiger and the sensibilities of a lab assistant.

In some of the drawings, certain symbols are immediately decipherable, as in the Self Portrait as Forgetting: 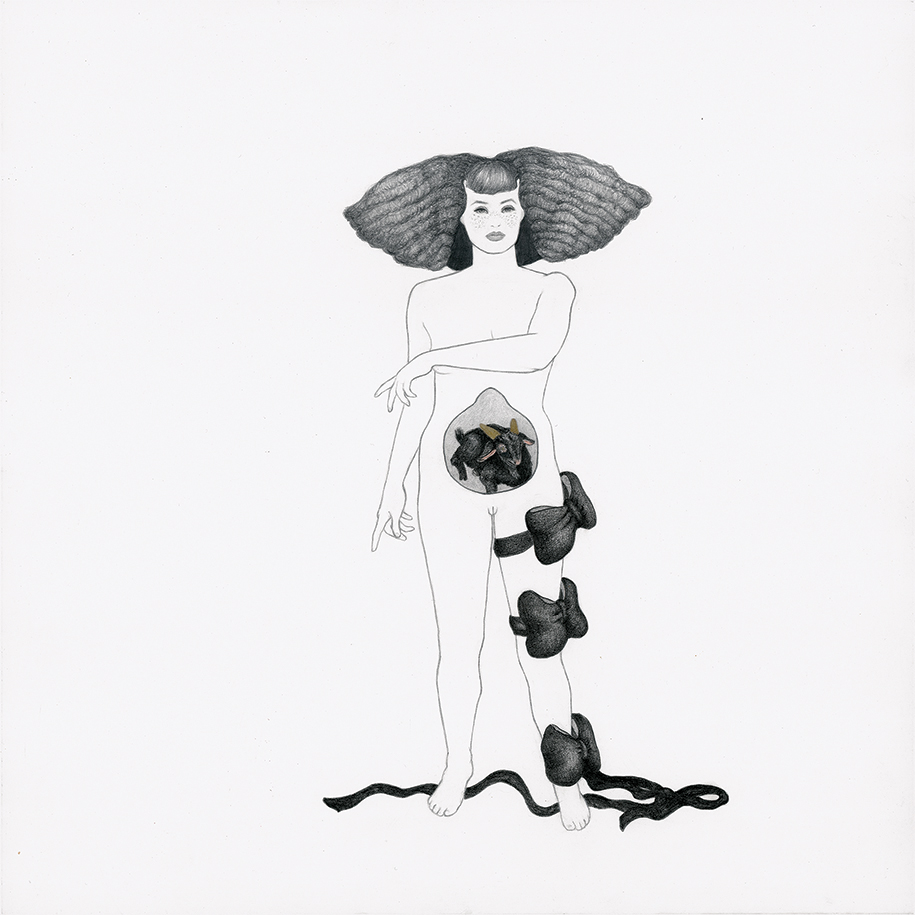 Lauren Levato, Self Portrait as Forgetting, 12" x 12", colored pencil and graphite on Bristol, 2012

Here black ribbons are monstrously large versions of the strings children are told to tie around their fingers, to remember. In other pieces, though, the set of symbols defies simple analysis: 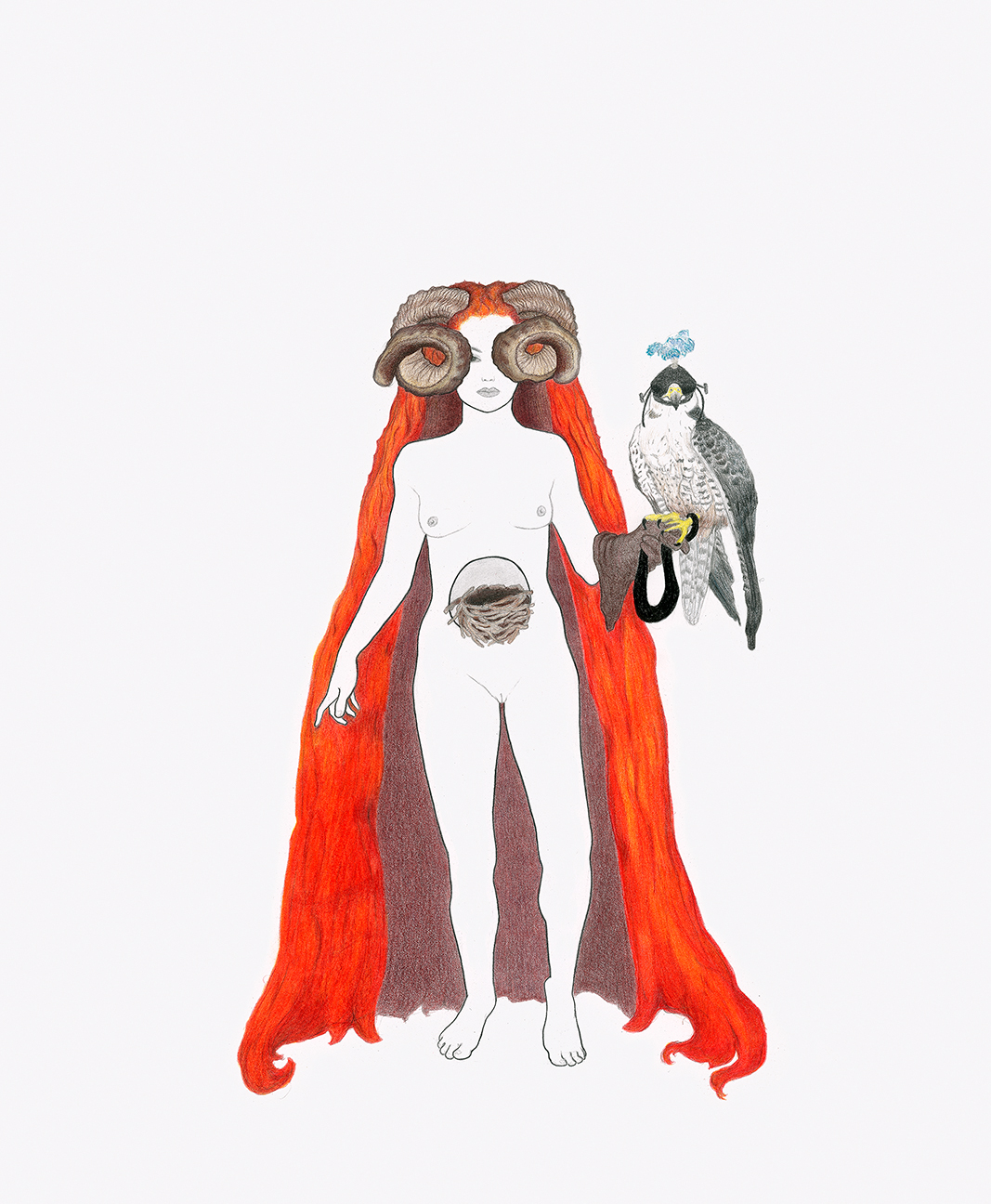 Yes, I know what a caul is, and I'm still not going to claim I get it.

But this is important -- that sometimes I should be unable to get it. It is exactly when the symbol is indecipherable that its nature as a symbol is most evident. The falcon, nest, horns and hair/cape clearly form a network of symbols. They mean something to Levato; they don't need to mean anything to us. What we receive is the unnerving imminence of the perplexing but loaded symbol, the threatening authoritativeness of the Tarot. We are not traveling on Levato's path; her art is not the same as her path. Our path with her art is an experience of the intellectual and emotional texture of Levato's journey. We see her walking. We do not see, entirely, where she walks. 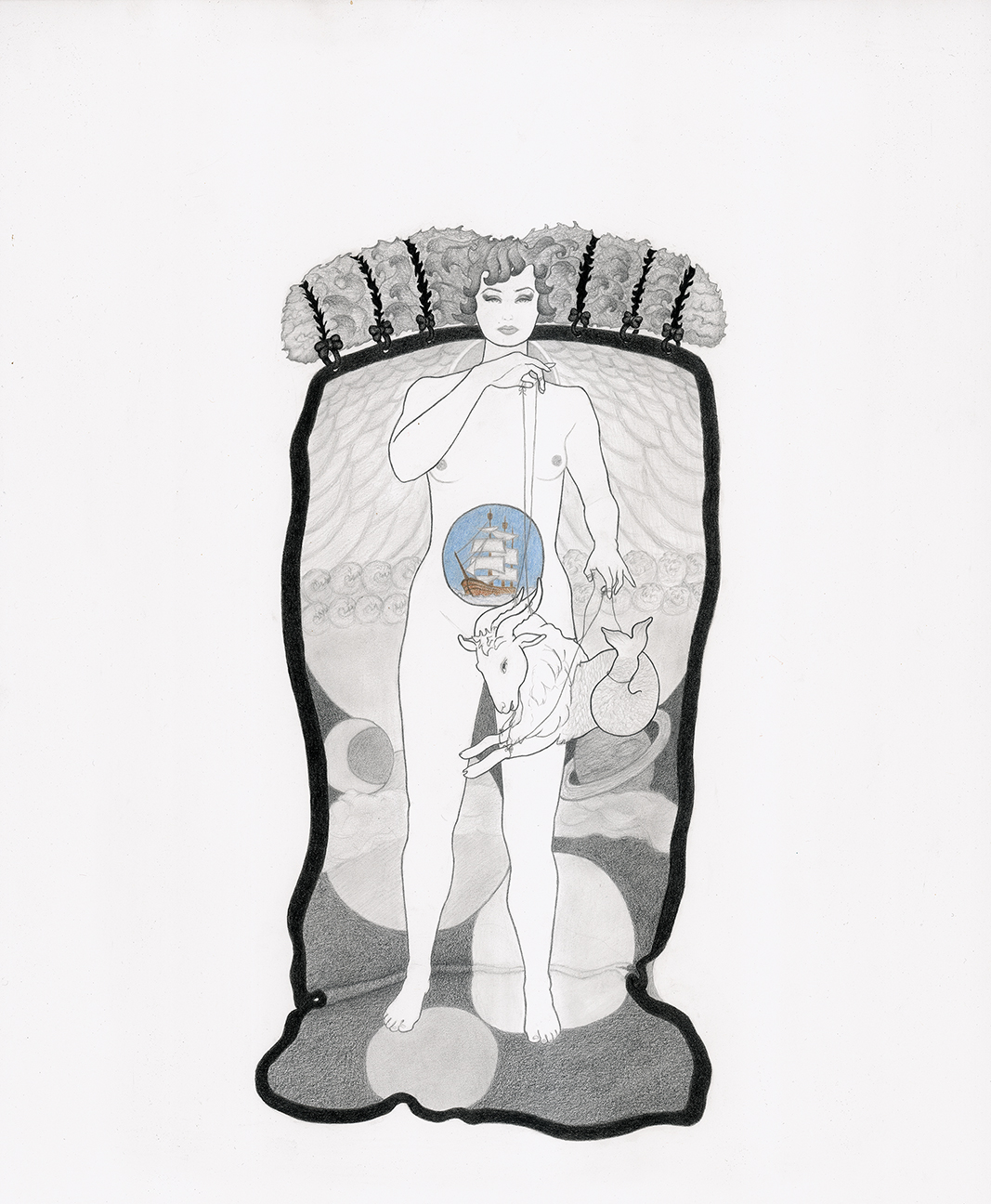 Lauren Levato, Self Portrait as Capricorn, 17" x 14", colored pencil and graphite on Bristol, 2012

There is only one other artist I can think of who has developed something analytically similar to this -- Frida Kahlo, of course. But because Kahlo and Levato both generate absolutely sincere, personal symbol-systems, their work bears next to no resemblance on the level of content or appearance.

Kahlo's work expresses in rigorous formal terms a journey that is heated and violent, that careens between sensual pleasures and agonies, nearly undone with a self-regard so intense that the work threatens to replace a life forever in the process of becoming unlivable.

Levato's journey is cool and composed; we join her at the very end of that fiery compression which transforms graphite into diamond. She cannot bear to express any image before it has completed such a metamorphosis. In the aftermath of the violence, her images occupy a fairy-tale landscape, an uncanny semiotic world -- forms, previously invisible, reveal themselves: animals and ribbons, jewelry and hair.

I called this body of work parthenogenetic because parthenogenesis is the manufacture of offspring without fertilization. In "Wunderkammer," Levato impregnates herself with herself, filling her symbol-womb with her symbol-objects. Again, the meaning of each of these objects is not really any of our business. Our business is that her work is compelling; it is airily weird; it is perfected and honest in its difficult conception and flawlessly elegant in its execution. Confronting it, our head fills with interesting thoughts, and our feet float a millimeter or two off the floor.