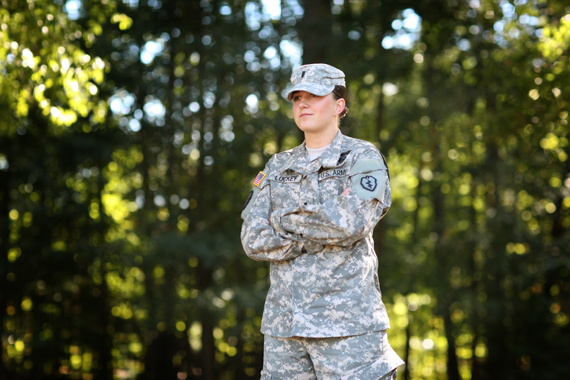 When 24-year-old Lt. Lauren Luckey was stationed in a rural village with her unit, the 2nd Battalion, 27th Infantry regiment of the U.S. Army, her Lieutenant Colonel gave her free rein to design and lead a project focused exclusively on community building and social engagement among the Afghan women. With women being the heart of a household in Afghanistan, rearing the children of the country's future, Luckey hoped to impart the influence that comes with being a woman in a position of power, a foreign concept to some.

“I wanted them to see a strong woman — [that] there is something else out there,” Luckey tells Huffington. “If you never see it you never know what’s out there. They’ve never seen a female officer before me.”

Luckey chats candidly about her experiences and goals in a way that makes it simple to understand her success in leading a Female Engagement Team in Northern Kunar in Afghanistan, bringing the women of the village into her confidence.

“At first they’re very hesitant,” she recalls of the women. “There’s this stigma if they’re seen with an American, seen talking to us, they’re going to get killed.”

Luckey worked on gaining their trust, meeting them frequently at clinics and schools to teach them about healthcare and personal hygiene. But when she saw a chance to empower them within their households, to “have something over” their husbands, Luckey did not hesitate.

Enter the unlikely characters in Luckey’s story — two ex-pro surfers from California who founded an organization called Waves For Water, which makes small water filters and delivers them to impoverished areas and at disaster relief efforts. Luckey learned of the organization when a peer was reading a surfing magazine and pointed out the ad. Soon after she contacted them, the duo traveled to Afghanistan with suitcases full of water filters.

Lt. Luckey made a point to only teach the women how to use the filters, emboldening wives and mothers to take back some control of their households with the task of providing safe drinking water for their families.

Mindful of the wary looks and the thinning crowd of women at the meeting she organized, she attempted to get the remaining women to trust her judgment.

“I said I’m going to drink this because I’m going to show you this filter works. I went to the river with one of them, and it just blew [her] mind,” she says. “I went to take that sip and in my head I was like ‘Oh God. If this thing doesn’t work, I’m going to feel pretty sick.’”

Not only did Luckey survive the sip of filtered river water, she was able to gain the trust of the village women, which helped secure their cooperation during future endeavors she planned. The women who stayed behind to learn about the filters in turn spread the word to their friends and neighbors, and the water filter plan grew throughout the community.

After getting in the good graces of the town’s governor, Luckey orchestrated a small female governmental committee to address the grievances of the women, such as the length of work days in the field or the ostracization of widows. It was the first movement of its kind in the rural, far flung Northern Kunar Province and the first time any women had even been admitted in the governor’s compound, let alone for the purpose of representing themselves.

“It was this crazy thing that happened. The governor was even shocked. He was like, ‘women don’t come here,’” Luckey says. “‘No? Well they’re going to come here today.’”

Currently stationed in Hawaii, Luckey is preparing for another tour in Afghanistan, and compiling her business school applications, as she is a year away from meeting the required four years of active duty for a commissioned officer.

Her options — and there are many — are up in the air at this point. Perhaps even literally, as Luckey is considering aviation as her next military venture, or looking into the Special Forces cultural support team, similar to her work leading the female engagement team. But business school is a definite down the line, she assures.

“I’ll be lying if I said Harvard wasn’t my number one,” Luckey says. “The worst thing anyone is ever going to say to you is no. No one is going to shoot you here.”

Which is a notion in stark contrast with daily life in Afghanistan, where Luckey hopes some positive change will come after the troops are long gone.

“I honestly think anyone could have done what I did,” she says. “I was just given the
opportunity.”

This story appears in Issue 26 of our weekly iPad magazine, Huffington, in the iTunes App store.