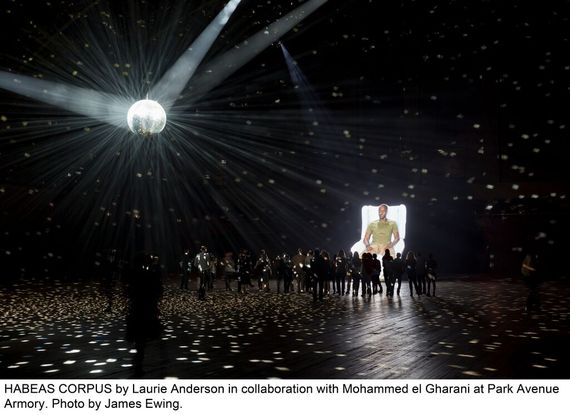 Telepresence is being used a lot more often as a way for people to engage in real time, from distant places, to project monuments that have been destroyed, convey size as a metaphor, and do powerful projections of imagery. The amazing Laurie Anderson brings it to us with a gentle thwack. Raising tired eyelids of regular New Yorker's, who are used to seeing beauty and mean together so often we avert our eyes -- just to catch a break from the dramas which surround our already intense lives. We need a little shot now and then from a creative genius to retell stories which we already know -- yet subtly distance ourselves from. Anderson makes it possible to hear the retelling, by creating the equation by which we can understand the cause and consequences of actions. Into our psyche she goes -- without the intention of making a point, as much as giving us an equalizing perspective so we can humanize people and ourselves again.

What better place to do it than the noble Park Avenue Armory? We leap forth, nearly 135 years later to the massive drill hall, (built in 1880 for the illustrious 7th regiment), to a ceiling which is flooded with projected stars like the planetarium. A striking, larger than life Mohammed el Gharani (once a 14 year old Guantanamo detainee) sits in a chair nearly as high as the Lincoln Memorial in D.C., where he reveals the story of his calamity from faraway West Africa to Park Avenue in New York City.

He sits in this chair for many hours a day with a few breaks during the run of the performance. He can see everyone in the drill hall. Crazy, isn't it? The eerie presentation overwhelms and enthralls...

But let me start from my last moments of engaging with Habeas Corpus, because it will make more sense to you. Because you will be able to put yourself in the story and it is not just America's participation in his imprisonment, but how we got to that point of folly.

In a small dark room outside the drill hall, a fireplace becomes a stage. In her rich static voice, Laurie Anderson tells us another story. Instead of being enormous, she tells it to us as a very small prerecorded projection. And as always we are entranced by her. She sits in a big chair and recalls a day with her dog, when vultures swooped around him on the beach and it seemed they were about to swallow him up. She tells us, she had never seen that look on his face or that look, period. Ah, but wait, yes she has seen it before when talking to her friends after the great leviathan of 9/11 swallowed up our innocence and thereafter everything changed. Gone forever.

Going back to Mohammed el Gharani, he can never visit the United States. His path to New York City can only be made in virtual form from 5,000 miles away. For him too, his innocence is swallowed up by vultures, who accuse him of being in cahoots with al-Qaeda while he is studying in Pakistan to better himself and ultimately help his family. Imagine, a 14 year old boy thrown into a car with a bag placed over his head, interrogated and then taken off to Guantanamo Bay, to live in isolation for the next 7 years of his life with other detainees, his brothers, as he calls them.

With his thick Middle Eastern accent, Mohammed tells many stories, of his brothers, many of whom are still there. He talks about the guards and of the family he loves and lost touch with during his imprisonment. I am transfixed by his courage and tenderness...I only wish there were subtitles on the prerecorded video that is displayed in a 3rd room, so when he untangles experiences and feelings, I can fully get it all, since I missed some of what he was trying to convey. Nevertheless I heard, saw and felt the story. Thank-you Laurie Anderson for another genius work...