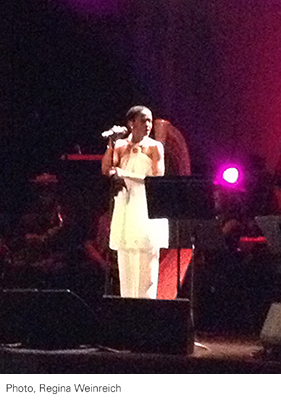 You know the old joke: how do you get to Carnegie Hall? For jazz giant Nina Simone, it took more than practice. A classical piano prodigy, Simone, nee Eunice Waymon, was denied entrance to the Curtis Institute of Music, and could not be booked in clubs even after she showed she had the chops: she was black. For one gig, she was told she had to sing; it is for her unusual gift as a vocalist that she is best known. Liz Garbus' documentary about Nina Simone: What Happened, Miss Simone? Had its New York premiere at the Apollo Theater Monday night, co-hosted by The Film Society of Lincoln Center. The Netflix movie limns this genius' difficult life: married to a man who controlled and beat her, through her political activism, her mental decline, and her final years battling bipolar disorder and breast cancer. Her performances of "I Loves You, Porgy," "I Put a Spell on You," "My Baby Just Cares for Me," and many other songs lift this film out of the usual biopic genre. Evocative archival footage, and interviews with family, friends and band mates, round out the lively portrait: you feel her vital, troubled, and singularly talented presence the whole time.

After the screening, Lauryn Hill fronted a big band singing songs from Nina Simone's songlist, starting with "Ne Me Quitte Pas." She played "Ain't Got No, I Got Life" as a rap tune. Jazmine Sullivan sang "Baltimore." These performers, along with Mary J. Blige, Usher and others are part of a Nina Simone tribute album.

D. A. Pennebaker, the legendary documentarian and wealth of information about jazz history pointed out that Nat King Cole, famous for his voice, was also an astonishing piano player.