There's hot, there's really hot, and then there's volcanic lava hot. The Earth has plenty of lava bubbling away under its surface, which makes it worth asking if we should try to tap into volcanoes as potential source of limitless, pollution-free energy.

Scientists at Seattle-based AltaRock Energy/Davenport Newberry Holdings think so, and they plan to pump millions of gallons of water into the side of the dormant Newberry Volcano about 20 miles south of Bend, Oregon in the hope that it will return to the surface as steam that can be used to drive turbines.

If you're familiar with geothermal energy, you know most existing geothermal projects rely on high-temperature permeable rock relatively near the surface that has its own naturally occurring water supply. That's all fine and dandy, but there aren't enough of those sites to have a big impact on energy production. Here in the U.S., we have lots of high temperature rock near the surface, especially in the volcanically active areas of the West, but it isn't permeable and tends to lack naturally circulating water. 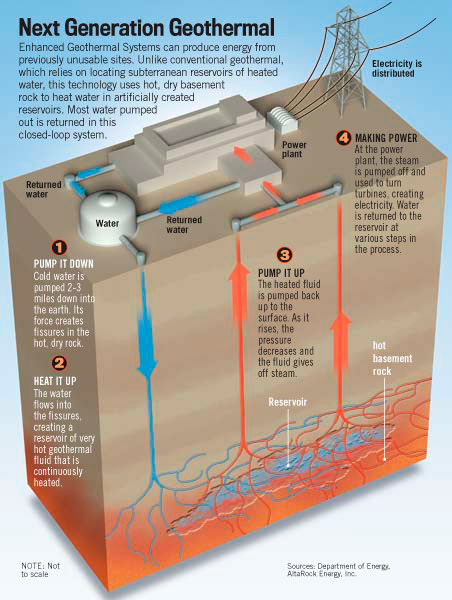 That's where Enhanced Geothermal Systems (EGS) come in. They're engineered reservoirs created to produce energy in rock where there's heat, but not water and/or permeability. Drilling deep and pumping water two miles down under significant hydraulic pressure creates a network of small, interconnected cracks in the rock that act as radiators to transfer heat to the water. The process, called "hydroshearing," sounds a lot like the oil and gas "fracking" we've all heard so much about, but it doesn't damage the environment or pose any kind of threat to the water supply. Far less pressure is applied, and no chemicals are pumped into the ground. Nothing goes into the system but water. Nearby production wells ultimately pump hot geothermal fluid under pressure to the surface. It gives off steam as the pressure is reduces, and much of the water used can be recaptured and reused in the closed loop.

In the Newberry project, engineers will pump 800 gallons of water per minute into a 10,600-foot test well (up to a total of 24 million gallons) and scientists will be observing to determine just how much water is needed to make the entire project economically viable.

Interest abounds. Investors include the U.S. Department of Energy ($21.5 million) and even Google (up to $6.3 million). The goal is to push EGS forward until it's capable of providing a significant slice of America's power supply--even if takes a while. Today, natural geothermal adds up to only about 0.3 percent of U.S. electricity production (3.8 gigawatts), but according to a 2007 MIT study, EGS could push the number up to 10 percent by 2057 at competitive prices, in great part because the latest technology includes "multi-zone stimulation" that can get more heat than ever out of a single injection well.

While plenty of questions remain to be answered (Are there earthquake risks? Where will the water come from? Will new power lines crisscross the wilderness?), it seems well worth the effort to fully explore the possibilities of such a potentially powerful energy source.