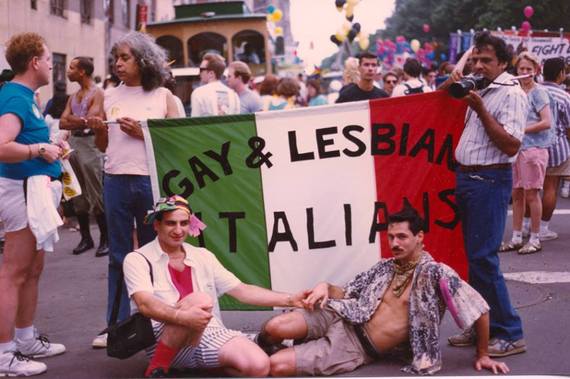 During this past October, my partner, Michael Carosone, and I were invited to give a talk at a community college in downtown Manhattan, on our experiences around being gay and Italian American, in order to celebrate National Italian American Heritage Month. I wanted to share the transcribe of my talk since it has been my agenda to bring visibility and greater acceptance of gay members of the Italian American community.

I want to first thank the professors who invited Michael and me to this lovely event. It means a great deal to both of us that we can share our personal experiences on what it means to be a Lavender Italian American. That brings me to the title of our talk, Lavenderizing Italian American Heritage Month: A Celebration of Intersecting Identities, which I hope to illuminate through a glimpse of my experiences as a gay man and an Italian American: they are three identities that have shaped my beliefs, thoughts, and values.

As a gay man in the Italian American community, it has caused me a number of hardships. It is not because of the refusal to accept myself, but being taught that my sexual identity is not acceptable to the Italian American community. Despite the rejection, my personal strength has led me on a journey of finding others who identified proudly as gay in the City of New York, one of most diverse cities in the world. Those gay youth whom I met in my teenage years were able to pull me out the throws of depression and self-hatred, and teach me about a fellow Lavender Italian American, Mr. Vito Russo, who was a gay and AIDS rights activist. Although Vito was loved by his family tremendously, his voice was silenced by the Italian American community because his identity was lavender. Identifying with the same type of marginalization within my Italian American community has prompted Michael and I to edit a collection of essays entitled Our Naked Lives: Essays from Gay Italian-American Men. In my personal essay, "My Identity is Lavender, So Am I Italian American?," I explore the constant struggles with not conforming to my ethnic community's expectations. To illustrate , I would like to read a passage, entitled Bensonhurst: Not Exactly A Gay-Friendly Neighborhood, from my essay:

The neighborhood I grew up in, Bensonhurst, was deeply conservative, so it was essential to manifest typical male behavior. Secondly, as a man of the Italian American community, gender conforming behavior always played a major role. The macho Italian American guy--the paternalist, the breadwinner, and staunch believer of the Italian American experience--made me feel uncomfortable and undesirable. I was the antithesis of this model. My natural affinity was to play with dolls, style my hair, adorn myself with female apparel, and engage in "girly" sports, like hop-scotch and jump rope. My high-pitched voice was another noticeable stigma, which people associated with gay men, compared to other Italian American boys with their deep masculine voices. The boys would call me every name in the book: fag, gay-boy, gay-lord, and girl. The girls did not think I fit in either. If they were play with me, then the boys may perceive them as weird and unlikeable. So, my few friends were the other outcasts and unpopular kids: the girl whom no one else liked, the other effeminate boy.

During my early to middle adolescence, I made a concerted effort to masculinize myself. I played "masculine" games, watched sports, and became acquainted with male friends. And if was not unusual to fantasize sexually about those male friends. But my shame continued. The few boys who I became friends with were probably gay, too, but fearful to admit, acknowledge, or analyze it. Vinnie and Anthony, both Italian American boys, were close friends of mine, who strangely seemed to have the same effeminate behaviors that I displayed. How we managed to find each other is still a mystery to me. Could it be my "Gaydar" was fully functioning at 13 years old?

After some time, it became exhausting to adhere to their expectations. My male peers and teachers forced me to engage in baseball, football, and basketball, which I adamantly refused to participant in, or was too "ill" that day. If I didn't comply, they made a mockery out of me. I hated all of them for attempting to control my behavior.

My attempts to fulfill the male gender stereotype failed, and I was regarded as, and called, a "sissy" or a "girl" (sadly reflecting their negative stereotypes of women) by people in the neighborhood and in school. My otherness made them uneasy. The pain of everyone's rejection penetrated my soul. In the short term, conformity may have been tempting, but I chose to preserve my identity.

I imagine some of you may relate to feeling like an outsider at some point in your life. Some of you may feel enormous social pressure to conform to what others expect of you. Those that expect you to alter yourself may be your own family, ethnic community, and friends. The pressure to conform may be related to meeting your basic needs. You may think it is 2014, why can't I just be me, in any color, gender, sexual identity, ethnicity, religion, that I choose. In a country that is suppose to embrace diversity--instead, it makes you feel like the "other." But the message that I hope to leave you with, is knowing that you're not alone in your battle for acceptance. Your identities have meaning. You make the meaning out of them by wearing them proudly in the way you talk, behave, believe, interact, and exchange information. You may not be Lavender, but certainly possess a number of your own colors. In the end, what ultimately matters is the relationships that you form with those who embrace all of you.