There has been a din of voices -- many of them cisgender -- weighing in on Caitlyn Jenner’s Vanity Fair reveal. The majority of commentary has been support and praise. Aside from the usual string of transphobic comments from Internet trolls, most reactions have been positive, revolving around Jenner’s bravery, beauty and “realness” -- concepts that the cis mainstream often clings to when embracing trans women. So when Laverne Cox posted a Tumblr blog yesterday celebrating Jenner, but also unpacking the politics of beauty surrounding Jenner's warm reception, it was an interesting moment to gain real perspective from a trans woman.

“Yes, Caitlyn looks amazing and is beautiful,” Cox wrote, “But what I think is most beautiful about her is her heart and soul.” 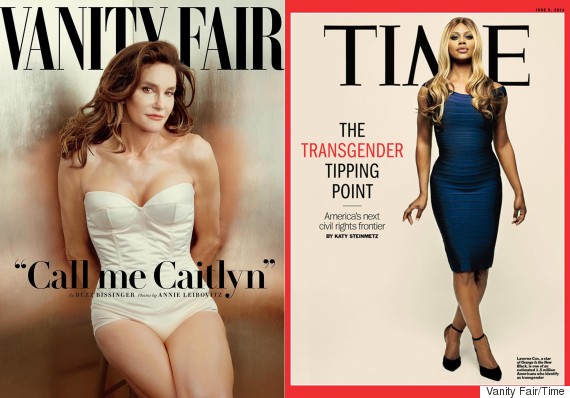 Cox argued that the emphasis on trans women's beauty can be dangerous, writing, "There are many trans folks because of genetics and/or lack of material access who will never be able to embody [cisnormative beauty standards]...we should be seen as ourselves and respected as ourselves."

What is perhaps most interesting about Cox’s commentary, is how just beneath the surface it seems to address (and maybe even critique) the parallels and differences between her own journey and Jenner’s.

“I have always been aware that I can never represent all trans people,” Cox writes, a sentiment she’s expressed before to address the criticism she's received surrounding her celebrity.

Cox has an enthusiastic following, but she’s been called out in the past for being a "bad" feminist or a "bad" trans activist. In 2010, She got flack for allegedly perpetuating patriarchal ideals of womanhood on the reality series “TRANSform Me,” where she and two other trans women instilled cis women with confidence via feminizing makeovers that included getting rid of “boy clothes that women should not wear.”

In April, she appeared nude in Allure magazine, and the photo shoot was both praised as an empowering moment for trans women of color, and drew ire from feminist critics, most notably the blog feministcurrent. Blogger Meghan Murphy wrote: “So we are to believe that...achieving a 'perfect' body, as defined by a patriarchal/porn culture, through plastic surgery, then presenting it as a sexualized object for public consumption equates to 'radical self-acceptance?”

At her talk at The New School last October with bell hooks, the feminist author praised Cox as a “goddess for justice,” but in the same breath accused her of conforming to Eurocentric and patriarchal ideals of beauty with her high heels, designer dresses and signature blonde wigs.

Jenner, on the other hand, has not received nearly as much criticism about her traditionally feminine appearance. Some have suggested that there’s a double standard in the way Jenner has been accepted vs. how Cox has been, that as a white woman Jenner has been afforded less scrutiny and more accolades, and that her cover photo (as Marc Lamont Hill put it on Twitter) has “smuggled in the same old cis/Eurocentric narratives about womanhood.”

Of course, the overwhelmingly positive reaction to Jenner's transition is ultimately a good thing, and it makes sense. She’s older, she was once a beloved Olympian who represented the epitome of hypermasculinity, and has been a reality TV star connected to one of the most talked-about families in America for the last nine years.

But whether intentional or not, the image of Cox’s Time magazine cover beside Jenner’s Vanity Fair cover, speaks volumes. The timing of Cox's blog post, and its simultaneously celebratory and critical tone, sparks questions about how the narratives of visible trans women are constructed. The Jenner buzz has a lot to do with celebrity culture and the current conversation around trans people, but it also brings up questions about race and privilege that have yet to be addressed in a meaningful way.

And yet, it’s difficult to know where and when it’s right to leverage these kinds of critiques. Did Cox’s essay detract from Jenner’s history-making moment? As it critiqued the beauty-conscious culture that informed support for Jenner, was it also critiquing her glamorous look? It’s hard to say.

Defending herself last year against bell hooks’ accusations that her feminism is compromised by her highly feminine presentation, Cox said: “This is where I feel empowered, ironically, and comfortable. I think it’s important to note that not all trans women are embracing this, but this trans woman does. And this trans woman feels empowered by this.”

Jenner’s Vanity Fair cover, similarly, is an empowering moment -- even as we complicate its implications. That, perhaps, is the biggest takeaway from Cox’s essay. The expectations put on the current group of visible and successful trans women, both white and WOC, are becoming increasingly unrealistic.

Why is it the responsibility of trans women, as they knock down doors, to also subvert gender norms, to smash the patriarchy, and to defy deep-seated standards of beauty? It isn’t, and it shouldn’t be. Cox, Jenner, and all trans women should have the freedom and the agency to make their own decisions, and to walk in their own truths. There’s a larger conversation to be had, of course, about what Jenner’s Vanity Fair spread means going forward: how it will trickle down to less privileged and visible trans people, and if it will in fact effect political change. Caitlyn Jenner has cited Laverne Cox as an inspiration to her, and in spite of everything, there's a power in that. Today, Jenner has not only graced the cover of a respected mainstream magazine and garnered the support of millions of people. Finally, she is being seen, and heard, on her own terms.