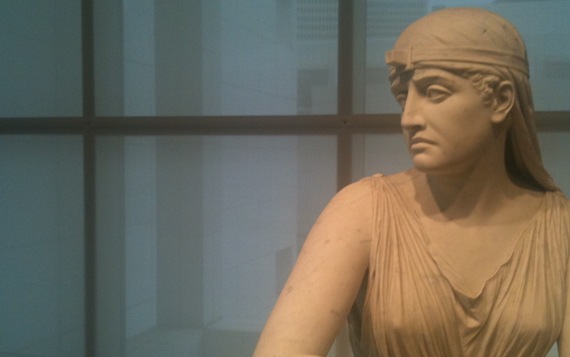 (Yes, it's the same picture as in last week's post - but I like the tefillin (phylacteries) on William Wetmore Story's female depiction of Jerusalem in connection with my theme this week. So here, again, is my photo of the sculpture, snapped at Atlanta's High Museum of Art.)

Some twenty years ago, I made an off-the-cuff quip that has stayed with me as a central part of my thinking, and even my theology.

At a Sabbath dinner on the Upper West Side of Manhattan, I was asked, for the umpteenth time, a question that was, in those years, perennial among rabbinical students at the Jewish Theological Seminary of America and their fellow travelers. It was a question almost always asked with a characteristic mix of angst and hope - as though someone, somewhere, surely, must have had the be-all-end-all answer, and also as though there might be no satisfactory response:

"So, how do you justify your egalitarianism?"

To clarify the meaning of the query for those whom it may never have vexed - the question was: how, in view of centuries of exemptions, amounting to exclusions and even prohibitions, regarding women and the performance of various ritual and liturgical duties in Judaism, could I advocate equality of the sexes in the synagogue?

In the moment, at that particular dinner, as it happened, I was tired of answering the question. In fact, I was deeply tired of the question itself, tired of its being a question; and so I came back, impromptu, with: "Halakha le-Miryam mi-Yam Suf."

To translate literally, I was saying that my commitment to gender equality in Judaism was "Law of Miriam from the Sea of Reeds."

I did not mean, as one might imagine, that we should derive gender-balanced Jewish practice from scripture telling us that, just as Moses led the "sons of Israel" (to translate that term literally) in the Song after the crossing of the Reed Sea, Moses' sister, Miriam the Prophetess, led the women in drumming and dancing, and also instructed them, "Sing to the Eternal One who has triumphed greatly!" (Exodus 15:21)

What I did mean, and what I was doing (for a table full of text-studying types, to whom the allusion would instantly be clear) was echoing and giving a twist to an occasional dictum from rabbinic literature: "Halakha le-Moshe mi-Sinai" - "Law of Moses from Sinai."

That phrase appears when the roots of a commonplace custom are lost in the mists of time. In such an instance - when no specific scripture and no ages-old rabbinic argument is the known source for a seemingly eternal and universal way of doing things - a sage may say that the practice is "halakha" (literally, "the way one walks," the rabbinic term for Jewish law) "le-Moshe mi-Sinai" - as inherited, in an unbroken chain of transmission, from unwritten instruction given by God to Moses on Mount Sinai along with the revelation of the written Torah.

Why are phylacteries black? Why are there eighteen specific blemishes that render an otherwise acceptable animal not kosher? Why, of all the four plant species featured on the holiday, does the congregation walk around and around the sanctuary with the willow branches alone at the conclusion of the Sukkot festival? Why? Who knows? Halakha le-Moshe mi-Sinai. These customs are - or they might as well be - law straight from Moses at Sinai. It's an 'it-is-because-it-is-and-that's-how-we-know-that-it-is'-kind of answer.

That is what I was saying in response to "How do you justify your egalitarianism?" The answer, for me, had to come from a place beyond casuistic, painstaking, textual arguments. Something so fundamental had to originate somewhere deeper and stronger than a cajoled line-up of male-authored rabbinic legalisms forced grudgingly to yield a present-day result over and against much we can discern about their authors' Late Antique and Medieval views. I have friends who are masterful at constructing those sorts of answers - and, as a scholar of rabbinic text and a teacher of rabbinic law, I understand the conviction that it is the only legitimate mastery, the only way to derive and produce Jewish practice.

The thing is, though, that it isn't. And let me give an example of how it isn't - from a Medieval Jewish law-code, no less. Writing in the fourteenth century, in his magisterial opus that eventually becomes the groundwork for the authoritative Shulchan Arukh (the sixteenth century summary of Jewish law that, with various glossa, holds sway in Jewish orthodoxy to this day), Rabbi Yaakov ben Asher observes how women, in place of the customary, male, morning blessing of God "who has not made me a woman" are accustomed to bless God, "who has made me according to His will." He goes on to say, "It seems to me that they do this in the manner of a person who justifies an ill divine decree against him." Take or leave Rabbi Yaakov ben Asher's supposition that women acknowledge God for creating them female in the way (as he puts it) of a tzidduk ha-din, the formal acknowledgement of God's inscrutable justice recited at a funeral or in the wake of a calamity - the point is he doesn't know why the women do what they do. But he encodes it in his law-book just the same.

Women have been making Jewish praxis from time out of mind, no matter whether the men have bothered to ask them about it.

I have male friends who have gone off to Israel, to halls of Jewish learning closed to women, to gain ordination from the Chief Rabbinate there, in order to be able to come back and give religious sanction to equality for women in Jewish practice. With respect and lots of fondness, I have to say - who asked them? Certainly not the trail-blazing women who staked their own lives on paths of rabbinic leadership.

When she was transported from Theresienstadt to Auschwitz, the diabolically meticulous Nazis recorded the name and profession of Regina Jonas, the first female rabbi of the modern age, ordained in 1935, along with the names and professions of all the other prisoners loaded onto the boxcars that day. The manifest survives, and it reads, "9690-I/77. Jonas, Regina - Female Rabbi." Halakha le-Miryam mi-Yam Suf - Law of Miriam from the Sea of Reeds. Yes, Jonas did write a whole treatise on the ordination of women - but, ultimately, as her life attests, it is because it is. In this case, that is all I need to know.