An ongoing criticism of Public Service Loan Forgiveness (one made, for example, by Jason Delisle at the New America Foundation) is that the possibility of earning forgiveness in 10 years makes graduate and professional students willing to borrow more money, and that this reduced price sensitivity allows colleges and universities to charge higher tuition. At least in the legal field, there's no evidence of that.

Below is a graph of average percentage increase in tuition for private law schools from 1985 to 2013 based on data from the American Bar Association. The blue circle is 2007 - the date of passage of the College Cost Reduction and Access Act of 2007 (CCRAA), which is when Public Service Loan Forgiveness went into effect. Overall, the six years since passage of the CCRAA has continued a long-term trend of reduced increases in tuition. 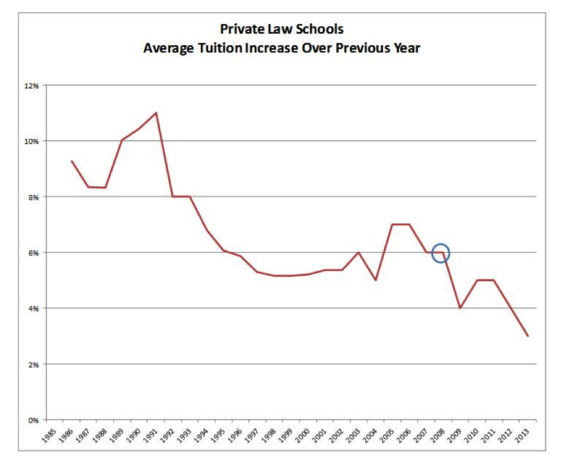 This trend appears to reflect a rational response to market pressures. The number of applicants to law schools declined from the 2004-05 academic year through 2008-09. They rose slightly in 2009-10, bringing with it a slightly larger tuition increase, as the job market crashed across professions and many people took the opportunity presented by educational "safe havens."

If there was ever a time for "savvy" law schools to utilize loan forgiveness as a means to continue to raise tuition at well above the rate of inflation, this would have been it. There's no evidence they've been able to do so. Instead, since 2007, it seems law schools overall have been responding to decreasing demand by reducing tuition increases. A few have already responded by dramatically cutting tuition.

And what about all these borrowers with reduced price sensitivity? The evidence indicates law school applicants are in fact very price sensitive. Over the last three years, applications have declined precipitously, almost certainly because law school tuition remains too high given the historically weak legal job market.

Nor does it appear that law school graduates are seeking out public service work simply to gain forgiveness. NALP's Jobs & JDs report for the class of 2013 notes that government and public interest employment has remained relatively steady over the last 10 years. A slight uptick in the latter since 2011 is largely the result of an increased number of law school funded positions, many of them short-term.

The overall consensus in the legal field is that law schools are in the midst of a massive market correction in which some of them may go out of business. Public Service Loan Forgiveness is an invaluable tool for retaining lawyers for long-term public interest careers and closing the justice gap. It is not the cause of high law school tuition and it is not making law students willing to borrow more.

Let us know what you think in the comments: what is your forecast for law school tuition?