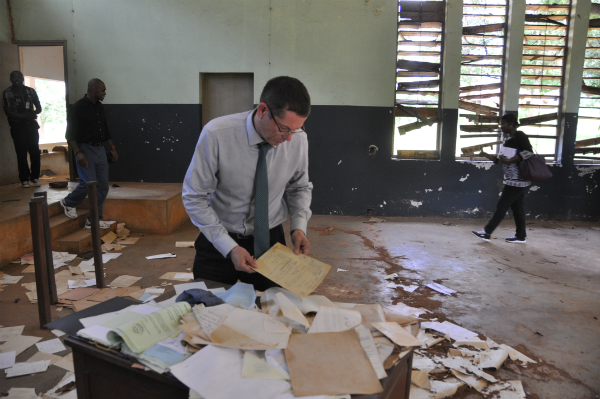 The courtroom in Bambari town has broken doors and no windows. The top of the judges' bench, tables and chairs are all gone -- looted. The floors are strewn with papers -- the remnants of archives and civil registries. I picked up a couple of loose pages; some documents dated back to colonial times.

The justice system in the Central African Republic today looks exactly like this courtroom. Outside the capital, Bangui, there are no police, no prosecutors or judges, but Séléka coalition forces, who took control of the country in March, are everywhere. They receive no salary; instead they set up checkpoints or go to the market and to extort money, or loot houses.

But they do not just loot. In Bambari hospital, I met a number of their victims. Eighteen-year-old Martine was four months pregnant when she was raped and had a miscarriage. Solange, a widow and mother of five, was raped as she sold coffee by the road. Annette was shot in the arm because she would not let go of the little money she had earned at the market. Many have been killed, but no one knows the exact numbers. I visited the site of a suspected mass grave that still has to be investigated. Local inhabitants agree that victims were summarily executed but it is not clear whether the perpetrators belong to deposed President Bozizé's forces or the Séléka forces.

Poor governance, corruption, neglect of the north and discrimination against its mostly Muslim tribes, marked Bozizé's regime. So when northerners, supported by fighters from Chad and Sudan overran the rest of the Central African Republic, including Bangui, there was little resistance. Bozizé's troops were committing crimes, arbitrarily detaining, torturing and summarily executing alleged Séléka supporters. When Séléka took over, violence and destruction reached unprecedented levels in a country already scarred by decades of instability and fighting.

Afraid of being killed or raped, many people are still hiding in the bush. Rapidly spreading malaria and other diseases, high maternal mortality and malnutrition are likely to kill many more people than the conflict-related violence. In some areas, less than 20 percent of the usual seeds have been planted and severe food shortages can be expected from early 2014.

Security in the capital Bangui has improved in recent months. As the result of the intervention by the Economic Community of Central African States (ECCAS), the African Union and the wider international community, a relatively inclusive transitional government has been established. Yet, it is very weak and has little influence outside the capital. Public schools have remained closed since December 2012 and less than one in five medical facilities are operational.

If security does not improve, teachers and doctors who have taken refuge in the capital will not return to school and clinics; more than 650,000 children will lose another year of school; another crop will be lost; and more people will be raped or killed. The religious and ethnic divide will deepen, triggering the risk of a full-scale civil war, which would destabilize the wider region. Many victims increasingly believe that they are targeted for being Christians; I heard some say: "Muslims are fewer than 15 percent in this country, and we will pay them back."

Unfortunately, the crisis remains largely off the radar of the media and the international community; the Central African Republic does not have Syria's six-digit number of victims or Mali's proximity to Europe.

In this lawless heart of Africa, an area larger than France and Belgium combined, the Lord's Resistance Army has found safe haven in the Central African Republic to operate and recruit. Chadian and Darfur rebels as well as Islamist extremists coming from Mali, Nigeria and Somalia may soon follow. But, who can provide security? Former police and gendarmerie officers cannot return because of their former enemies, the Séléka, mistrust them. And the Séléka forces cannot provide security because the population mistrusts them.

Integration, joint training and deployment of a limited number of elements of both former security forces and the Séléka may be a viable solution. They must however be screened to exclude perpetrators of human rights violations. The others should be disarmed and demobilized, repatriated or reintegrated. However, this will take time and requires strong international support at political and financial level.

Regional African troops under the ECCAS mission MICOPAX in CAR, currently 1,300-strong, are too few in number to stabilize the situation. The local population also does not trust troops from some neighboring countries. Regional troops must be urgently reinforced by a larger and more diversified international force under United Nations umbrella. Such a deployment will help to provide security, protect civilians and create favorable conditions for free and fair elections within 18 months as envisaged under the Libreville Agreements.

To heal the scars of war and achieve reconciliation will take longer than repairing the courtroom in Bambari. But a functional courtroom is an important pillar of a better future: after security, the rule of law, transitional justice and accountability for crimes committed by both sides in the conflict should be the next priority.