When House Majority Leader John Boehner suspended legislative activity in the House of Representatives following the mass murder in Tucson, Ariz., it was a laudable and thoughtful move. He had previously offered that, "An attack on one who serves is an attack on all who serve," and by calling for a legislative pause, he reinforced a moment that called for comity. Potentially tendentious legislative debates could wait a week, as legislators took some time to soothe their frayed psyches and show support for their fallen colleague. But there's been one practical benefit of the break, and that's the fact that no one is moving forward with legislation that's primarily founded in the fact that everyone is freaking right the hell out.

It may, and probably should, come to pass that the events of the past week will result in a thoughtful examination of the incident, leading to the patient and methodical crafting of sensible policy that might help to prevent such incidents in the future. And it might be a difficult road to tread -- sometimes there's just nothing you can do to fix something, no matter how hard you want to. But a slow and thoughtful process that goes nowhere is infinitely preferable to rushing to pass the first crazy law that you barfed out of your brainpan while stewing in a broth of worry, adrenaline, and panic.

And believe me, I can sympathize with what many of these legislators are enduring. When something breaks in my life, I want to fix it immediately. And I'm just the type of person who'll forgo the perfect, sensible solution that takes 72 hours to enact in favor of some half-assed plan that took me 15 minutes to come up with in a wild flail of nerves.

Dave Weigel, noting that "[a]fter some tragedies, there have been instant surges of support for legislation sold as preventative," reports Thursday that a grand debate over the Tucson shootings has nevertheless failed to coalesce. "Some members tactfully explained that discussion like this could wait for another day," he relates, adding, "Others reacted to the question as if they'd been asked whether there should be stiffer regulations on what kind of shoes dragons are allowed to wear." Overall, his take on the matter makes it hard to believe that something significant might get enacted. But that doesn't mean there aren't people who don't want to get something well-intended-but-plainly-stupid passed! Let's run those down:

Peter King: 1,000 Foot Gun-Free Halo For Lawmakers.
Why It's Well Intended: Because no one wants to see lawmakers shot with guns.
Why It's Stupid: In a world where elite lawmakers accuse other elite lawmakers of elitism from their elite perches at elite legislative bodies and elite think tanks, should we pass a law giving them all the right to a 1,000 foot halo where none may carry a gun? Jon Stewart asks the pertinent question: "Can the rest of us get one of those thousand foot gun free perimeters?" Let's not forget: Many of the people impacted by Jared Lee Loughner's killing spree were us common folk.

The other question Stewart asks is "How is that supposed to work, exactly?" I mean, it's a neat law! It reminds me of that time Congress wanted to pass a law that made it illegal to be a terrorist and be in America. You think: "Wow. Game change! I bet those murderers never counted on doing that!" The law seems unenforceable. It also seems like a law-abiding citizen could find himself accidentally ensnared in King's 1,000 foot dragnet zone. Besides, don't some lawmakers enjoy coming within 1,000 feet of other people with guns? Ben Domenech makes perfect sense:

Conservative politicians routinely participate in hunting and gun range activities -- I've gone shooting with a number of Governors and Senators -- and the idea that people in their vicinity and beyond (1,000 feet is quite a ways) could be arrested simply for legally possessing a firearm is incredibly silly and a recipe for all sorts of violations of this law.

Schools, airports, and government buildings where restrictions apply on gun possession are all set in a single place -- they aren't roving locations where the Second Amendment does not apply. In contrast, King's law would create bubbles of illegality around politicians themselves! What would happen when a Texas Congressman attends a county fair? You'd have to arrest the attendees from the Ferris Wheel all the way to the Cotton Candy stand.

Side note: it's already quite illegal to kill a Congressperson with a gun.

Bob Brady: Everyone Has To Stop Using Violent Words.
Why It's Well Intended: Because people would like to have a healthier discourse that's not about tyranny and the need to murder people because they have differences on marginal tax rates and stuff.
Why It's Stupid: Civility, I'm afraid, is just not going to be achieved by legislative fiat. And since Brady specifically cites "bull's eyes or crosshairs" as something he'd regulate, this call for civility seems to have a creeping incivility at its core. You might as well call this bill the "I Don't Think We've Sufficiently Stuck It To Sarah Palin Act of 2010."

I think that just about every reasonable person would welcome it if our lawmakers chose to elevate their level of discourse and put some distance between themselves and these bad days of hyper-hyperbolic rhetoric. But even if everyone's on their best behavior, you're still going to have party strategists' "target" districts, and opponents in a debate will continue to "take shots" and "fire back." Besides, if you think that it's impossible for a political figure to take an imaginary insult and get the media to treat it as if something despicable has happened in the discourse: think again.

But, the operative word here is "choose." We live in a nation where free people make free choices about the way they use their free speech, and we're the better for it. I'll reiterate my offer: if any political figure wants help in getting shot of the war/guns/battle metaphors in favor of images that more positively depict your toughness and commitment, hit me up and I'll help. But I don't make that offer to stifle speech, I make it to expand it.

If we have to take some sort of non-binding Pledge To Do Better, why not try out Greg Sargent's 9 point "Truce between the right and left," which he offers up today? Really, these days I'd be happy if we all just agreed to offer to jumpstart each other's cars, regardless of what political stickers are on the bumper. I mean, that would be a great place to start getting along again.

Given the fact that this tragedy is now at the forefront in our minds, colliding with our misgivings about the political discourse, it's fair for us to go forward and make our own judgments about what people do and say. We can give extra points to the political figures who elevate their game and demerits to those who don't. But let's let them make their own choices. Some people prefer that things be left unspoken, but I'd rather everything be out in the open. Besides, I'd rather catch the scent of a madman a mile away, than find out only after they get the power to compel soldiers to carry out their psychosis.

Louis Gohmert: Let's let lawmakers carry guns inside the Capitol!
Why It's Well Intended: I guess the idea is that people would be deterred from gun crime against legislators if they thought their legislators were strapped?
Why It's Stupid: You know, there are nations on this Earth where people like Louis Gohmert would routinely lose elections to balloon animals. But in Texas, where Gohmert's from, it's legal to just straight up stroll around the halls of power carrying your Glock. So he'd like to bring that practice to the Capitol.

Part of what Gohmert wants to do is provide a measure of self-protection to lawmakers who walk home through a thicket of ambush journalists, who would probably back down at the sight of a gun. But Gohmert wants these gun allowances extended to the floor of the House of Representatives. This seems to me to be a bad idea! I mean, these are the legislators who abuse Twitter on the House floor. For that reason alone, maybe take some baby steps before we give them guns, too. (Also, there is the whole "poisoned political discourse" thing!)

James Clyburn: Let's bring back the Fairness Doctrine!
Why It's Well Intended: Don't really know. People like "fairness," I guess? Also, radio in D.C. has been complete crap since WHFS went off the air.
Why It's Stupid: Oh, lord. The fairness doctrine. Imposed in 1949, the Fairness Doctrine mandated that the scarcity of media resources made it necessary that FCC license holders allow competing points of view to have equal time and access. In practice, the Fairness Doctrine was always tricky to enforce, and so in 1987 it was done away with. Just about no one has been less interested in bringing back the Fairness Doctrine than President Obama and FCC Chair Julius Genachowski, but that hasn't stopped the right from manufacturing some utterly fake, paranoid firestorms about the White House forcing Rush Limbaugh to give equal time to Keith Olbermann on all the radios, or something.

Clyburn, in reopening this can of worms, is only going to add fuel to that paranoia, and from there, what do you get? More crazy fear-mongering! And if you believe that fear-mongering leads to more violence, well, then, you see where this chain of logic leads, don't you? And all for a policy that hasn't been in place for decades, and which wouldn't have impacted the actions of Jared Lee Loughner in any meaningful way.

Do we have anything on offer that actually makes a lick of sense? I'd direct your attention to Rep. Carolyn McCarthy's bill to ban the high-capacity clip that Loughner used. I'm typically loathe to target law-abiding citizens in a lowest-common denominator hunt for problem solving -- gun owners and New York City Muslims alike -- but McCarthy has successfully advanced sensible gun control measures along bipartisan lines before, and there's nothing to suggest that any lawful activity you can currently perform with a gun would be diminished for the want of a high-capacity clip.

Via Josh Harkinson at Mother Jones, here's a chart that chronicles the way high-capacity clips have been used in mass-murder incidents, dating back to 1989: 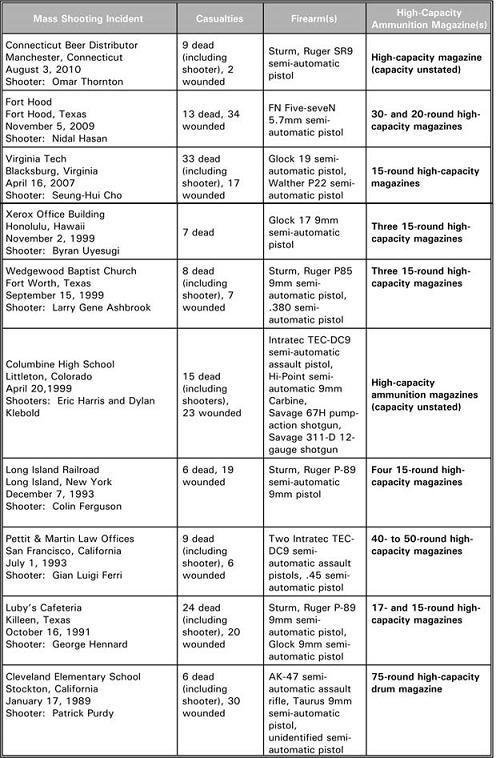 Will Wilkinson and I probably part ways on the matter of considering a ban on extended magazines, but I see a lot of wisdom, nonetheless, in his "case for doing nothing":

We may badly want to do something, but we will be better off in the end if we hug our jerking knees and find our cool. The ordinary operation of the criminal-justice system is enough for now. If you've got to do something, why not tell a pundit or politician yammering on about background checks or forced institutionalisation to please shut up, since it's just too soon for reason to prevail.

Act in haste, repent in a swamp of stupid, unenforceable laws that bring a ton of unintended consequences.