Recent events in the Gulf of Mexico have a lot of people talking about how a line needs to be drawn in the sand, when it comes to the oversight of environmentally dangerous operations conducted by large corporations that are funneling millions of dollars, both directly, through leasing revenues, and indirectly, through campaign contributions, into the very government agencies that are supposed to be overseeing them. While folks like us are busy talking about it, the people at Defenders of Wildlife and the Southern Environmental Law Center are doing something. 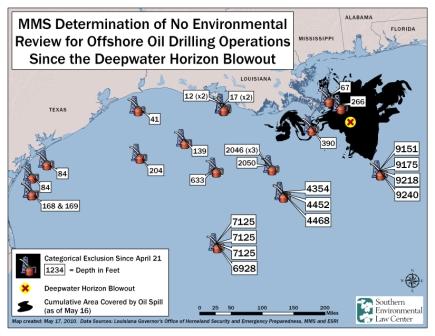 The two groups jointly filed suit in Alabama yesterday against the Minerals Management Service (MMS), a bureau within the Department of the Interior that is responsible for both issuing natural gas, oil and other mineral resource permits, and also for collecting royalty fees. The lawsuit cites the MMS for its "complicity in the Gulf oil disaster and continued lax oversight of oil drilling operations, including its failure to require a thorough examination of spill risks from exploratory drilling operations like the Deepwater Horizon. The legal filing seeks to prohibit the MMS from continuing to exempt from environmental review new exploratory drilling operations in the Gulf of Mexico."

The two groups are particularly concerned with the question of "categorical exclusions" which have been extended with no explanation to twenty additional deep water drilling projects even as the oil continues to spew from a broken pipe in the wreckage of the Deepwater Horizon (see map courtesy of the Southern Environmental Law Center). A number of the projects in questions are at depths of 9,000 feet, nearly twice that of the current spill, which would be that much harder to deal with in the event of a leak. A categorical exclusion is a legal term. What it essentially means is "drill baby drill." It basically provides these projects with a waiver from environmental review and essentially just rubber stamps them, based on the assumption that "they do not, individually or cumulatively have a significant effect on the human environment." The lawsuit also seeks to revoke these permits.

According to the press release:

The MMS 2004 guidance creating a categorical exclusion for exploratory drilling operations in the Gulf of Mexico made clear that the exclusion should not apply to proposed operations in certain areas, including in 'relatively untested deep water.' Yet, MMS granted Deepwater Horizon a categorical exclusion from environmental review despite the fact that the exploratory drilling was to take place in almost 5,000 feet of water.

Interior Secretary Ken Salazar pre-emptively announced yesterday that the government will be tightening regulations for onshore oil and gas drilling amidst criticism that his agency had become too cozy with the oil companies it was supposed to be monitoring. The new regulations however, will not apply to offshore operations.

The secretary also stated last week that the Minerals Management Service would be reorganized, such that the people doing the oversight would not be the same people collecting the revenues, thus removing the obvious and unconscionable conflict of interest. The Department claims that they want Congress to revise the review period from the current thirty days to ninety, to provide time for a more complete review, although according to Kierán Suckling, executive director of the Tucson, Arizona-based Center for Biological Diversity, in practice today they are completing the reviews in twenty-four hours. Suckling went on to say:

It is inconceivable that MMS could look out its window at what is likely the worst oil spill in American history, then rubber stamp new BP drilling permits based on BP's patently false statements that an oil spill cannot occur and would not be dangerous if it did.

A separate action in Texas by Kenneth Abbott, a former BP subcontractor, and Food & Water Watch seeks to shut down BP's Atlantis platform, standing in over 7,000 feet of water, which has operated with incomplete and inaccurate engineering documents.

Abbot claims he was let go after voicing his concerns about safety. He also said his warnings were ignored by government officials as well. The lawsuit claims that a blowout on the Atlantis would be far worse than the Deepwater Horizon. An attorney for the plaintiff wrote, "In two days, a blowout from the BP Atlantis would spill more oil than the Exxon Valdez."

There are two reasons why this extremely dangerous behavior has been going on unchecked. First is because of the tremendous amount of money changing hands between the parties in question. And the second is the implicit assumption that the American people can't really complain too much because they know that they need to get their oil from somewhere. A drug addict does not want to see his dealer busted.

The time has come for this to stop. These lawsuits are a good first step in addressing the first problem. They will coerce the government to do what is intended to do, which is to balance the interests of business with the public interest. When the interests of business become a threat to our national security, as they clearly have in the Gulf of Mexico, it's time for the government to do its job.

As for the second reason, that's up to all of us, with the cooperation of business and government to begin doing everything we can to drastically reduce our oil consumption today.

RP Siegel is the co-author of Vapor Trails, a story set in New Orleans about an oil spill and the system that caused it.