For public colleges and universities, First Amendment compliance isn't optional. It's a binding legal obligation. And when legal obligations are ignored, lawsuits are necessary--a lesson ten institutions learned the hard way this past year.

Far too many of our nation's public institutions still impose flatly unconstitutional restrictions on student and faculty speech. The latest research from the Foundation for Individual Rights in Education (FIRE), the civil liberties watchdog group I work for, found that 54 percent of public colleges and universities maintain speech codes that violate the First Amendment. That's a significant drop from the 79 percent recorded in 2007, but it's still far too many.

This flagrant disrespect for free speech baffles me and my colleagues. After all, the law couldn't be clearer: Courts have struck down campus speech codes for more than 25 years. And public colleges routinely proclaim their love of freedom of expression in promotional materials and presidential statements.

So why not simply allow students and faculty to speak their minds? We just don't get it -- and we're tired of waiting for an answer.

Last July, in an effort to eradicate speech codes once and for all, we launched our Stand Up For Speech Litigation Project. FIRE pledged to file challenge after challenge to unconstitutional restrictions on campus speech, targeting colleges in every federal circuit. When one suit ends, another will be filed.

Since Stand Up For Speech began one year ago, we've coordinated 10 First Amendment lawsuits challenging speech codes at 10 different institutions. Of the five lawsuits that have concluded, the students we assisted have won settlements in each. These victories have secured over $270,000 in settlements and policy changes restoring the free speech rights of more than 150,000 students in California, Hawaii, Michigan, and Ohio.

And in the five suits that are ongoing -- including the most recent, student Nicole Sanders' lawsuit against Blinn College in Texas, filed in May -- we're optimistic about our plaintiffs' chances. Two of the institutions facing Stand Up For Speech suits (Dixie State University in Utah and California State Polytechnic University, Pomona) have suspended the challenged policies while litigation is ongoing and settlement talks proceed.

We've long thought that colleges would decline to defend their speech codes in court, if challenged. A year later, our suspicions have been confirmed. Only two institutions have opted not to settle: Chicago State University, already rocked by high-profile legal scandals in recent years, and Iowa State University, fighting to preserve its ability to silence student organizations like the National Organization for the Reform of Marijuana Laws, our plaintiffs in that case.

It's been a successful year, but our work is far from complete. After the summer, students nationwide will return to campuses that restrict their right to free expression. Unfortunately, we are not hurting for potential lawsuit targets.

How can public colleges avoid embarrassing and expensive lawsuits? Easy: Make sure institutional policies comply with the First Amendment. That sounds simple, because it is. Bringing campus policies in line with constitutional guarantees of free expression doesn't have to be difficult. It's largely common sense.

For example, it's unlawful to quarantine student expression to tiny, remote "free speech zones." Prior to FIRE's legal challenge, the University of Hawaii at Hilo relegated students like Merritt Bunch and Anthony Vizzone, who wanted to protest the National Security Agency's domestic spying, to a muddy free speech zone that comprised roughly 0.26 percent of the school's total campus acreage. After the suit, the University of Hawaii system quickly realized its error and scrapped its free speech zones systemwide.

Vague, broad harassment policies are also unlawful. Before student Isaac Smith, a member of Ohio University student organization Students Defending Students, challenged his institution's speech code, he and his peers could be punished for speech that "degrade[d], demean[ed], or disgrace[d]" someone. This subjective, limitless standard could censor heated classroom debate, dorm room discussion, a comedy routine, or a t-shirt. Ohio University revised its policy as a condition of settlement.

It shouldn't take legal action to guarantee free speech on campus. But this past year proves that sometimes, a lawsuit is necessary to vindicate student and faculty First Amendment rights. 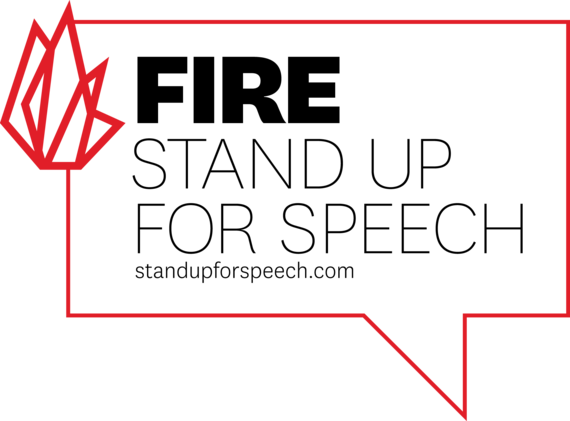