A lawyer in California has submitted a ballot initiative with the state Department of Justice calling for the death of anyone who engages in sodomy in the state, the San Diego Gay & Lesbian News reports.

The proposal by Matt McLaughlin, who lists his address in Huntington Beach, was received by the initiative coordinator at the Office of the Attorney General on Feb. 26. Enclosed was a $200 check and the complete text of his "Sodomite Suppression Act." The act outlines seven measures relating to those who engage in same-sex sodomy, "a monstrous evil that Almighty God, giver of freedom and liberty, commands us to suppress on pain of our utter destruction even as he overthrew Sodom and Gomorrha."

McLaughlin recommends punishment by death, even though a judge ruled that California's death penalty is unconstitutional last June:

Seeing that it is better that offenders should die rather than that all of us should be killed by God's just wrath against us for the folly of tolerating-wickedness in our midst, the People of California wisely command, in the fear of God, that any person who willingly touches another person of the same gender for purposes of sexual gratification be put to death by bullets to the head or by any other convenient method.

The document goes on to push a ban on the distribution of "sodomistic propaganda" (we can only assume he was inspired by Russia, as some note) and on "sodomites" from serving in public office. He also wants the act to be "prominently" displayed in public school classrooms. 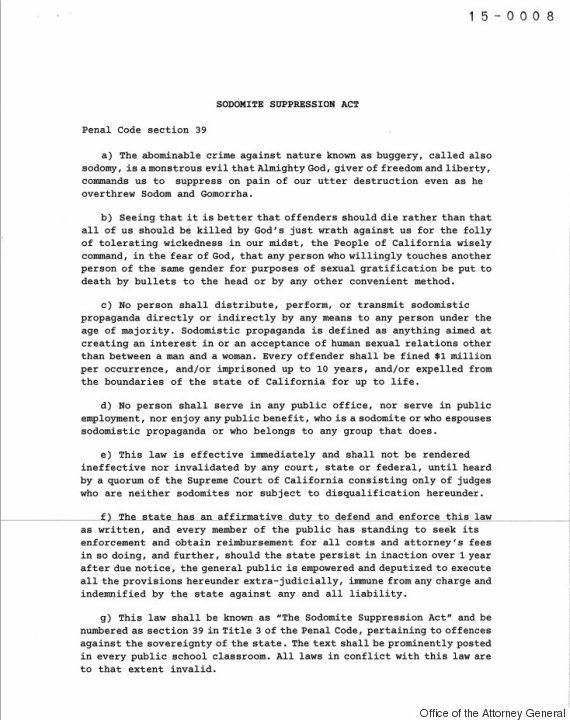 Ballot initiatives were added to the California Constitution in 1911 and allow for voters to propose constitutional amendments and statutes to be voted on by the larger populace. After an initiative is submitted, the sponsor must get signatures from five percent of the number of votes in the most recent gubernatorial election, Wonkette notes. That would be more than 350,000.

Kristin Ford, the press secretary with the Office of Attorney General Kamala D. Harris, told The Huffington Post they are in the process of reviewing the initiative.